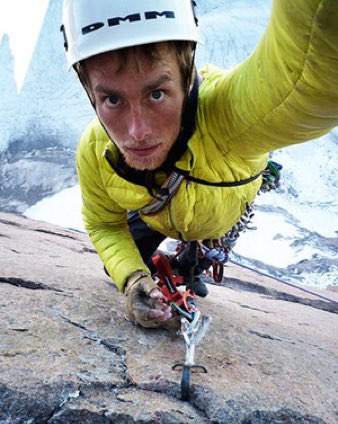 Leo’s name is synonymous with adventure climbing. His success has led to media appearances on Top Gear and to being pitched as one of Britain’s top ten adventurers by The Telegraph. But don’t get the wrong idea, all this media attention is well deserved—Leo is without doubt the ‘real deal’.

Leo grew up in the Lakes and started climbing in 1990 at the age of 10. Just six months later he acquired the taste for adventure climbing when he became the youngest climber to conquer the famous Scottish sea stack, the Old Man of Hoy. By the time Leo was 15 he had become the British Junior Indoor Climbing Champion. In 1997 he moved to North Wales and started to make a name for himself, onsighting bold trad climbs such as Master’s Wall (E7 6b) on Clogwyn Du’r Arddu.

In 1998, aged only 18, Leo landed in Yosemite with the similarly youthful Patch Hammond and made a landmark ascent: a virtual onsight repeat of the Huber brothers’El Niño(5.13c, 30 pitches) just days after the brothers had made the first free ascent.

Back in North Wales he made the first ascent of Trauma (E8 7a) on Dinas Mot and nabbed the second ascent of Bungle’s Arête (8b) on the Rainbow Slab in the Dinorwig slate quarries. The challenge of bold, technical gritstone routes also appealed and Leo showed good form onsighting Deathwatch (E7 6c) at Ilkley and Strangeness (E7 6c) at Caley. However, his true desires lay on the big walls and in 2001 he proved this again by free climbing The West Face of the Leaning Tower (5.13a, 5 pitches) in Yosemite.

In 2002 a nasty 20-metre fall on Cerro Torre in Patagonia put Leo out of action for a year with a badly broken ankle. The story of the fall became the subject of a BBC documentary and opened him up to a whole host of TV and film opportunities, including his very own television show. He returned to Patagonia in 2005 with Kevin Thaw and made the first free ascent of the huge 1400m North Pillar of Fitz Roy.

In 2007, during time off from playing the role of Sandy Irvine in The Wildest Dream docudrama, he summited Everest.

In 2008 Leo was back on the big walls, making the first team free ascent of both the North West Face of Half Dome (5.12, 23 pitches) and The Freerider (5.12d, 35 pitches) on El Cap in a single day—most strong teams would require at least a week to achieve this. The following year saw a free attempt of the mighty North West Face of Mount Asgard on Baffin Island, documented in Alastair Lee’s blockbuster movie The Asgard Project, which went onto win 20 awards.

Then in 2010 Leo topped it all by completing his long-term Yosemite project: The Prophet (5.13d R) on El Capitan is a truly impressive route and one that Leo had tried on a number of occasions since his first attempt in 2001. His completion of the route was a lifetime achievement and a real highpoint in an already remarkable climbing career.

“The A1 Beauty crux of the Prophet is the most perfect pitch I could ever have imagined,” says Leo. “Such an aesthetic line in an unequalled position, so desperately thin and painfully close to my limit. Succeeding on the first ascent is a dream come true. If I never climb anything harder I will not disappointed.”

Changing tack in early 2012, Leo headed for an Indiana Jones-style adventure in the depths of the Amazonian jungle in Venezuela. Here he made a first ascent of the East Face of Cerro Autana. The resulting route, The Yopo Wall, rated E6 6b/A1, was the focus of yet another Alastair Lee film, Autana.

A year later in 2013 Leo led an international team to success on the first ascent of a major new route on the remarkable Antarctic peak, Ulvetanna. The mile-long northeast ridge of the mountain was described as one of 'the last great climbs' and commanded challenging climbing. The final route was given E6 6b, 5.12, A2 (C2) and was completed in some very harsh conditions.

Leo’s biggest project for 2014 was a 3D adventure TV series for the Discovery Channel. Lost Worlds with Monty Halls and Leo Houlding aired in January 2015. In April he was in the Amazon jungle of Guyana and then he went to the Mulu cave system in Borneo where he visited the largest cavern in the world: Deer Cave. While there Leo climbed a new route up a virgin limestone wall in a remote part of the jungle where nobody had climbed before: “Lost World went at E5 6b, with lots of tufas and stalactites, some bolts and a great bivi ledge half way up.”

In 2015 Leo led a team to complete a first ascent on the northwest face of the Mirror Wall, located beyond the Edward Bailey Glacier in eastern Greenland. Leo, Joe Möhle, Matt Pickles, Matt Pycroft and Waldo Etherington succeeded in climbing a new route on the main face of the 1200-metre peak in a 13-day push, climbing 23 of the 25 pitches free.

In January 2018 Leo, along with Jean Burgun and Mark Sedon, completed an incredible expedition to Antarctica. Hauling sleds weighing 200kg, the team skied and snow-kited to make their 100-mile journey. During this challenging 57-day trip the team climbed a new route on the Spectre, one of the most remote mountains on the planet.

Leo is a keen pioneer of para-alpinism, a climbing method he demonstrated on Top Gear when he and Tim Emmett climbed to the top of the Verdon Gorge before base-jumping back to the bottom of the route. Deep water soloing is another passion; check out the film Depthcharge, which features Leo alongside Chris Sharma and of all people, Jack Osbourne!

These days Leo lives with his wife Jess in a quite corner of the Lakes, a peaceful antidote to his adventure superstar day job.