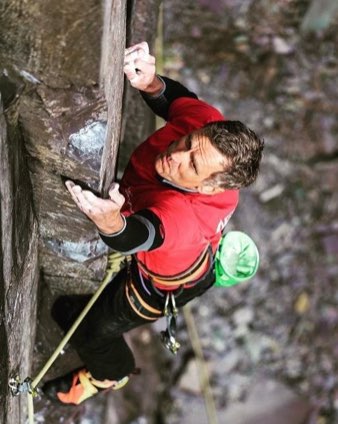 Mick has been a prominent member of the UK climbing scene for over four decades and was in fact DMM’s first sponsored athlete. With an abundance of knowledge and experience in all climbing disciplines, from international competition climbing and high-end sport and trad, to mountaineering and winter climbing, Mick’s long-lived climbing career is nothing short of exceptional. Since first climbing the golden grade of 8a back in 1986 he has climbed at least one route of this grade, or harder, every year since. His impressive climbing resume aside, Mick was also one of the few climbers to pull off Lycra and a well-coiffed hairdo in the eighties; at least part of the reason he earned himself the nickname The Perfect Man.

Mick, who grew up in Preston, Lancashire, first went climbing as a schoolboy and was introduced to bigger crags in the Lake District after showing promise on top rope at the local quarries. According to Mick he “never looked back”.

Memorable early forays into climbing include an ascent of Mont Blanc in the French Alps at the age of 16, his first new route in the Lake District at the age of 19 and spending a month in Yosemite Valley at the age of 20, all of which Mick describes as “character building experiences" that set him on course "for a life of climbing”.

Despite his experience in all disciplines of climbing, Mick is perhaps best known for his sport climbing—and for good reason! Mick was one of the first climbers to tick an 8a sport route only a few years after the grade was established in the early 1980s and when it was the absolute limit of modern sport climbing. Since then he has accumulated an incredible tally of eighth-grade routes:

“I have always pushed myself to train hard, climb as hard as I can every year whilst raising a family and holding down a demanding full-time job,” says Mick. “To date I have achieved at least that grade [8a] or harder every year since 1986!”

Part of Mick’s longevity and continuous high standard of performance is due to his dedication to training, which he got into after an attempt on Circe (E5 6b) at Stony Middleton in the Peak District early in his climbing career.

“The route was an early challenge for me towards the end of a season in the early 80’s,” recalls Mick. “I’d summoned up the courage to break into the E5 grade but when I fought my way to the end of the traverse line on undercuts and slippery foot holds I just didn’t have the power to finish it, to make the final pull to easy ground. The winter that followed was when I decided to do something about it and began to train ‘properly’.”

Subsequently, Mick, who was working as a joiner, constructed a secret training facility consisting of a pull up bar and various bits of wood screwed to the old beams. He set himself the target to get pumped (whilst at work!) twice a day, four days a week—excluding Friday, which was a rest day in preparation for climbing at the weekend.

“Religiously over that winter I disappeared twice a day to get my fix,” says Mick. “Needless to say the following spring Circe was pulled into the ground!”

Mick also contributed many notable new routes to British climbing, including Twisted (8a), Conceptual Continuity (8a), Energy Vampire (8a+) Climb of the Century (8a+) and Wicked Gravity (8b) at Malham Cove, The Vanilla Path (8a+) and the classic Biological Need (7c) at Kilnsey, Mirage (8a) at Gordale and Meltdown (E7 6b) in the Lake District.

“I have never been an avid new-router,” explains Mick, “but I’m always keen to explore obvious gaps sometimes on obscure crags like Craig Dorys where repeat ascents may be rare, but equally on mainstream crags like Malham, Kilnsey and Gordale where people will be queuing to add a little more polish to sought after routes.”

“Thirty or so new routes is a small contribution to British climbing,” he continues, “but nevertheless I am proud of my legacy to the sport.”

Mick took early retirement in 2015 from his position as Corporate Director for the Environment at Preston City Council and now lives on the Llyen Peninsular in North Wales, where he has turned his sport climbing prowess to trad climbing, making some early repeats of top-end routes like Bam Bam (E8 6b), Requiem for a Vampire (E8 6b) and Pushing for Rail (E8 6b) at Craig Dorys. In 2018 Mick made some of his own impressive(ly scary) contributions to the infamously chossy crag: The Mudshark (E8 6b) and Destiny (E7 6b). The Mudshark in particular stands out for Mick as having both personal significance and as a significant contribution to the notorious crag:

“When I first stood at the foot of the mighty Stigmata Buttress I could never imagine climbing any route up such outrageous territory, let alone a new route!” says Mick. “[Mudshark] starts up Rust Never Sleeps—a serious E6 in its own right—then from the relative sanctuary of the base of its groove the climb breaks out onto the left arête and follows this in its entirety to the top. The first part of the arête is steep and powerful and protected by only a pair of stacked pegs (30mm long) in a thin, dusty seam and a single wire that is really tough to place. From then on fingery, tenuous climbing on very snappy holds may lead you to the top!”

Mick certainly shows no sign of slowing down and is still living up to his Perfect Man status, showing up the young guns on testpiece eighth-grade routes like Master Plan (8a+) at Pen Trywn, Central Pillar (8a) at Castell y Gwynt and Marihuana (8a) in Siurana.

“Whether sport, bouldering or trad, it’s all about the next route or problem,” says Mick. “I am, or have become, very systematic in my approach to all aspects of the sport, whether that be technique, training, eating, resting or redpointing.”

“I think my attitude towards climbing has developed over time rather than changed,” he explains. “What started out as a nice thing to do for a day at the weekend has now become a way of life.”