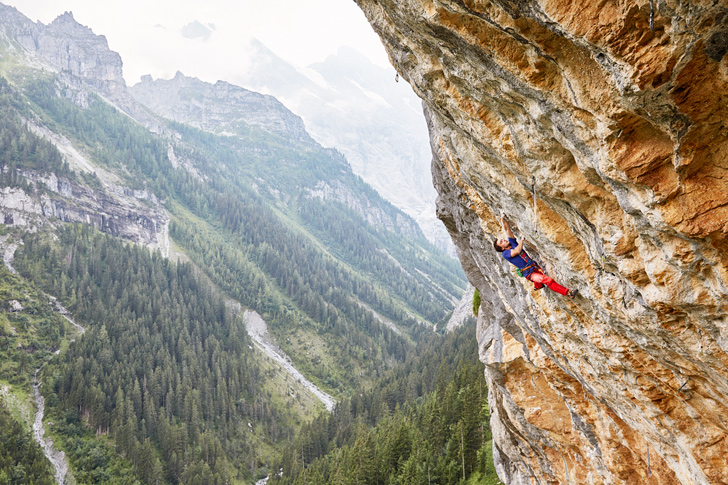 After repeated visits over three seasons to the Swiss sport crag of Gimmelwald (near Interlaken), Andy Winterleitner has realised his goal of redpointing Jungfrau Marathon and climbing his first 9a.

He said: "To climb Jungfrau Marathon I invested a lot of time and patience. The feeling that my preparation was good and the work comes to an end is nice. Now I can take some days off and drink a glass of wine with my girlfriend. Then I can try all the other projects I have on my list."

Describing the successful day on July 21st, Andy said: "Usually it is too warm for climbing in Gimmelwald on hot summer days. Anyway, I went with my girlfriend in the afternoon to have a look at my project. Because of a strong storm with heavy rain we became completly wet, and were glad to arrive under the overhang. After the storm, the air was cool with the wind. It was quiet and special weather. Nobody else was there."

"I felt really calm. On my first try I climbed the initial section perfectly, did well the hard boulder in the middle and the head was ready to fight for the last part which burns your body out. This go was perfect and I couldn’t find some words after clipping the anchor. No shouting of joy and reaction. Just sitting on the floor and crying for a moment. Overwhelmed to have finished a long business."

For Andy Winterleitner this route had been his main focus for the last two years.

"Always travel to Gimmelwald and trying the route again and again needed a strong will. It is also really frustrating to deal with the weather conditions at this place. Some months of only training indoors the last winter, doing a lot of bouldering and campus board sessions were important for my success. For doing this the mental part was really important and sometimes I have struggled to just hang on plastic holds."

First climbed by Simon Wandeler, the 20 metre power-endurance Jungfrau Marathon saw its first repeat earlier this summer by Jonathan Siegrist during a Swiss sport crag tour. He described the climb as a "battle" route with "only one poor rest, punching from the start to finish."