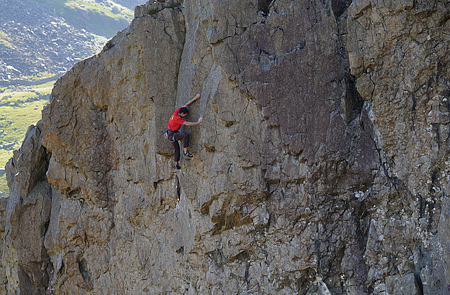 Nick Bullock has made what is most probably the second ascent of The Trumpet Slappers E7 6c on Scimitar Ridge (Esgair Maen Gwyn) in the Llanberis Pass. Starting up The 39 Slaps (E7 6b) to just after its crux, The Trumpet Slappers then heads left with the hardest move being reaching the arete on The Trumpet Blowers, which is then followed to the top. An old Adam Wainwright project, Jack Geldard made the first ascent in 2006 after top roping it.

Nick Bullock also chose to headpoint it and although having previously led The 39 Slaps twice before without any drama, he fell off its crux for the first time while leading on his initial attempt at The Trumpet Slappers yesterday. Fortunately the top peg (backed up with IMPs) of the four up to there held. After a rest and with his confidence in the gear boosted Nick got it next go.

Nick said: "It's amazing climbing, all really pumpy and physical with lots of back-hands and side-pulls. I had quickdraws already on the pegs but placed the remaining kit of two wires and a skyhook on the lead. Although the compact rock on Scimitar is generally solid holds do unexpectedly break which is at the back of your mind."

Nick added: "When I come back from an expedition I like to have a couple of projects to get me fit and doing a route in this style, although it could be better, is great training for onsighting or doing hard trad routes ground up. I'd rather do this than getting fit by going sport climbing as it's prepares you better mentally and all that static hanging around fiddling in kit gets you in the zone."

You can read a personal account of the story behind Nick's ascent on his blog.