Reflections on the Slovak Direct 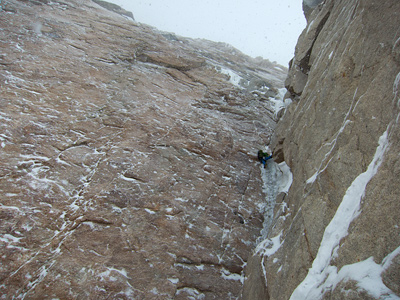 Nick Bullock has had three weeks to reflect on the Slovak Direct since getting back to Wales from Alaska. A good time we thought to put a few questions to him about the trip.

How do you now feel about the experience?

As an experience The Slovak fits into the full-on excitement and very committing category but it was never horrific like Fear and Loathing on Jirishanca. The route is a big mountaineering experience. You don't finish the route and abseil back down to your gear at the base. After 5,500 ft of technical climbing you've got 3,500 ft of easier climbing and the Cassin Ridge to Denali's summit (6194 metres) before descending the West Buttress route. In some ways it felt bigger than some of the Himalayan Faces I've been on.

How were the conditions on the Face?

Conditions were good on the face apart from the weather. It started snowing mid-morning on the first day with high winds above us but fortunately cleared up. Then on the second day it started dumping with snow which caused loads of spindrift and it got progressively worse. When we were nearing the top of the Slovak Andy Houseman really had to battle against the spindrift avalanches to make progress. On the Cassin we just crawled into the tent for six hours to warm up and get a brew. We didn't bother using the tent poles so it was like an oversize bivvy bag. Then we carried on for several more hours before the wind pinned us down in the tent (with poles) for sixteen hours.

You must have begun to get concerned about being stuck there?

We'd been going for nearly six days if you included the approach, we were nearly out of food and energy reserves were definitely low. For me it was the most serious part of the route. It was one of the few occasions in the mountains when I've thought if the weather didn't improve it could have become life threatening very quickly. The altitude and weather on Denali is definitely as savage as people describe it. In the six weeks we were there we only had one settled spell of weather - six days when we did the West Buttress to acclimatise and rested.

How difficult was the climbing?

In general it was quite sustained through fantastic mountain terrain. The whole 24 hour daylight thing makes life simple on the route. You climb when you want, but not so useful when you wanted to sleep at the 14,000ft camp.

There was the first day crux: steep rotten ice and a mixed pitch that felt around Scottish VII,7 with a bag on. The obvious icy corner in the middle of the face we climbed in three pitches [see top photo] at around WI 5+ but there was a dry tooling pitch above which had never been freed and we'd been told would probably go at around M8. I tried to free it but ran out of gear five metres from the end of the hard climbing and didn't fancy running it out. The 40 metres to that point was around Scottish VII,8 and it wasn't much different above. The thought of possibly breaking an ankle in a fall in that terrain wasn't attractive. I lowered off and Andy climbed it using the original style given A2 by the 2nd and 5th ascentionists. There's also the option of descending to a ramp line to the left.

It was the sixth ascent and the first British ascent of The Slovak Direct but there was still a lot of interest in your ascent. Were you surprised and how accurate was some of the reporting?

There was a lot of interest in it because of Steve House, Mark Twight & Scott Backes ascent in 2000 which was at the forefront of single push alpinism. They had the balls to go single push, with no sleeping bags or tent, on a route that had only just seen its second ascent by top class alpinists 14 years after being established. Mark's writing about it really put the route on the map. Then the Giri-Giri boys enchained it with The Isis Face in a eight day push. So basically it's one of the big hard out-there routes on Denali. Steve House said it was his first world class route.

Some of the reporting on the web was totally inaccurate. Apparently, and wrongly, we'd completed it in a record time according to several sites. The media want headlines and sponsored climbers are definitely guilty of fostering a climate of competition against the clock. For me mountaineering it's not about speed ascents and records, it's about personal experience. When I start to climb being bothered about beating records and the clock I'll give up.

Was the route irreversible from half-way up the Face as suggested?

No, it'd still be possible to abseil but you'd get through an awful lot of your kit. Possibly be down to using your boot laces for Abalakovs. You do reach a point where it'd definitely be quicker to continue up to the Cassin Ridge and reverse this or carry on over the top if you got into the trouble - neither of these options are to be under-estimated.

Any particular moment that stays with you?

When we descended the West Buttress it was empty apart from just the Rangers coming up from 17,000 ft. The weather had been so bad it 'd kept the crowds away. They'd spotted us descending and were punching the air to acknowledge our success in that very un-British way, which was quite heart warming. That West Buttress route is an eye opener in the way it attracts the crowds from the very experienced to the very inexperienced, including super-rich seven summit baggers among them.

You weren't even intending to go to Alaska this summer?

I was setting up for a summer of rock climbing and it was only when Andy's original partner dropped out that the phone calls started, to try and get me to change my plans and join him for an Alaska trip. But when Andy said The North Face were picking up the tab and he'd decided he wanted to try the Slovak, of course, I had to say yes. Since getting back to Wales my performance on the rock has been as bad as I expected: sore toes, sore fingers and pumped forearms but its makes some of Joe Brown's E2's very memorable.

Where you off to next?

I'm planning to head off to Nepal next October/Nov with Andy, after my first book, Echoes, comes out on the 3rd September. But we still need another £5k. We're looking to try a new route on the North Face of Chang Himal. 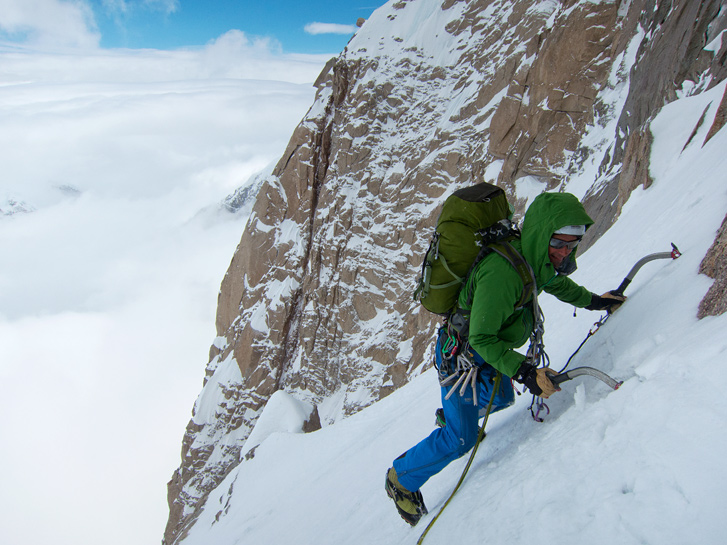