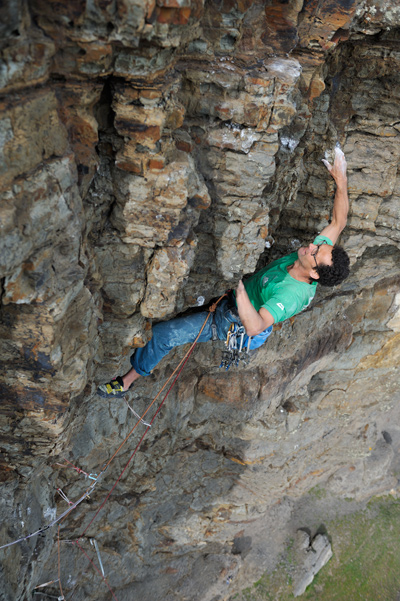 Nick Bullock made the most of this week's promised one day of good weather by getting even with Leigh McGinley's Box of Blood (E7 6b) at Craig Dorys on the Lleyn Peninsula.

Last Friday he'd fallen off the headwall crux just a few moves below the top. Pulling back-on he finished it off but for Nick a rematch was the only option. The thin crack in the headwall is the technical crux but the steep, loose and run-out lower two-thirds of the route is definitely the mental crux.

On Twitter Nick wrote: "Round one goes to the climb; crumbly, run-out, overhanging. 40 metres of madness... must get fitter. Round two hopefully later this week."

On his return Nick found that bit extra in his arms to ensure success and had even swapped some cams for Torque Nuts to save a few grammes. Nick said: "The climbing is magnificent and one of the best routes at the crag. I can totally understand why Leigh said it was the best new route he'd ever done. If the rock was trustworthy the flowing and airy moves would be really pleasurable."

He added: "An awesome effort by James McHaffie making the second ascent onsight last year, especially with it being unchalked. But then he is light years ahead of everyone when it comes to gnarly onsight trad."

Nick opted to top-rope the route the first but place all the gear on the lead. On the first ascent the route was cleaned and inspected by abseil and three wires were left in place on the headwall from an earlier attempt.

The fourth ascent followed immediately after Nick's success, as Will Sim, who'd belayed Nick both times on Box of Blood, stepped in to make an impressive flash of the route.

You can read James' account of his onsight in the second half of this blog post. Nick's blog piece, 'Bones and Barbed Wire', describes his first route at Dorys, Bobok with James McHaffie, and ten years later on Box of Blood, discovering that "the fear induced by this crumbling cliff" is still there. 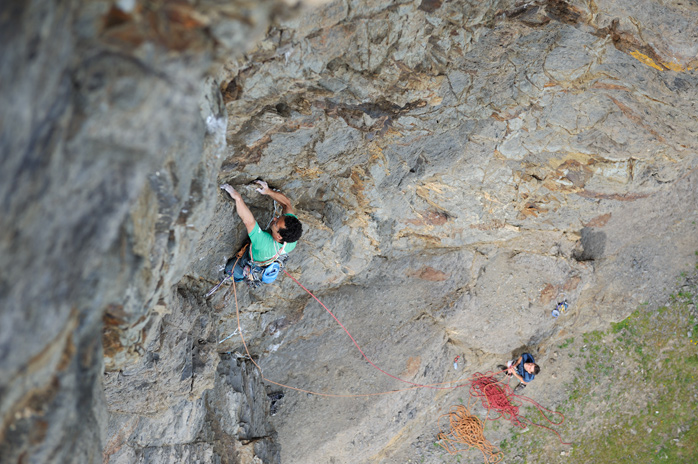