In 1998 Paul Pritchard suffered terrible head injuries when he was hit by a TV-sized block on The Totem Pole sea stack in Tasmania. His slow recovery left him without the use of his right arm and only limited movement in his right leg. The damage continues to play tricks with his memory and speech. Paul writes:

During my regular Botox injections, to help reduce the stiffness or ‘spasticity’ of my muscles, I’m required to fill out a fall report. “Have you fallen in the last four months?” The form is referring to falls at home, or perhaps in the street. I didn’t want to say I had taken numerous leader falls while rock climbing and anyway there was no box for it.

Having hemiplegia—paralysis of one side of the body—really sucks, your body won’t do what you tell it to do, and, in my case, my thought processes are all mixed up. This makes it very difficult to plan anything, or keep a relationship going for that matter. But my drive for adventure and challenge is undiminished.

Eleven years after my catastrophic accident on Tasmania’s Totem Pole I made my first lead climb at Arco in Italy. It was very easy, grade-wise, but gave me the exact feeling that I got from my hardest Red Wall routes at Gogarth.

“The climb I made is very easy for those with two arms but nowadays I don’t climb for difficulty—walking down the street is difficult enough.”

Since then I have led climbs but never established a new route, and that is what used to make my mind and body tick. It is very creative, to go where no climber has been before. Creation is what makes life real for me. In the past, I always lived for creating new routes whether it be at Gogarth, on El Capitan or the big walls of Baffin Island—and then of course you get to give the climb a cool name and put your grade on it.

The city I made home, Hobart in Tasmania, only has one climb within its boundary that is easy enough for me—all the crags are just too steep for a climber with only half a functioning body—even Johnny Dawes would struggle to climb an overhanging wall one-handed.

However, when I bought a house with my partner on the beach, one hundred metres away from a three-kilometre long unclimbed sea-cliff (only in Australia) I set to exploring the possibilities. And, behold, I discovered a huge section of cliff that had a mean angle of about 70 degrees and was slabby enough for me. I thought to myself “living at the arse end of the world ain’t all that bad.”

I found the perfect climb, challenging enough and not too difficult as to be injurious to my one functioning shoulder. Although to be honest I’ve found no climb to be boring one handed. Not being able to safely drill from abseil, I got my mate Conrad to equip the climb while I stood below ‘offering’ advice. And this August, we were all set to go.

The day started badly. I fell in the dark as soon as I got out of bed, though this is not unusual. What was unusual was that it was the first time harnessing up in the kitchen. After coffee we slung our ropes over our backs and walked out the door. I fell two more times on the shoreline, even though I used a stick to hobble to the base of the climb. The day didn’t seem to be going my way.

I began the climb very badly and fell onto the first bolt. I then lowered to the ground, shut my eyes, calmed myself down and climbed it in a single push. However, my leg often went into spasm and pin straight, with my crooked arm getting in the way, right up until the third bolt. But, my body did relax from the movement—climbing is good for relaxation of spastic muscles—and I finished the climb smoothly. Once at the belay I looked over my shoulder and saw two seals frolicking around. I was home.

I named my new route on The Alum Cliffs 1 AU. 93,000,000 miles is 1 astronomical unit and I now live in Australia and it is my first new climb in my present body. Also, AU is the symbol for gold on the periodic table. The climb I made is very easy for those with two arms but nowadays I don’t climb for difficulty—walking down the street is difficult enough. But it felt good to be back new routing again after all this time. 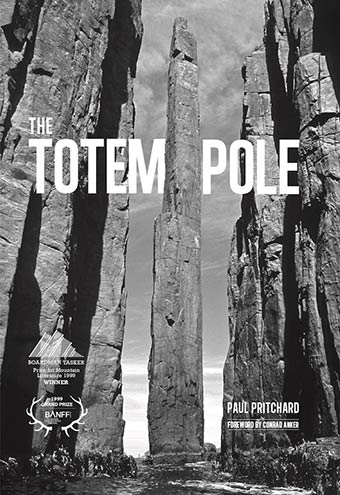 Paul’s appalling brain injury and the year spent locked in his body and a rehab centre formed the basis of the award-winning book, The Totem Pole. Recently Paul produced a 20th anniversary edition with extra photos and original text. It is available to buy on Paul’s website.