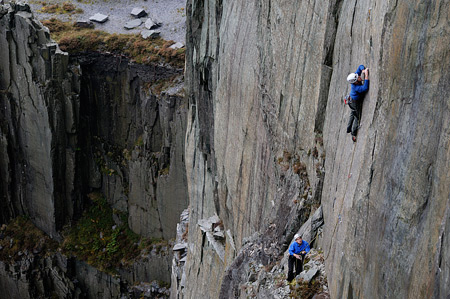 Twll Mawr in Dinorwig Quarry continues to be the focus of new route activity on north Wales slate. Ian Lloyd-Jones, partnered by Sion McGuinness, has climbed a 133 metre route that is surely the UK's longest sports climb. The Rock Bottom Line (6a/b, 7a, 6b, 7b+, 7b) heads directly for five pitches up the full-height of the West Wall to the right of The Quarryman.

The route is equipped with fifty-three bolts including double bolt belays. Fortunately for Ian, Jim Titt from Bolt Products donated the expansion bolts featuring what his website describes as: "The innovation in bolt hangers in the last 30 years!" Starting at the lowest point of Twll Mawr where the West Wall joins the North Wall, The Rock Bottom Line begins with a pleasant slabby corner. The stand-out pitch is without doubt the fourth one, taking a smooth green groove. Ian, who has probably climbed more new routes in the Dinorwig Quarry than anyone, said: "That groove is probably the best pitch I've ever added to the slate. I just can't believe it hadn't been climbed before as it is so obvious. It's like a beginners Quarryman groove." 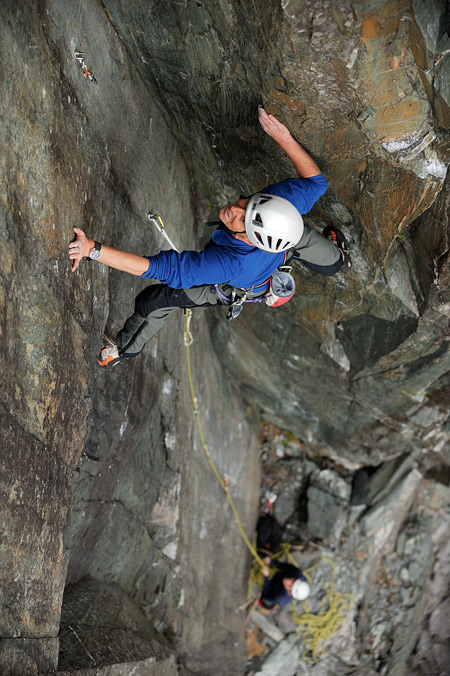 Ian added: "It was the final pitch that first drew me to have a look, but then when I dropped a rope down it I was amazed to see the groove and that's when I thought about a route taking the whole height of the wall."

Conditions, although atmospheric, were far from ideal for the ascent with strong gusting winds and an intermittent fine drizzle. Ian said: "Pitch three got particularly wet and at times the top of the hole was lost in swirling mist. Waiting at the bottom of the groove it became so dark I feared the heavens were going to open but we got lucky."

The bottom of Twll Mawr can be reached by walking through the Peregrine Walls tunnel, found a couple of hundred metres past the Golgotha slab (level below the Monkey Bar sector – Patellaectomy). From the finish of Rock Bottom the best way off is to walk uphill until the hole of Mordor is on your right then head diagonally over broken slate to come down past Seamstress Slab.

This is the third multi-pitch sports route the pair have recently added to Twll Mawr with Supermassive Black Hole and Black Hole Sun instantly proving popular. The Rock Bottom Line takes the title of the UK's longest sport route from the four pitch Castles Made of Sand at Cheddar Gorge described on UKC as 120 metres and 105 metres.

Ian Lloyd-Jones would like to thank Bolt Products, DMM and Cotswold Outdoor for their support on this project.

Update: The following day Calum Muskett repeated the route confirming the grades and in particular praised the quality of climbing on the groove pitch. 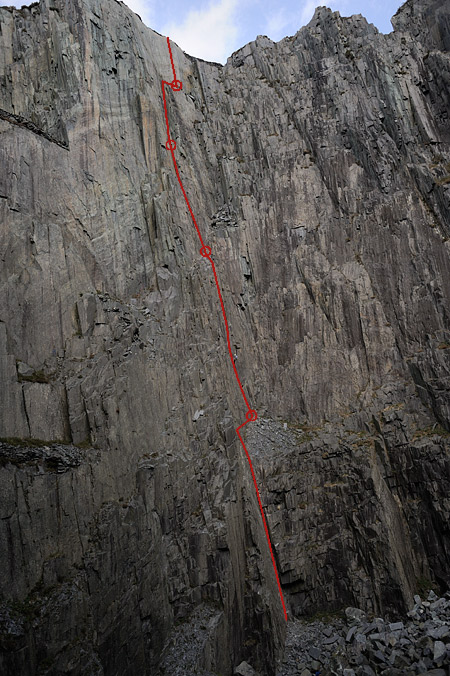 P1. 6a/b 30m Climb the slab in the corner with some bridging. Clip the high ninth bolt and carefully traverse right avoiding the scree ledge to a double bolt belay.

P2. 7a 28m Take the obvious crack and flake line, easy to start, with a hard move over a bulge near the top to a ledge and double bolt belay where Opening Gambit used to cross.

P3. 6b 30m Probably the poorer of the pitches. The slab/wall to a ledge at the foot of a short groove and possible belay but better to continue up the arete on good rock to the right (3 bolts) taking you to another ledge.

P4. 7b+ 25m The immaculate green groove above beckons - hard at the start. A beginners Quarryman groove. Shared belay with The Wonderful World of Walt Disney.

P5. 7b 20m Take the flake/crack system up the attractive bulging slab/wall. The thin crack doesn't take fingers very well. Crux is a high step up right using a poor smear for the left.