22 August, 2014
Floppy haired and wide-eyed as he talks excitedly about his forthcoming Yosemite trip, 21 year-old Andrew Cherry epitomises the exuberance of youth. For the past year he has been on a work placement at DMM as a graphic designer, but for the coming month before heading back to Nottingham Trent University to finish his course, he plans to turn his big wall dreams into reality.

Neither Andrew or his climbing partner, Stefan Morris, have any big wall experience. It's highly unlikely the pair will set any speed records, climb any new routes or free any aid lines but for them the trip will be just as remarkable as for any 'rock-star'. Andrew and Stefan are simply your everyman climbers; there can't be many climbers out there who haven't aspired at some point in their lives to climb the granite monolith of El Cap.

Before Andrew shut-down his computer and left the office we asked him some questions about the trip and in particular his preparations...

You've only been climbing for two-and-a-half years so when did you have the idea to go and climb a big wall in Yosemite?

Not long after I started climbing. It was on my first proper weekend climbing trip away about two years ago with Stefan. I'd just led my first E1 and we just said to one another if we find a portaledge for a good price then we'll go and climb a Yosemite big wall. It's a total dream destination and we reckoned it'd be a good place for big wall newbies because it's so accessible.

So I take it you found a portaledge?

Yep, at the start of this year we heard that a friend of a friend was selling a double ledge and fly for £400 so we bought it and the air-tickets shortly after. We then realised that our normal racks weren't going to be enough and needed to get a load more hardware. Buying kit for this trip is where my pay-cheques for the last eight months have gone.

What's on your Yosemite wish-list?
The Nose obviously and the Salathé are top of our list but the overall goal is to get to the top of a big wall no matter how long it takes or how much we whinge. I don't think it'll be easy but I don't think we'll run away as soon as it gets tough. We're definitely expecting it to be a lot of hard work.

You've done a lot of preparation for the trip and been spotted sleeping in unusual places on a portaledge?

We realised we needed to get some practice in setting up the portaledge after using it for the first time. Having abseiled into Twll Mawr and set the ledge up it collapsed at six in the morning when I went for a leak. We hadn't tensioned the straps on the bed properly so the frame popped open. It was a real shock for Stefan who was still asleep.

Another time we did what must be the slowest ascent ever of Clash of the Titans (F6a) in the slate quarries. We started at 8 p.m. hauling a full-weight bag and the portaledge up to half-height, where we spent the night, before leading out the next day at 8 a.m.

So you did quite a few north Wales routes in a big wall style?

The Desolation of Smaug, a six pitch sport route in Twll Mawr, was particularly memorable: block leading it three times in one day with all our big wall kit. It was a good experience because we had to learn how to babysit the haul bag and stop it getting jammed under overhangs. The haul bag got pretty trashed and the sharp edges wore our rope through to the core.

What about aid climbing and big wall technique?

We've practised pendulum swings, lower-outs and done a fair amount of aid climbing. Reckon we should now be ok on the Nose's King Swing. I led the The Very Old and the Very New (C2+/3) protected by a slack top-rope, which was just as well, since pieces pulled on me plenty of times before I finally got it clean. I also tried Pain Killer (E3 6a) in the Lost World as an aid route.

Where did you find your big wall info?

Mainly from Supertopo and watching Chris McNamara's videos. I remember early on, after deciding to go, reading 'Big wall Tips from McHaffie and Muskett' and asking Leo Houlding for some advice, to which he basically replied: "Avoid the cluster f***." I also read a lot of the El Cap accident reports and scared myself stupid.

How do you feel about your year in north Wales?

Being part of the local climbing community has been fantastic; it's a great scene and I'll miss it. It has definitely been good for my climbing. Since moving here I've gone from E2 and 6c+ to E4 and 7b. With all the big routes to choose from it does wonders for your psych and really makes you want to try hard. I've also had a couple of wake-up calls such as falling off Weasels Rip My Flesh (E4), snapping the second peg and being dumped on the deck. Luckily I was able to walk away with just a bruised heel.

You can follow Andrew and Stefan's trip on their blog - The Frictitous Adventures of Stefan and Andrew - and it's worth watching this short vid where the pair consider if they're ready for the trip of their dreams. 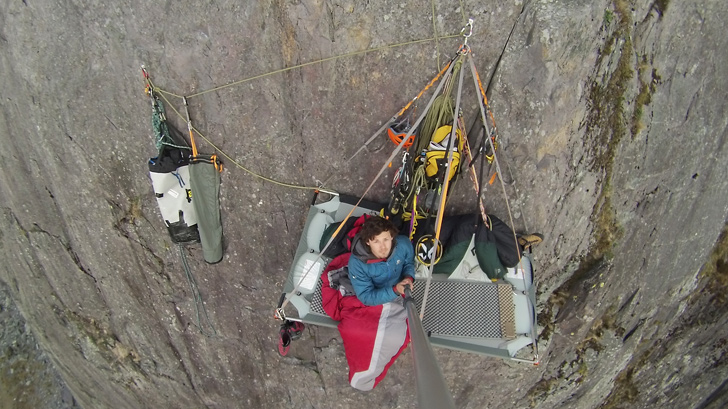