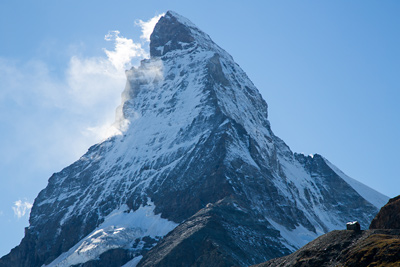 Few mountains in the world are as instantly recognisable or inspiring as the Matterhorn (4478 metres) on the Swiss-Italian border. It's easy to understand why its summit is on the wish-list of any mountaineer. This year is the 150th anniversary of its historic first ascent by Edward Whymper and his team on the July 14th 1865. Only three of them survived the descent.

Dougal Tavener, in his work as a UIAGM guide, has climbed all the classic routes many times. Below, he outlines what is involved and gives some advice on preparing for tackling the Matterhorn by its most popular and easiest route, the Hörnli Ridge.

"Firstly, to climb the Hörnli ridge in a safe and enjoyable manner I think it's really important to have more than enough experience for the route. Give this mountain the respect it deserves. The Hörnli is well over a 1000 metres long and despite being technically straight-forward the route shouldn't be underestimated.

When you’re high up on that mountain you appreciate how far from home you are. There is a good reason it took so long for this mountain to be climbed!

You should be comfortable with exposed AD (III) - ridge terrain. This is equally important in both ascent and descent; with and without crampons. Experience of route finding on complicated alpine ridges is necessary as this is one of the hardest things about the Hörnli.

Also, knowing what to do with the rope and making sure whatever you are doing with it, is safe. To climb the Hörnli safely in a reasonable time you need be nothing less than a short-roping Jedi, being able to make quick decisions between fixing the rope or moving together. You should never actually feel that you need the rope, but it should always be there and used in a way that would protect you in the worst case scenario.

Being fit enough and acclimatised for a route like the Hornli can mean a much more enjoyable and safer experience. Without a guide the Hörnli ridge can take around 12 hours and all of this on exposed srcrambling terrain.

The best training would involve focusing on moving over this kind of terrain fluently and safely. Being efficient can make a massive difference over 12 hours! An ice axe martial art course might come in handy in case you try and overtake a Swiss guide!

Good training routes for this would be things like: Cosmiques ridge, Traverse of the Aiguilles Marbrées and the Aiguille d'Entrèves Traverse.

Due to the popularity of the Hörnli, the Zermatt guides have devised a ‘pecking order’ for safety and to minimise queues. The rules are: Zermatt guides leave the hut first, then other mountain guides and then independent climbers. At first I thought this was unfair, but actually now I think it's essential. If the first teams to leave the hut are slow or take a bad route it can cause problems with other parties following and going the wrong way. This can cause frustration and potentially dangerous traffic jams.

The Zermatt guides climb the Hörnli ridge with clients ‘back to back’ most of the season and know the ‘up-to-date route’ better than anyone. They also have a strict turn around time, meaning that generally it is unlikely that they will slow you down too much. Usually if they have not reached the Solvay Hut within 2.5/3 hours they will turn around. No matter how slow they are, they might not be particularly forthcoming in letting you pass.

If everybody willingly allowed faster parties to safely overtake, then the mountain would be a nicer safer place. Sadly this is not always the case. When parties behind have to initiate overtaking problems can start.

Route finding on the Hörnli is not easy and can make the biggest difference. Personally I have never found it particularly useful on routes of this length to be constantly checking a guide book description or topo. The first time I do a route like this I study whatever literature is available and then once on the mountain I try, where possible, to rely on experience and common sense.

If you are ‘on route’ on the Hörnli then the rock is relatively solid and compact, probably as a result of the traffic, ‘off route’ it can get pretty scary and loose! It is best to abseil or be lowered when descending the fixed rope section below the summit ridge.

In the old hut the doors were locked until the Zermatt guides had gone and you had to queue on the stairwell behind the door. Before getting in the queue you should be roped up and 100% ready to go. It is good to get in the stairwell queue early and be the first unguided party in the queue, leaving you behind a guide.

Your own pace is also important! Only you can decide this. Definitely steady and controlled. Where possible try to keep your breathing/heartrate at an aerobic level (should be able to talk).

With good clients and in good conditions I have needed around 7hrs on average for the round trip. This year I did it with an exceptional client in good weather, but with snow from half-way up it took 17hrs to the summit and back to the hut! The only other person to make the top that day went down in a helicopter. Planning a night in the Solvay Hut (4003 m) is not allowed. This is an emergency shelter and should be kept as one.

In my opinion the most important piece of equipment to consider for climbing the Hörnli is the right set of boots. In good condition the Hörnli is climbed to the shoulder without crampons. This is almost three-quarters of the route and is only rock scrambling to this point. Having a good set of flexible/lightweight B2 boots makes this much easier.

An ice-axe is generally only needed on the summit ridge after the fixed ropes above the shoulder, otherwise 80% of the time it's in your rucksack. A Cirque axe would be fine.

A lightweight alpine harness is ideal. Obviously, don't forget your helmet and crampons.

As a guide, rope-wise I use a 40 metre single rope. It is a rocky ridge so a single rope is a must. Techniques for guiding the Hörnli vary, but for myself and most other guides I know, 40 metres of rope is adequate. This should be the same for anyone else but taking a 50 metre rope to give an extra buffer might come in handy if there is something you are not comfortable down-climbing.

This year is the 150th anniversary of the Matterhorn's first ascent. To celebrate this the local authorities decided to modernise the Hörnli Hut which has meant it has been closed during 2014 but is scheduled to reopen July 2015.

To make an ascent the weather window needs to be absolutely solid and there should be no fresh snow on the route. If the Swiss guides aren’t going then generally this is a good sign not to go either.

It is also probably one of the most expensive huts in the world - 150 Sfr for a night's stay. The best time to climb the Matterhorn is usually mid-June to mid-August. You can get information on conditions in the Alpincenter-Zermatt.

On the day before you plan to climb the mountain, it is a good idea to arrive at the hut early, in order to check out the first section of the route in daylight. I would recommend going as far as the second couloir. In the morning, knowing the route to this point, will be a great help in the chaos and darkness of a Matterhorn mass start.

Zermatt is a beautiful place to stay but extremely expensive. Unless you really want to stay in Zermatt I'd arrive in the morning, have a look around the town, then take the lift up to Schwarzsee and walk straight up to the Hörnli hut (2hrs).

It is also possible to stay at the Schwarzsee Hotel. From here there is the great option of taking the Kleine Matterhorn lift and doing the traverse of the Breithorn.

I hope sharing some of this info helps and gives people a feel of what climbing the Hörnli is really about. Good luck if you have a go."

Dougal Tavener is an UIAGM Guide based in the Alps: dougaltavener.com