Carabiners are incredibly strong used correctly. However, it is worth being aware of ways that carabiners can interact with bolts that will dramatically compromise their integrity, and how this feeds into their design.

Hooking-up on the more traditional style of bolt is an example of this: where the square edge of the hanger gets caught in the notch of the nose and sits there in a weakened cross-loaded orientation.

A clean nose design with a steep top bar can't hook-up in the same way as with some biners that have a notch in the nose. Carabiners such as the Shadow, Alpha Sport and Alpha Trad, that feature in the video, will slip back into the correct orientation, with the gate closing when a load is applied. If the biner stayed hooked-up, then not only is the gate open, but the load is well away from the major axis. Tests with an 85 kg dynamic load and a .85 fall-factor showed carabiners failing in this scenario at between 3.2 - 4.1 kNs.

This is one of the reasons why all of DMM's sport climbing biners feature a clean nose and our wire gate trad orientated biners are made with a clean nose or as small a notch as possible. The Phantom, for example, has a minimal notch in the nose making it actually quite difficult to hook-up. A carabiner should ideally be loaded along the back-bar with the gate closed. Unsurprisingly, among the Phantom, Spectre 2 and Thor, the latter with its high gate-open rating (11 kN) and extra security, performed best in both the static and dynamic tests. 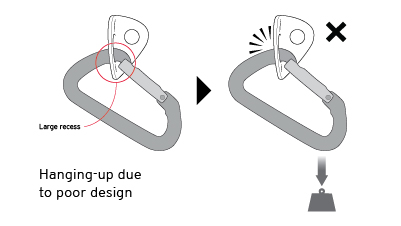 It's possible a poorly thought-out biner could hang-up on a bolt hanger by 'catching' in any space between the closed gate and the nose, once again loading it in a weakened orientation. We design our carabiners to minimise this risk - with tight gate tolerances - and in our tests for this video we couldn't get any of our biners to hang-up.

Jerky movements of the rope and quickdraw, such as trying to pull up slack when there is resistance could, if you were very unlucky, cause the body of the biner to flip over the top of the bolt and unclip in the event of a fall. If this is hard to imagine or sounds far-fetched then take a look at the video towards the end.

This scary possibility applies to both solid gate and wire gate biners clipped to either the traditional hanger bolts or the glue-in variety. Having the 'bolt biner' loosely held by the quickdraw helps prevent rope movement being transferred to this carabiner and moving around on the bolt. A good reason to ensure you don't accidentally use a quickdraw upside down with the captive 'clipping end' of the quickdraw on the bolt. Such inadvertent gate opening is a reason why we use a spring tension that is firm and consistent across its whole range without being stiff.

All three scenarios involve an element or elements of poor design, bad luck, lack of awareness or simple user error. The case of accidental unclipping, it has to be stressed, is unlikely but it'll never hurt to ensure your quickdraws are correctly orientated on fixed protection such as bolts. Features such as a steep top bar, tight gate tolerances, clean nose or minimal notch, firm spring pressure etc. are all there to help ensure a carabiner is used as intended.