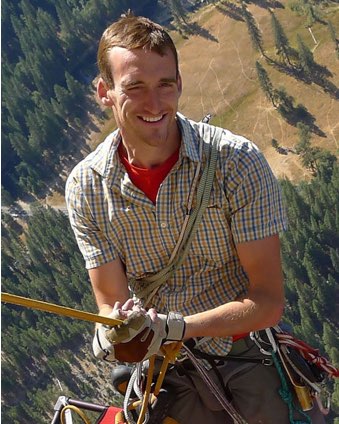 Dan McManus is one of the unsung heroes of the British trad scene. His onsight approach to hard trad embodies the aspirations of British climbing culture, and has resulted in onsight and ground-up ascents up to E8. Dan’s love of trad climbing has led him to make multiple free ascents of the most famous big wall of them all: El Capitan.

Growing up on the Lleyn Peninsula of North Wales and going to school in the seaside town of Porthmadog, Dan was perfectly placed for an introduction to trad climbing. That introduction came through none other than the legendary Pat Littlejohn (a pioneering UK adventure climber and prolific new router). Dan was friends with the Pat's children in school but wasn’t aware of their father’s reputation on the rock—probably a good thing, as some of Dan’s earliest climbs were seconding new routes on the famously friable rock of the Lleyn!

“I didn’t know anything about Pat’s reputation when I started, and I don’t think I was ever that fussed as I’d known him a while by then,” says Dan. “I do think that being introduced to climbing in this way has to a large extent fixed the style of climbing I enjoy and how I view the sport. Trad climbing is at the centre of it for me and the best days are daft adventures in the mountains or above the sea.”

Having survived this initiation into the finer points of trad, Dan continued to search out new partners and clock up the miles and experience. Climbing with the likes of Neil Dickson (famed for his bold onsight ethic) and Nick Bullock (another fan of loose and adventurous rock, both in summer and winter) in this formative period cemented Dan’s love for onsight traditional climbing and provided the skills to progress relatively safely through the grades. This process was not entirely without incident, with close calls including decking out on Undertow (E7) at Rieff and a rather harrowing experience on the classic frightener The Bells! The Bells! (E7) at Gogarth:

“On The Bells I made the standard trad mistake of climbing and reversing the crux 20 times, each time to replace the skyhooks that kept falling off. Once I finally embarked on the upper wall my forearms went into meltdown and a split tip was gushing blood. It was fine in the end, but a lot spicier than it should have been. I think Tim Neill was quite alarmed belaying…”

With his background in adventurous trad, it is unsurprising that the lure of freeing big walls proved irresistible to Dan. A personal highlight—and sign of things to come—was a 2008 trip to Greenland, during which he and Es Tressider (long time holder of the Cuillin summer traverse record) made the first ascent—onsight—of Rambling Man, a 1,300m E5, accomplished in a single, epic, 39 hour push. This burgeoning draw toward big walls then led Dan to Yosemite, the home of big wall climbing:

“In recent years I’ve become hooked on visiting Yosemite to climb on El Capitan. It must be the best crag in the world, it’s big, exposed, and the climbing is awesome. So, the first free route I did, which was Golden Gate (5.13a) in 2012, is a really memorable one. It took me and Calum Muskett six and a half long days to do as we were figuring out how to big-wall as we went. We forgot a load of important stuff and with the baking Californian sun it was hard going. But it was also brilliant. Slogging away day after day, gradually moving toward the top, lost in a sea of granite—I was hooked.”

Several trips to Yosemite have followed, with Dan freeing El Cap by various routes, including a highly successful trip in 2014 in which he and the irrepressible James Mchaffie free climbed both the Salathé Wall, (5.13b) and El Nino (5.13c).

Having achieved what many climbers dream of and free climbed a big wall, Dan’s attentions turned to freeing it in a single day.

“I had a chance encounter with the American climber, Madeleine Sorkin,” says Dan, “and she mentioned this was something she was also keen to do. With a storm on the horizon, Madeleine called off her big-wall plans, so had a few days to kill and we decided to go for it. The first (and only) time we’ve tied into the same rope was at around 1am at the base of Freerider, as we set off to simul-climb the first 20 pitches to the Monster Offwidth. This ended up being a devastatingly hard 22 hours on the wall and one of the most amazing days climbing I’ve had.”

Fittingly for a man inspired by El Capitan, Dan lists Tommy Caldwell and Lynn Hill among his heroes and those providing him with inspiration:

“It is partly their dedication to the most amazing cliff I’ve ever seen. But it is also the scale of their achievements, which are immense, and that I find inspiring. Lynn Hill freeing the Nose and all that Tommy has done up there is unrivalled in climbing in my opinion.”

Pat Littlejohn also gets a mention, and it is obvious from Dan’s dedication to ground-up trad climbing that those early forays onto rock have played a huge role in shaping his approach to the sport. In terms of training, trad mixed with some bouldering appears to be the secret to Dan’s success, although he does admit to hanging off a fingerboard occasionally.

With his onsight ethic, background in Welsh and Peak trad and understated nature, Dan embodies the British approach to climbing and has made numerous route additions of his own. In 2016, with Ross McKerchar, Dan established An Inconvenient Tooth (E8 6c) on Am Basteir on the Isle of Skye, and Divided Britain (E7 6c), with James McHaffie, in One Stack Zawn at The Range, on Anglesey.

Dan, who graduated with a B.Sc. in theoretical physics from Edinburgh University in 2009 before working as a risk analyst and then a research associate, has just completed a Ph.D. at the Centre for Health Economics and Medicines Evaluation at Bangor.