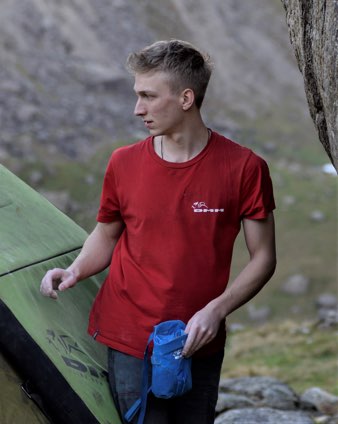 Undeterred by foul weather, always enthusiastic and eager for an adventure, Eadan Cunningham is everything you’d expect of a climber from the Scottish Highlands. Primarily a boulderer, Eadan has ticked hard problems in countries around the world, but it is his drive for new development that makes him stand out as a young climber on the scene.

Climbing and adventure runs in the Cunningham family. The three brothers, Calum, Eadan and Duncan, were introduced to the sport by their parents, learning to trad climb, sport climb and boulder under their encouragement and mentorship.

“Ever since we were able to go outside they took us with them,” says Eadan. “They would go climbing all the time, so we just got carried into crags and strapped to the wall [in baby carriers]. That way we couldn’t run away!”

When the boys were a little older, family holidays were adventurous and always involved climbing. Some of Eadan’s fondest memories of climbing are from these early years with his family, and it was here that he was introduced to developing climbs.

“Some of my earlier achievements would be with the family, going to the Summer Isles off the west coast, near where we live,” says Eadan. “We would canoe out, spend a week on these remote islands and set up trad first ascents every day”.

This first taste of new development was essential to Eadan and his brothers who, growing up in Ullapool in the Scottish Highlands, were forced to be creative with their climbing. With no climbing wall and few other young climbers nearby, the Cunningham brothers spent their after-school hours roaming the surrounding hills, finding, cleaning and developing new boulders to climb and train on. This enthusiasm has continued, with Eadan constantly seeking out new problems no matter where he is.

“The most fun I ever have climbing is finding new stuff, “ says Eadan. “Cleaning it and realising it goes then working it and doing it.”

At 16 Eadan ticked his first “up there” boulder problems, Anatomist and Sassy’s Man, both 7C+ boulders at Torridon in the Highlands. He also made numerous hard first ascents, including the highball Rain Dodger (7A+ or E5 6b) at Ardmair Crag and TPQCD (7B) at Stac Pollaidh.

Upon finishing school in 2018, Eadan bought a small van and set off around Europe for eight months. During this trip he climbed his first 8A boulder, Schlonziges Wiener Schmankerl, in Chironico, Switzerland, along with numerous other classics, like Pamplemouse (7C) in Brione, Switzerland, and Angst im Nacken (7C) in Zillertal, Austria.

Along with his bouldering psyche, Eadan also took his appetite for boulder development abroad with him, establishing new problems as he went, including Post Traumatic Mouse Disorder (7C) in Zillertal and Battle Listener (7B) in the Dolomites.

In January 2018 Eadan spent several months establishing a new bouldering area in Sardinia called Monte Lu Bagnue, building trails and developing over a hundred problems up to 7C+ in difficulty. Eadan considers this his biggest achievement to date.

Later in 2018, after a few months of working to save funds, Eadan headed to southern Madagascar where he developed a number of boulders in the remote Tsaranoro Valley.

“Heading to Madagascar was probably the most amazing trip I've been on yet,” says Eadan. “[I] met some inspiring locals and climbers and was humbled by how the Madagascan people live. I focused mainly on developing highballs while I was there and my personal favourite was a problem I called Ringtail (7A), after the lemurs. It was easy but high and beautiful climbing.”

In the coming years Eadan intends apply his knack for highball bouldering to short, bold trad routes. He also has big plans for boulder development in far-flung places, including Greenland.

Currently, Eadan is enjoying his youth, working to save money for travelling and climbing trips, but he also has a knack with a camera and is considering pursuing filmmaking. You can follow Eadan’s escapades and check out some of his photography via his Instagram.