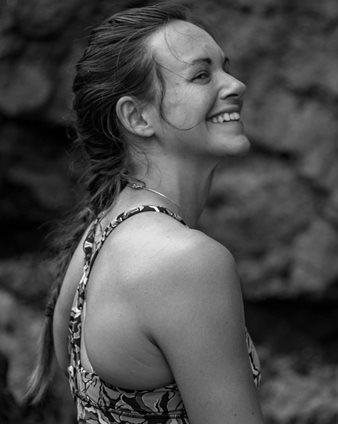 Emma Twyford is one of the reigning queens of British climbing, best known for her trad climbing prowess. Her exceptional CV of onsights and flashes up to E8 and hard E9 headpoints is evidence her comfort on the sharp end and sets an impressive bar for modern day British trad. She has also bouldered 7C+ and, in September 2019, she became the first British woman to break into the ninth grade with her ascent of The Big Bang in North Wales. As well as being a top climber, Emma has a BSc in Sport Science and Coaching, is a successful freelance route setter, runs women’s route setting workshops and bakes a mean meringue roulade.

Emma was born in Exeter in 1986 but grew up in the Lakes and was introduced to climbing by her father at his friends at the age of seven.

“I was very lucky growing up in the Lakes,” says Emma. “My dad and his friend Mike Park started me off and showed me how to lead and place gear well. Having Mike as a mentor was great, as he taught me how to climb safely and competently. Then as I got older I went out climbing with Caff [James McHaffie], which was great as we did lots of cool climbs together and he really pushed my standards whilst being super chilled and psyched.”

Emma started competing indoors at the age of 10 and from the age of 14 competed on the GB Team. As a teenager she was British Junior Bouldering Champion. She continued to toy with competitions until her early twenties, gaining some good international results, including 5th in the 2001 European Youth Championship rounds and 4th in the 2002 Senior International Masters. Despite the success, competitions were not where her heart lay and in 2009 Emma left competitions behind.

Outside on real rock Emma consolidated with a lot of classic E1s, E2s and E3s in the Lakes as a teenager. Her first big step up came at the age of 15 when she climbed Penny (E4 6a) at Holyhead Mountain on a BMC Youth meet. In 2004 she moved to Sheffield to attend university and proceeded to onsight a number of classic Peak E5s, such as London Wall at Millstone. In 2008 she tried her hand at headpointing, making a quick ascent of Monopoly (E7 6b).

Emma was also making progress sport climbing. In the spring of 2010 she redpointed her first 8a, Call of Nature, at Raven Tor, flashed the brutally steep Comedy (7c) at Kilnsey and, in October that year, onsighted Aegialis (7c) in Kalymnos. Two days later on the same trip Emma raised her game significantly with an impressive two-hour-long onsight of Fun de Chichunne (8a), a 40-metre roof on spectacular stalactite tufas.

In early 2011 Emma hung out at Malham in Yorkshire, ticking benchmark test pieces Raindogs (8a) and Zoolook (8a) before skipping a grade and climbing her first 8b, Predator. Later that year Emma pulled off a spectacular flash of the notoriously tricky and sustained Statement of Youth (8a) at Lower Pen Trwyn (LPT) in North Wales.

In the winter of 2012 Emma moved to North Wales and dove head first into the climbing scene, ticking trad test pieces like Positron (E5 6a) at Gogarth and flashing boulder problems, including Going Down on an Elephant (7B+) in Nant Gwynant. On sport routes she began to accumulate a list of eighth grade achievements both at home and abroad, including Over the Moon Direct (8a) at LPT and then SMS (8a+) and Witchcraft (8a) in the Frankenjura.

During the spring of 2013 Emma gained a new bouldering personal best with Powerstrips (7C) at Chironico, while back in North Wales she managed to climb the Llanberis test piece, Bus Stop (7B+) in a single session.

With the arrival of summer she onsighted her first E6, the pushy Pretty Girls Make Graves in the Llanberis Pass. She had also become interested in raising her headpoint standard. With this in mind Emma spent a couple of sessions working the moves on the hard and tenuous Rare Lichen (E9 6c) on Clogwyn y Tarw in the Ogwen Valley. In September Emma smoothly sent the route on the first headpoint attempt, although the slightly damp conditions prompted her to pre-place the crucial micro wires.

After a hard winter of training Emma continued to improve during 2014. Early proof of this came with a flash of Yukan II (E6/7 6b) at Nesscliffe, followed by Emma climbing her first 8b+, Unjustified at Malham, which at the time had a split grade of 8b+/8c. In August a flash of Bucket Dynasty (E7 6b) on Dove Crag in the Lakes also stood out and then in the autumn Emma made the first female ascent of Ron Fawcett’s notorious Strawberries (E7 6b) at Tremadog.

In 2015 Emma started to work increasingly hard to balance climbing with her growing commitments as a freelance route setter, but she still found the time to tackle some routes and boulders close to home, such as a ground-up ascent of Ring My Bell (E7 6b) at Craig Cwm Glas Bach; Impact day (E8 6c) at Pavey Arc in Cumbria; The Lotus (7C) in the Llanberis Pass and Melancholie at LPT, which Emma considers to be her hardest 8b tick to date.

Similar stories unfolded in 2016 and 2017, as Emma balanced climbing with developing her career. In 2016, between stints of work, Emma fitted in an exchange trip to South Africa, during which she claimed two-dozen routes graded 21 to 30, including onsights of Blue Planet Direct and Red Rain (both ~E6 trad routes) in the Western Cape and Jack of all Trades (8a), Snapdragon (7c+) and Eraserhead (7c, onsight) at Waterval Boven. The day after returning from South Africa Emma flashed, thereby making the third ascent of, James McHaffie’s Gravity Wave (E8 6c) at Trearddur Bay. Likewise, during the 2017 autumn season Emma made quick work of a number of routes at Nesscliff, including Une Jeune Fille Quatre Vingt Dix Ans (E8 6c), My Piano (E8 6c), 10 O’Clock on a Saturday Morning (E7 6c) and the fourth ascent of Cassini (E8 6c).  She also nailed her first 7C+ boulder, Corridors of Power in North Wales.

In 2018 Emma had possibly her best year to date, full of big trad ticks and hard sport climbing. The year kicked off with Emma reaching a new high in her sport climbing with a send of the 50m endurance route Mind Control (8c) in Oliana, Spain, in February.

“It was funny with Mind Control because I expected it to be harder than it was,” says Emma. “That’s not to sound arrogant! It’s just that Unjustified took me so much time and so much effort. Mind Control should have been the hardest thing I’ve ever done but it didn't take that long to come together and when it did it all felt very natural.”

Then, in May, Emma began an impressive trad season, during which she made a fast ascent of Once Upon a Time in the Southwest (E9 6c) at Dyer's Lookout in Devon, ticked Steve Mayer’s infamous Nightmayer (E8 6c) on Dinas Cromelch in July, and then sent the Big Issue (E9 6c) and Point Blank (E8 6c) in Pembroke in August.

“This year I’ve been way more relaxed,” says Emma when asked about her successes in 2018. “I’ve not been putting pressure on myself. Being relaxed about it makes me perform better. It means I perform when I want to!”

Throughout 2018, while ticking off these high-end trad routes, Emma was also putting in considerable time—and making excellent progress—on North Wales’ hardest sport route: Neil Carson’s The Big Bang (9a) at LPT. In September 2019 she finally succeeded, becoming the third person ever to climb the route and the first British woman to climb 9a.

""At the top, I thought to myself did that actually just happen?" says Emma. "I wasn't pumped and it had felt like a path. There was also a fair bit of swearing with the relief of finally getting it done!"

Since 2012 Emma has worked to develop a career as a professional route setter and now works full-time in the route-setting industry. In 2018 she and fellow setter Evie Cotrulia, started Creative Climbing, offering workshops for women interested in route setting to help bridge the gender gap in climbing and the setting industry.

“For both of us, especially Evie, who manages the setting of three climbing walls, when we were on sets we kept getting asked how we got into route setting by women at the wall,” says Emma. “Both of us wanted to set up workshops that were a little more approachable and empathetic to women.”

“It’s seen a really positive reaction. Everyone who’s been on the workshops has really enjoyed them.”

When she’s not on the road working or climbing Emma enjoys life at home making decadent gluten-free desserts (“It’s quite therapeutic!”). She is a valued member of the North Wales community, often to be found not taking herself too seriously while enjoying cake and coffee in Llanberis. Given the physically demanding nature of her job she likes nothing more than relaxing with a glass of wine and a good book on her days off: “I like wine and I like gin,” says Emma. “I particularly like gin!”