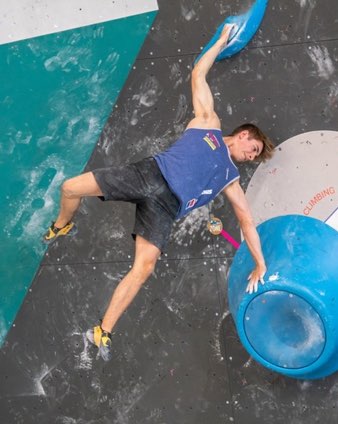 Kieran, who is based in Bangor, North Wales, decided to become a rock climber when he was eight years old: “I went to watch the 2008 Welsh Championships at the old Beacon in Waunfawr,” says Kieran, “and I knew that I wanted to be a part of it”

Straight away he started climbing more with his parents and joined the local academy. He was accepted onto the Welsh Squad in his first year of competing, but his mind was always on the GB Team. In 2014, Kieran made the GB Lead Team and since then has competed in 22 international competitions, with impressive results in both Lead and Boulder, including 14th in the 2017 Youth World Bouldering Championships and 8th in the 2018 Youth European Lead Cup. In 2018 Kieran was able to compete in adult competition categories and placed 5th in the British Lead Championships and an impressive 46th in his first Lead World Cup. Kieran was also the British Lead Champion for his age group three years running, from 2015 to 2017.

Unsurprisingly, Kieran is also no stranger to hard sport climbing outdoors and has climbed numerous sport routes in the eighth grade. He flashed his first 8a, Fun de Chichunne in Kalymnos, when he was only 15 years old and the following year clinched his first 8b+ sport route, El Espiritu de los Tiempos in Chulilla—which he climbed second go.  Most recently Kieran ticked Lucky Luca Extension (8c) in Kalymnos.

With unrivalled passion and determination for training Kieran is one to watch as he gains experience on the adult competition scene.