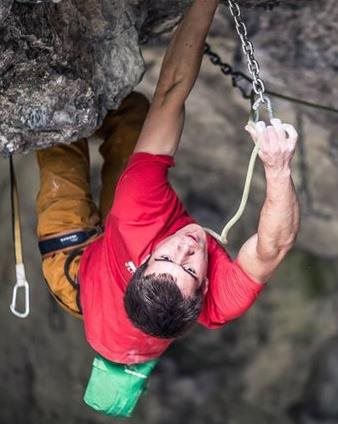 Maciek is a talented young Polish climber who has hit exceptional form in recent years. His passion for climbing runs deep and is matched by a strong desire to keep on improving. He has already redpointed 8c and onsighted 7c+. He has also excelled on the Polish competition scene.

Maciek was born in Warsaw in 1994 and started climbing when he was 12 years old.

“My father took me to the Polish rock area, Jura," says Maciek. "There I met some interesting people and got to like climbing very much. From the very beginning I treated climbing as my biggest passion.”

There are no crags within easy striking distance of Warsaw, so Maciek became a regular visitor to the indoor climbing walls.

Aside from his dad, Maciek was helped by a number of older climbers, inlcuding Małgorzata Kusztelak and later Jakub Ziółkowski.

In his first season Maciek started slowly and was only top roping up to 6a. He soon stepped up a gear though and took on more challenging routes.

“From the second season I started gradually improving my achievements in the Polish Jura," recalls Maciek. "I remember that I got really happy when I sent Polak Musi—my first 7a+—in 2009. After a year I sent Porozmawiajmy o Kobietach—my first 7c—which earlier had looked for me impossible to climb. Then in 2011 I did Aleja Zasłużonych, 8a+.“

In 2012, at the age of 18, Maciek found himself drawn to the world famous sport climbing cliffs of Spain:

“I flew to Rodellar and spent about one month in this beautiful village. The place was a little bit magic for me. I hadn’t seen any rock so huge and overhanging until this moment. The routes were very long and my endurance left a lot to be desired, but after a month of climbing I did a little progress and managed to do Philippe Cuisinere 8b/+.”

Another highlight of the year was Władca Pierścieni at Okiennik Wielki in Poland, his first 7c+ flash. He also redpointed two 8a+s and seven 8as.

In the summer of 2013 Maciek spent a week at Céüse in France, gaining valuable fitness, as much from the routes as the legendary walk in. It proved to be the perfect preparation for what was to come:

“Then I came to Rodellar, I finished some easy projects from the previous year and after getting better endurance I focused on something harder. With Szymon Łodziński (my climbing partner) we chose the route Florida, a 20-metre and 45-degree burly 8a/b leading to a rest and nice boulder problem on small tufas, crimps and slopers increasing difficulty to 8c. Szymon did this route first and after some time I managed to do it as well.”

Also while at Rodellar Maciek ticked Botanics (8b+) and Ixeia (8b+), plus several 8a+ and 8a routes. He also onsighted a brace of 7c+ lines, including Les Vielles Glories. During a brief visit to the DMM factory in North Wales he sampled some slate routes in Dinorwig Quarry and did Jerry’s Roof (7C) and Bus Stop (7B+) in the Llanberis Pass.

Maciek has always placed well in the Polish climbing competitions, with numerous top five positions over the years. In 2013 he even gained two first places in his age category for the Polish Cup.

Early in 2014 Maciek climbed his first 7C+ boulder problem: Keep Fit at Kamień Michniowski. In May a trip to the Slovenian crag, Osp, gave some satisfying ascents; the best of which came on the last day when he redpointed Missing Link (8b+). Returning home he managed to climb Robot Obibok at Jastrzebnik, his first Polish 8b.

In 2015 Maciek climbed Geminis (8b+/c) in Rodellar and then took a little break from sport climbing. The rest was obviously beneficial, however, as the next year he climbed his second-hardest route in Poland, Czekając na Godoffa (VI.6 /8a+), in the Mamutowa Cave.

After this Maciek shifted his attention to bouldering and started regularly visiting Fontainebleau. In 2018 he ticked his first 8A boulder there, the sloper-heavy L’apparemment.

Also, in 2018 and 2019 Maciek focused on mountain activities, climbing some trad routes in the Polish Tatra mountains:

"They were easy compared to my sport climbing achievements," says Maciek, "but that's something I want to improve more in the future, as I was terrified while climbing them anyway!"

In 2019 Maciek returned to sport climbing and ticked a few classics during a two-week trip to Rodellar, inlcuding Gladiator (8b) and El Chorreras o la Belle Inconue (8b/b+), along with five other routes graded 8a or 8a+.

Since 2016, after completing a degree in electronics, Maciek works as a software engineer for a small Polish IT company. When he's not climbing he enjoys cycling, swimming and running, and in 2019 came 5th in the open category on the Babia Góra mountain running race.

[Check out this film of Maciek onsighting Peixa (7c+) at Siurana at the end of 2013 and this film of him climbing Skrzydełko VI.5+/6 on Popielarce in the Polish Jura.]