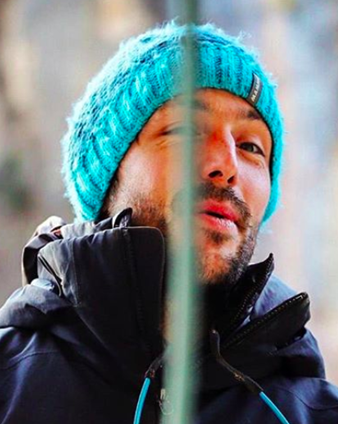 Ryan Pasquill is about as low-key as they come. Not one for social media or self-promotion, he quietly goes about his business, climbing sport routes up to 9a, boulders up to 8B and trad up to E9, including ground-up and onsight ascents of routes up to E8. He is without doubt one of the UK’s top all-round climbers.

Ryan was introduced to climbing by his dad, Lancashire climbing legend Hank Pasquill.

“Apparently I didn’t take to climbing when I was younger,” says Ryan, “so my dad took me and a mate wrestling (Olympic style). We competed for a few years but gave up when we could no longer bring ourselves to wear a leotard! (age 11).”

Ryan came round to the idea of climbing in 1997, aged 13, while on a wet weekend break to North Wales.

“It was my dad’s old climbing partner Ray Evans’ 50th. They tried to climb Cenotaph Corner in the rain but failed, so we all ended up at the Beacon climbing wall. That’s the day me and my sister started and when dad started again after a 10 year lay off. It wasn’t long before my wrestling mate joined us on our weekly visits to the local climbing walls.”

“It was my dad’s problem at the local bouldering quarry of Brownstones,” says Ryan. “Hanks Wall, given V7 or font 7A+ in modern grades.”

By 16 he was onsighting E6s, including Desperate Dan (E6 6c, then E7) at Ilkley (“Without pads or spotters for the full tick.”) and headpointed the third accent of Nick Dixon’s Beginners Mind (E7 6c, E8 at the time) and the second accent of Gaz Parry’s S-Groove (E7/E8 6c).

In early 2000 Ryan was plagued by injuries: torn cartilage in both knees and repetitive strain injuries in both hands. This didn’t seem to hold him back though and he still headpointed numerous E7s and onsighted up to E6 on the gritstone. He was also venturing out soloing, but found his knee injuries to be more problematic in this realm and had to be rescued numerous times when his knees locked up “at the most inappropriate times.”

Eventually, Ryan had to undergo surgery on his knees and in 2001 took six months off to recover. Nevertheless, he promptly returned to E7 form once his knees allowed.

2002 was a year of eights for Ryan: he climbed his first 8A boulder, The Joker, at Stanage, in only five attempts; climbed his first 8a sport route, Raindogs, at Malham, and flashed his first E8, Count Down to Disaster, at Ilkley. In addition to this, he upped his sport onsight grade to 7c+ and climbed the 100m Traverse of the Gods, at Longridge, which is given a sport grade of 8b+.  Sprinkle in a few E7 ascents for good measure and we can all agree that 2002 wasn’t too shabby for the 18 year old.

The following year Ryan had a “good day on the grit” with his friend Pete Hurley, climbing Benign Lives (E6 6c) after a quick top rope, flashing Bud (E7 6c), onsighting Moon Madness (E7 6c) and flashing Narcissis (E6 6b). He also flashed his first 8a sport route and climbed his first 8b+ that year, both on the tough, pocketed limestone of the Frankenjura. Later that year, a trip to Yosemite ended when Ryan fell off the famous Yosemite V8 boulder problem Midnight Lightning, falling nearly 20ft and fracturing his vertebrae.

Following his fall, Ryan struggled with back issues through 2004 and upon setting off on a three-month bouldering trip to the US hadn’t climbed in two months. Nevertheless, towards the end of the trip he pulled off his first 8B boulder, the Dave Graham test piece Spectre in Bishop, California.

In the following couple of years Ryan focussed on work, partying and the occasional boulder competition, but still managed some impressive outdoor highlights, including flashing The End of The Affair (E8 6c) at Cubar in 2006, an 8a onsight in 2007, and in 2008 his first 8c, Bah Bah Black Sheep at Céüse, and his second 8B boulder, The Ace, at Stanage.

In 2009 Ryan hit some more milestones, making the first accent of Gerty Berwick (E9 7a) at Ilkley and climbing his first 8c+ with Evolution at Raven Tor. He also flashed the immensely tricky and technical The Medium (8a) and Windows of Perception (E6 7a) in the Llanberis slate quarries.

Slowly, over the next couple of years Ryan continued to amass hard routes, including lots of flash, onsight or ground-up ascents of gritstone E7s and E8s, including the first ever flash of Knocking on Heaven’s Door and Slab and Crack at Curbar, and Return of the Jedi (HXS 7a, ground-up highball style) at Matlock Quarries. He also ticked Cypher (8B), the Ben Moon classic at Slipstones in Yorkshire, and made a quick redpoint ascent of the powerful Jungle Speed (8c+/9a) in Siurana, in just three sessions.

A drunken incident involving a bicycle and a brick wall resulted in two broken ribs for Ryan in 2015 and required two months of rest. Never one to be held back by injury, Ryan jumped back on the wagon by climbing Divided Years (E8 6c) at Buzzard’s Roost in the Mourne Mountains, in ground-up style with James McHaffie. This was the first ground-up ascent of the famous John Dunne route.

"My hands were uncurling off the flat ledge at the end of the hard climbing,” says Ryan. “I knew I didn't have it in me to climb that section again so really had to fight to stay-on. It was great fun though."

A DMM trip the following year saw Caff and Ryan team up again to make another impressive ascent of a John Dunne line: The Great Escape (E8 6b, 6c, 6b) on The Bastion on the Isle of Arran. The middle pitch of this route climbs the striking sheet of granite situated below the summit of Cioch na h-Oighe (661m). Ryan flashed the crux pitch after belaying Caff on it. After months of clipping bolts while trying Rainshadow (9a) at Malham, Ryan found his calves getting pumped were more of an issue than his arms getting tired.

Caff and Ryan clearly made a motivated team and a visit to Pembroke in 2017 confirmed this, with both making ground-up ascents of the steep and relentlessly technical Big Issue (E9 6c) at Bosherton Head (yet another outstanding route by John Dunne!).

In May 2018 Ryan’s prolonged battle with Rainshadow came to an end after more than 50 days at the crag. His second 9a came much faster when, less than six months later, Ryan climbed Speed Integral, at Voralpsee in Switzerland in just seven days. He upped his game in April the following year by climbing another 9a, the historic Bain du Sang in Saint-Loup, Switzerland, in only six days.

Ryan, who lives in Sheffield, has worked in roped access and the trades, but now builds climbing walls.