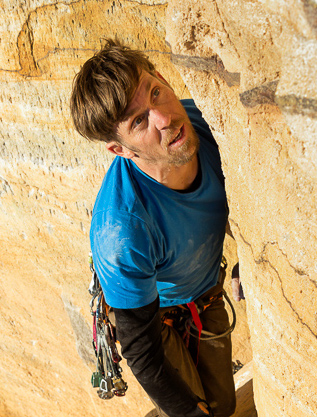 Zac is one of Australia’s best climbers, with numerous first ascents and first free ascents to his name, including 8c sport climbs, 8b trad lines and Australia’s hardest multi-pitch climb, BAM! (31/8b), in Bungonia Gorge.

Zac was introduced to climbing at his local climbing gym when he was 16 years old and immediately started going regularly with friends from school. After six months of climbing indoors he and his friends starting catching the train every weekend up to the Blue Mountains, roughly an hour from their homes in Sydney, and that’s where Zac’s climbing really took off. After only a year of climbing Zac ticked Bernie Loves Sausages (26/7b+) and Wrong Movements (27/7c) at Centennial Glenn in the Blue Mountains, and it wasn’t long after this that Zac was onsighting harder grades, including a number of tough routes in the Grampians like Monkey Puzzle (28/7c+).

Back at home Zac was training hard with his dedicated group of friends.

“We all pushed each other along with good psych levels,” says Zac. “We all progressed fast, with someone sending something noteworthy most weekends. It was a great scene producing some of the best and strongest climbers in Australia still to this day.”

It wasn’t long before Zac headed off to Europe, hitting up world-class venues like Fontainebleau, Annot, Gorge du Tarn, Buoux and Céüse. After climbing up to 8b in Céüse Zac made a pit stop in the Frankenjura before heading to Seattle in the U.S. where he lived with his dad and worked in a climbing gym to recoup funds.

Back in Australia Zac has made numerous first free ascents of old aid lines in the Blue Mountains, many of which remain unrepeated, including Gigantor on the infamously chossy Dog Face. Zac claims that this line was the inspiration for his love of adventure-trad climbing old aid routes, of which Culdasac (31/8b) is another.

In 2012 Zac proved his skills were transferable to the big walls when he made a free ascent of Freerider (5.13a) on El Cap in Yosemite, falling only once on the entire route during an easy section of Freeblast. He also team freed Golden Gate (5.13c) with Tobias Wolf over five days.

In 2017 Zac attached crampons for the first time and climbed Supercanaleta on Mount Fitz Roy, Patagonia, during a 20-hour tent-to-tent push, further proving his ability as an all-round climber.

Zac works in rope access and currently does tree work close to his home in the Blue Mountains. Outside of climbing he enjoys trail running, mountain biking and snowboarding, and loves being out in nature.