Denmark isn't known for its crags or high mountains. In fact, calling it flat would be a fair description, since its highest point — Møllehøj — is only 171 metres above sea level.

So it may come as a surprise that its easternmost territory, Bornholm Island, makes a great holiday climbing destination. Situated in the Baltic Sea, the small island with 145 kms of coastline is actually closer to Sweden than Denmark.

At the start of June last year DMM loaded up the van with climbing gear and a small exhibition stand, to visit Bornholm for an informal get-together with a few of its European distributors and climbers.

The island has a wide variety of easily accessible single pitch climbs. Near Lindesal (Hammeren) you'll also find a small amount of bouldering in a beautiful setting. The granite quarry of Moseløkken offers well developed sport routes up to 35 metres in length but the rocky northern coast has a trad climbing ethic. Last year Geoquest published a new guidebook to the island, Bornholm on the Rocks, available direct or from Cordee in the UK. 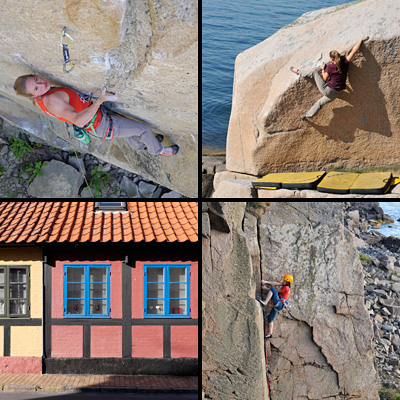 Dotted with smokeries (mostly for herring), windmills and old half-timbered houses the island oozes an idyllic charm. In 2013, Svaneke was voted the most beautiful town in Denmark. Like all of Denmark, cycling is a popular way of getting around the island.

In our few days climbing on the island, Alexandra Schweikart and Chris Igel particulary enjoyed the ambience of the crags at Randkløve, freeing old A2 routes such as Den Bornholmske Anarkist and Eventyret, der endte Bradt, at E5 and E3 respectively.

It's worth noting that some of the sea-cliffs at Hammeren, such as where the classic Flyende Salewa is found, can be very 'birdy' in the spring and should not be disturbed. Moseløkken quarry is unusual as a climbing venue in that quarrying still takes place here, so climbing is only allowed at weekends, public holidays and with permission in the evenings.

To get to Bornholm it's necessary to take a ferry to Ronne, either from Ystad in Sweden (1hr 20mins) or Sassnitz in Germany. This year's Bornholm Climbing Festival, organised by the Danish Climbing Federation, will be based at Moseløkken Stenbrud from the 6th-9th August.