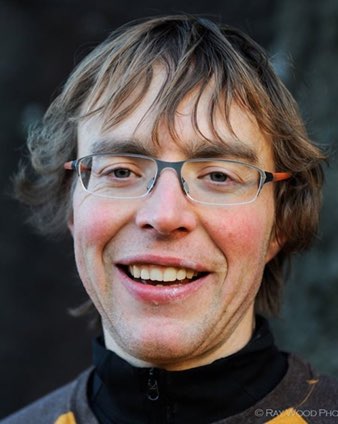 Ben is widely recognised as one of the best climbers operating in the UK. He has an impressive record of ascents spread across a range of different disciplines—what follows here are merely some of the highlights of his remarkable climbing life.

He was born within one mile of Almscliff, the famous Yorkshire grit crag, and was introduced to climbing by his parents, who are also keen climbers. By the time he was 11 he had lead his first extreme, Short Circuit (E2 5c) at Ilkley. Ben also rose quickly through the youth competition climbing ranks; in fact he was the first ever junior champion in 1992.

A move to Cirencester gave him access to the vibrant Bristol climbing scene and a host of new experiences on the sea cliffs of Pembroke and Devon, plus a range of serious trad routes at Avon. He was also traveling a lot and onsighted his first E5, Right Wall on Dinas Cromlech, in 1994. Ben's confidence continued to grow and by 1996, at the age of 17, he onsighted E7. A couple of years later he headpointed the exceptionally bold Chupacabra E8 in Huntsman Leap in Pembroke.

A degree course in mechanical engineering brought him north to a communal climbers' house in Leeds, which he shared with other talented young climbers. such as Patch Hammond, Adam Long and Ben Tetler. He was soon onsighting grit E7s, like Messiah at Burbage, and managed to boulder 8B.

In 2000 he flashed Carmen Picasso (E8 6c) at Gorple; even though there was a pre-placed wire this was recognised as the first ever E8 flash. In 2002 he freed The Nose on the Sgurr of Eigg (E8 6c) with James McHaffie.

Despite his love of the British crags Ben's sights were set on bigger challenges; following on from the first ascent of The Thumbnail, a 1400m E6 in Greenland he made ascents of Salathé Wall and The Nose (in only 11 hours!) on El Cap in Yosemite and then a one-day free ascent of Freerider, a 31 pitch 5.12d, also on El Cap.

His first expedition to Patagonia led to an ascent of the Whillans-Cochrane on Poincenot, not to mention a hefty portion of extreme Patagonian weather. The following year produced a bounty of routes in the region, all climbed onsight, and culminating in the first integral free ascent of The Slovac Route, a 1600m 5.11 on Fitz Roy, and the first ascent of El Facon, a 900m 5.12 A1 on Desmochada.

In 2004 Ben married Kath and two years later a baby girl, May, arrived. Family life curtailed overseas expeditions to an extent but Ben still managed the first free ascent of The Finger of Fate (5.12+) on The Titan in Moab with Pete Robins, and during a quick jaunt to Australia he onsighted Serpentine 8a on Taipan Wall. He also onsighted Slimline 8a+ just right of Action Directe in the Frankenjura.

Back home he pushed his sport climbing standard with a redpoint of Make it Funky F8c at Raven Tor and did lots of ground up/highball ascents on the grit such as Careless Torque 8A at Stanage, Superbloc 8A+ at Gardoms Edge and Lanny Bassham, an impressive 8A+ first ascent at Rylstone.

The notable ascents kept on coming; in 2008 he one again joined forces with Pete Robins to make an adventurous ground-up first ascent of Monkey Journey to the West (E7 6c) on Range West in Pembroke. The following year he joined James McHaffie for a repeat of the legendary Voie Petit (8b) on the Grand Capuccin.

During 2012 Ben became afflicted with Labrynthitis, a vertigo inducing condition which seriously curtailed his climbing activity. Come spring 2013 he was still suffering some of the symptoms but managed to make the second ascent of Superstition E8 7a at Burbage above a snow platform. In May Ben showed more signs of recovery, partnering with James McHaffie on the second ascent of Longhope Direct, Dave MacLeod’s multi pitch E9 7a on Hoy in Scotland. Check out Ben’s amusing film of the ascent.

Ben then felt the draw of North Wales limestone once again—over the summer and early autumn of 2013 he picked off three prize first ascents. First to go was Follow your Heart  (8a+) in Pigeon’s Cave; he then shifted his attention to the legendary Diamond crag on the Little Orme. Here Ben lined up for a rematch on a project that he had first bolted with Sam Whittaker in 2011: The Beast 8c went down surprisingly quickly. Last of the trio was Beauty 8b+, another steep and difficult route on the Diamond.

In November he became the first person to re-climb Parthian Shot at Burbage South following the breakage of the ‘shipwreck’ flake—in its new form it rated a whopping E9/10 7a. Four months later, in March 2014, he struck again on the grit, making the second ascent of Pete Whittaker's Baron Greenback E9 6c at Wimberry Rocks.

Ben currently lives in Hathersage in the Peak with his wife and daughter. He remains a keen rock climber but is often tempted to mix things up with a bit of skiing or winter climbing—he even managed to pick off a few good winter first ascents in North Wales in 2010.

“When my daughter May started school I had more time to climb so I tried to get fit again, and the best way seemed to be to do more sport climbing," says Ben. "I managed a few quick 8b+s. I had done one 8c a few years before—Make it Funky at Raven Tor. I worked it on my own using a gri gri during May’s nap time - I would get her to sleep in the van at the bottom and then work the route with the baby monitor on my harness so I would know if she woke up. She normally slept for about 1.5 hours and I would be back down before she woke up (normally). I managed to lead the route second go, the first day I actually had someone to belay me!”