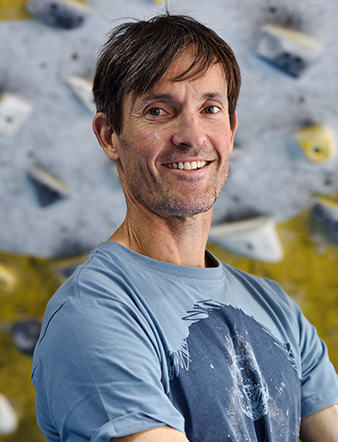 The name Ben Moon is synonymous with the coming-of-age of sport climbing and hard bouldering in the UK. A driving force in the 1980s and 1990s climbing scene, Ben was among the first climbers to instigate modern redpoint tactics on climbs and helped revolutionise the sport. Throughout his climbing career, spanning more than four decades, he has climbed 9a, bouldered up to V14 and run a successful climbing company. He established new benchmarks for the hardest climbs in the world and is best known for the first ascent of Hubble at Raven Tor, which upon its establishment was the first 8c+. With a font 8B boulder crux, the eight-metre, rarely repeated route is now regarded to be 9a.

In recent years Ben has shown agin and again that age is no limit to hard climbing with a slew of hard ascents, including establishing an 8B+ boulder aged 40 and sport climbing 9a just shy of his 49th birthday.

Ben grew up in the south of England and first went climbing when he was seven years old while on a walking holiday in the Lake District. At 16 he left school, moved to Sheffield and signed on the dole in order to pursue climbing full time. In the following decade he helped change the face of British climbing.

Initially, Ben was part of the blossoming UK trad climbing scene and climbed up to E7. However, a trip to France—the place to be for hard sport climbing at the time—with climbing partner Jerry Moffat in the early 1980s prompted the duo to adopt French climbing tactics on UK crags, slowly pushing the grades by repeatedly attempting routes in a yo-yo style until success was achieved. These tactics progressed to full redpoint strategies by the mid- to late-1980s, which resulted in a rocketing standard of sport climbing in the country.

After several seasons Ben had repeated many of the hardest climbs in Buoux—and the world—including Antoine Le Menestrel’s La Rage de Vivre and Marc Le Menestrel’s Le Minimum, both 8b+. He then turned his attention to establishing his own routes.

In 1984, as a wiry 18 year-old with shoulder-length dreadlocks, Ben made his name in the climbing scene by establishing the UK’s benchmark 8a test piece Statement of Youth at Lower Pen Trwyn in North Wales. This was one of the first fully bolted sport climbs in the country—in an era of stout trad climbing and ethics—and only the second 8a.

Ben went on to establish other cutting-edge routes, including Agincourt (8c) at Buoux, France in 1989, which was potentially the hardest route in the world at the time, Hubble in 1990 and Sea of Tranquility (8c+) at Lower Pen Trwyn in 1993.

Ben applied the same tenacity to bouldering as he did to routes and helped enrich and develop bouldering as a sport in its own right, not merely as training for routes. Bouldering films like The Real Thing and One Summer featured Ben and other UK climbing stars, like Jerry Moffatt and Ben Pritchard, and showcased bouldering in a new light.

Ben went on to contribute a number of hard boulders to the climbing world, including Black Lung (8B) in Joe’s Valley, Utah, 8 Ball (8A+) at Gardoms Edge and Cypher (8B) at Slipstones.

In January 2005 Ben made the third ascent of The Ace (8B), Moffatt's sit start version of The Joker at Stanage and in November he went on to make the first ascent of Voyager (stand) (8B) at Burbage West.

A year later, in November 2006, 40-year-old Ben successfully completed the sit start variant of Voyager. This route was Ben’s hardest to date—and is widely regarded as the hardest problem on gritstone—and he subsequently wrote on his blog: "It's been really hard for me and is certainly the hardest bit of climbing I have done. I am pretty sure it's 8B+."

Later that same month, during a trip to the US, Moon flashed Diaphanous Sea (V12) at Hueco Tanks. However, upon returning to the UK Ben packed in climbing, finding that he was feeling demotivated and wanted to focus on his family and business.

It would be nearly a decade before Ben’s motivation returned, but return it did.

Ben claims that his inspiration was renewed when he saw someone climbing Rainshadow (9a), the continuation of Raindogs, at Malham. He went on to send the route in June 2015, age 49.

In November 2018, at 52 years old, Ben made a rare repeat of Jerry Moffatt’s 1995 route Evolution (8c+) after trying the route on and off for over two decades. He had climbed Hajj (8c) three weeks prior. He then returned his attention and efforts to Northern Lights at Kilnsey, to which he has now devoted over 100 days since the mid 1990s.

As well as his undeniable impact on sport climbing and bouldering, Ben has also had a profound influence on training for climbing and has built a successful business, Moon Climbing, selling climbing clothing and training equipment, most notably the globally famous MoonBoard.

In 1993, Ben and a number of other resident Sheffield climbers, including Jerry, Malcolm Smith and Stuart Cameron and led by Gavin Ellis, rented a small 30-foot by 30-foot space in the Anns Grove School and created a training facility of angled boards and campus rungs using scavenged wood offcuts for holds. 'The School Room', as it was known, became the premier training venue for the top climbers at the time and was home to some of the hardest problems in the world, including Perky Pinky and Milk It, both rated 8B.

In 2005, Ellis suggested to Ben that he create a standardised training board, and the MoonBoard, a simple 40-degree wall with set holds, was the result. The number of MoonBoards now in use around the world number in the thousands and come with a mobile training app and way for climbers to share their devised problems on this universal training system.