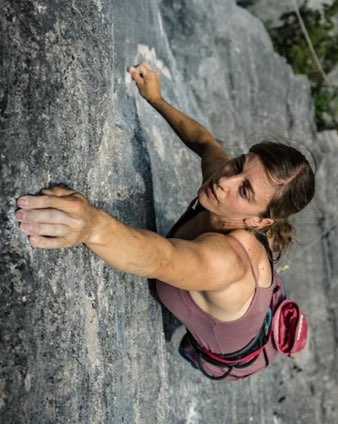 Tabea is a bright star in the Swiss climbing scene, effervescently keen and always hungry for more climbing. Her enthusiasm is infectious—just ask anybody who has spent time in her company.

She was born in 1983 and grew up in the countryside surrounding Zürich. Her first experience of climbing came in 1994 when, aged 11, her uncle took her scrambling in the Mettmenalp area. Yearly holiday trips into the mountains followed, but Tabea’s real connection to climbing was forged through regular visits to climbing gyms throughout her teen years.

As time went on the desire to get involved at a deeper level grew stronger. In 2002, when Tabea finished college, she decided to “go climbing for real”, as she puts it. A five-month stint at El Chorro in southern Spain seemed just the ticket. This intensive period saw her fully immersed in the world of climbing. While her focus was on onsighting harder routes every day (6c to 7a), a friend introduced her to the idea of working the moves on seemingly ‘impossible’ routes, like 8as. This eye-opening experience left her gripped by the vision of climbing hard routes like these one day.

The following year Tabea went on a two -month trip to Boulder in Colarado with friends she had met in El Chorro and managed to push her standard up to onsighting 7b. Back in Switzerland she organized her life around trips to the different crags close by, working in the gyms on ‘rest days’, setting routes and giving climbing courses.

In the summer of 2004 Tabea moved to Zürich to start studiying Psychology and throughout this, and over the following years, she climbed a lot of multi-pitch routes in the ‘Wendenstöcke’.

In spring 2007 she tried out some Deep Water Soloing in Mallorca and was immediately hooked on this exciting climbing style. After being talked up to a certain height above the water, it seemed only reasonable to go and flash one of her first 7cs, rather than to let go and fall into the deep! The mantra: ‘Just think of the climbing’ gained a new meaning that day. Later the same year she redpointed her first 8a: No Time… at Engelberg. Tabea was also starting to become more structured in her approach to climbing; in 2008 she trained properly and managed her first 8a+, Onan der Masturbator (also at Engelberg).

Unfortunately in that same summer Tabea fell sick with an extended bout of glandular fever which stretched on and on. Despite not being at full health, she joined the national team in 2009 and did a few World Cup competitions. The mental game of competitions helped to enrich her climbing life with yet another challenge. She focussed on bouldering competitions and training strength to avoid the endurance training that would make her sick again. By 2010 Tabea was recovering well and in August even managed to climb Encore (8a+) at Ceuse. This was the first sign that she had beaten the glandular fever.

Throughout 2011 Tabea’s health steadily improved—her best competition result was 20th place in Eindhoven—and come 2012 she was hitting strong form, both in bouldering competitions (placing 29th and 23rd in the World cup series) and out on the crag. In June she flashed Steal of Stone (8a) at Fräki (“One of the biggest fights in my climbing life!”), and followed it in July with a redpoint of Onanlater (8b) at Engelberg. Tabea also stretched herself in a slightly different arena with the first female ascent of Land ohne Herren, a very exposed nine-pitch 7c on the north face of Titlis in Engelberg.

In the first couple of months in 2013 she stayed with her boyfriend in a little apartment in Chironico and immersed herself in the world of bouldering; working constantly on harder boulder problems she discovered “how much more than expected is possible”. In April Tabea climbed two 8As at Chironico: Souvenir andThe Arête with the Pocket. In May she came over to North Wales, with the rest of the Euro team, and enjoyed sampling the many and varied delights of the area (rediscovering trad climbing). On the very last day of her trip, and in the last few minutes of available time, she nailed the Cromlech bouldering test piece, Bus Stop (7B+).

In 2015 Tabea upped her sport climbing grade with an ascent of Sony Boy (8b+) at the Belly. She also took to some bigger walls, with a redpoint ascent of Deep Blue Sea (7b+, nine pitches) on the Eiger, and then the next day Magic Mushroom, a 20-pitch 7c+ route also on the Eiger. Tabea flashed or onsighted all the pitches except the crux 7c+ and the last 7b+, which she unfortunately didn’t have time to redpoint. Two years later, in 2017, Tabea made the first ascent of Schweinchen im All (8a), a limestone slab in Engelberg bolted 20 years prior. “Four meters of blank rock looked impossible,” says Tabea, “but then there was a way!”

After her 2015 success on Sonyboy Tabea needed a new challenge in her favourite climbing area (the Belly) and found it in a 40-metre 8c called Microbeta. On many days in 2017 Tabea went to work the route on toprope and was getting closer. However, pregnancy put hard climbing on hold and in March 2019 Tabea and Barti celebrated the arrival of their little boy. Microbeta has not been forgotten, however, and is Tabea’s main climbing goal for the coming year.

“Across my climbing life to date, what I love the most, far more than the end result or a number attached to the experience, is the process of doing it," says Tabea. "For me, climbing is a riddle that I love to solve. I love working on the moves and uncovering the individual solutions that exist for each problem and each hold on the problem. Engaging in that mystery of climbing is what I love to do most. My favourite routes ever are the ones I haven't done yet, the ones I can dream about, work on and make possible.”

Tabea, who has a degree in psychology, worked for a decade as Head Bouldering Coach at a climbing wall in Zürich and also worked occasionally as a climbing instructor outdoors. In 2019 she started work as an outdoor climbing instructor in the area Lucerne- Engelberg. Tabea hopes this will allow her to work less, be closer to home and be free to go on long climbing and surf trips with her little family.