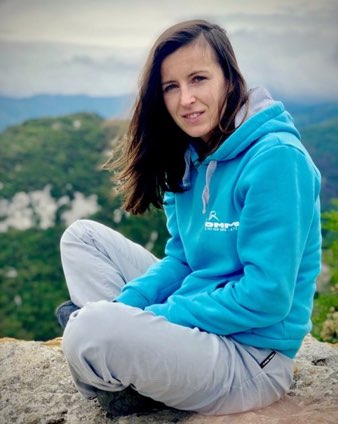 Agata is one of the best female climbers in Poland. She has redpointed 8c, onsighted 8a and has an impressive track record in both lead and bouldering competitions. Regardless of these outstanding achievements, the most striking thing about her is the deep and enduring passion she holds for climbing.

She was born in 1985 in Torun, a beautiful medieval city in the flatlands of northern Poland. Despite the lack of local crags Agata was soon introduced to the outdoor life by her family.

“My parents have always loved mountains," says Agata. "Even though we are from a totally flat area, which is much closer to the sea than to any mountain or climbing area, ever since I was a few years old we have spent every summer and winter holidays in the mountains, trekking or skiing.”

Still, it was not until the age of fifteen that Agata actually saw anybody climbing. The sight of a couple of climbers on a wall in the Tatras Mountains fascinated her so much that she started asking questions. Returning from the holiday she signed up with the Alpine Climbing Club in Torun, and before long a new obsession had taken hold.

“It was the first sport route that I redpointed," says Agata. "It took me more than 10 tries. It was my first climbing season and it showed me how determined I can be in reaching my goals in climbing—and this happened in a good way, without any bad emotions. It showed me how well I can deal with failures. By trying this route I really discovered a big part of myself and my attitude towards climbing. I got to know what it means for me, what I like in it, what not so much, and this attitude has stayed with me till now.”

At the age of 17 Agata spent five months living in France with a French family. She had hoped to be placed in one of the classic climbing areas but ended up in Nantes, close to the Atlantic coast. The only possible climbing was at the gym, but it was still a great experience and one that left her with a strong bond with France. To this day she still meets up with the host family and has climbed with them in Chamonix and Gorge du Tarn.

Competitions have always suited Agata—after returning from France she joined the Polish national team and began to take part in junior international competitions. In 2005 she gained a first place for both leading and bouldering in the Polish Senior Championships.

"With good results in sport (and studying) I began to receive athletics and sports science scholarships, which for many years allowed me to focus on my climbing development," Agata explains. "In those years I visited many European climbing regions and tried my hand at climbing in the World Cup.”

Out on the crags Agata built up a similarly impressive track record of successes. In 2004 she redpointed her first 7c, Pequeno Bravo at Rodellar in Spain; the following year she climbed her first 7c+ (Ommadawn Direct at Podzamcze) and first 8a (Pepe el Boludo at El Chorro in Spain); she also got her first 7b+ onsight with The Speed Kings at El Chorro.

The steady arc of improvement continued in 2006 with two 7c onsights (Priapos in Kalymnos and Corps étranger at Céüse in France), and again in 2007 with her first 8a+:Sonce v Očeh at Osp in Slovenia. In 2008 she got her first 8b, Mrtvaški Ples, again at Osp.

2009 saw more consolidation in the grade eights and in 2010 Agata really hit her stride. She climbed four 8a+ routes and seven 8a routes, including an onsight of Adios Pepito at Rodellar, and then topped it all by redpointing her first 8b+: Kale Borroka at Siurana in Spain.

In the years since, Agata has continued to tick off grade eight redpoints and onsights, including Racing in the Street (8b) in Rue des Masques, Spit Bull (8a+/b) in Saint Leger du Ventoux, A Muerte! (8a, onsight) in Agiofarango, Crete, and Annapurna (8a flash) in Herculane, Romania. At Ein Fara in Isreal, where Agata lived for a couple of years, she also redpointed Russians in Space (8b), To Infinity and Beyond (8a+/b)and her hardest redpoint to date, Crossing Red Lines (8c).

Agata has also done some excellent boulder problems. In 2013 she climbed Jack the Chipper (7C) and From Darkness to Sunshine (7C), both in Magic Wood in Switzerland.

Agata is a well-travelled and enthusiastic Europhile, as evinced by her linguistic skills (she did a masters degree in Roman Languages and wrote a Polish-Catalan dictionary) and her taste in climbing areas:

“My favourite ones are Siurana in Catalonia, Céüse in France and Zillertal in Austria. As for traditional climbing areas I love the crags in Val di Orco in Italy and the orange sandstone of the Wadi Rum desert. And bouldering in Fontainebleau is super fun, too!”

She currently enjoys working in design and sales for a climbing wall manufacturer and loves planning and drawing new climbing centres.

Aside from climbing, Agata loves good food and music—having spent seven years studying classical guitar. She is also a keen skier and is looking forward to exploring the Alps from her new base in Genoa, Italy.

Whatever the future holds for Agata, her love for climbing remains as strong as ever:

“I like all styles of sport climbing: from slabs to roofs. I like technical, endurance and powerful climbing. I love dihedrals, pillars, crags…I just love climbing movement!”