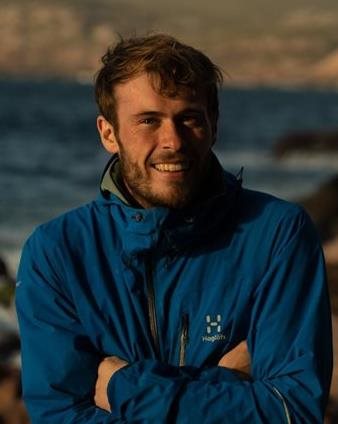 Alex is an accomplished young British climber, best known for his exceptional proficiency on hard highballs and bold trad lines. He has climbed approximately one hundred eighth-grade boulder problems, ground-up highballs up to 8A+ and serious trad lines up to E10.

Alex has always had a head for heights; something that got him into regular trouble with teachers in the school yard, as he scaled walls to retrieve stuck cricket balls from guttering. Despite earning him numerous punishments and reprimands, these early antics eventually led him to climbing proper when staff members, tired of his dangerous playground escapades, told him to join the school climbing club.

Soon Alex was taking every opportunity to climb, regularly skiving off from rugby practice and letting himself into the climbing wall, which he admits, in retrospect, to be quite dangerous.

“I was later caught,” says Alex, “as I made little to no effort to hide my illicit sessions, and to the school’s credit they then let me climb for half of the school year. But as a compromise I had to spend the other half competing in marathon canoeing. As a result, I got an early start at climbing and I’ve seen hundreds of miles of the south-west’s waterways."

Alex’s head for heights served him well as his climbing progressed through school and by 16 he had climbed his first E grade.

“To this day it was the most tooth and nail fight I’ve had for an ascent,” says Alex. “I think it was Fruitflancase on the Dewerstone. I remember actually trying to throw a Hex (DMM torque nut I expect…) into place at one stage!”

Quickly, Alex became more profiecient and started taking on harder routes up to E6, including Toltec Twostep (E6 6c) at Hound Tour, which he soloed.

“This was after school and was in no way a stylish ascent,” says Alex. “But I was overwhelmingly made up to have done it partly because Toltec was something that other, better, climbers often spoke about in the wall with an air of reverence.”

During this time, Alex was also bouldering to a high standard, ticking problems up to 7B+, including Gravitron (7B+) at Ansteys Cove, High Karate (7B) at Carrock Fell and King of the Swingers (7B+) at Lakeside Boulders.

In 2015, after finishing school, Alex moved to Ambleside and took on the serious and difficult Dawes Rides a Shovelhead (E8 6c) as his first route in the Lake District.

"[It] was a fairly stupid move in retrospect as I had no idea how to work routes or how much to trust pegs,” says Alex. “I took three massive falls onto pegs that Dave Birkett would later tell me were a hairbreadth from snapping the rock when he put them in several years prior to my birth. They’ve not broken yet though so maybe all is well..."

After this bold ascent Alex got “quite massively distracted” by bouldering and within months had increased his bouldering grade, first ticking Brad Pitt (7C) at Stanage and his first 8A, Tourniquet at Kentmere Boulders. For the next couple of years Alex ticked his way through a striking number of high-end boulders, including The End is Nigh (8A) at St Catherine’s Point, The Joker (8A) at Stanage and Jason’s Roof (8A) at Cookrise, to name but three.


Alex’s commitment to bouldering continued over the next handful of years, bringing both progression and consolidation as Alex amassed a healthy tick list of eighth-grade boulder problems, highlights of which include: Isla de Encanta (8B) at Shelter Stone; Karma (8A+) in Fontainbleu; Star Slinger (8A+) at High Prow, and Dan Varian’s Flip Flopera (8B) at the Bowderstone.

“No particular boulders stick out in my mind as more significant than others,” says Alex. “Maybe Flip Flopera because it’s so far from my preferred stye (it’s on very small crimps and I’m fairly sure I have the weakest fingers among my peers in bouldering). Perhaps Karma because it’s so famous and somehow representative of Fontainebleau, possibly my favourite place on the planet.”

“I like bouldering more for the stress-free atmosphere and the time spent with friends,” Alex continues. “Ironically, I don’t really like bouldering by myself, but I do on occasion get quite obsessed with the idea of getting up a particular boulder.”

Between 2018 and 2020 Alex nurtured his love of highballing (“much to my knees despair”) and found this to be the discipline he enjoys the most.

“Tim Blake and I made a good team attempting Northumberland’s test pieces ground up,” says Alex, “culminating in a day in which we climbed three iconic Back Bowden routes, County Ethics [E7 7a], Peak Technique [E6 6b] and The Dark Side [7C+ or E9 7b] all above pads.”

During this period of highball nurture, Alex climbed numerous high-end routes in ground-up, highball style, including The Magician (8A) at Ravensheugh, The Young (7C+ [or E8 7a]) at Callaly, Superbloc (8A+) at Moorside Rocks, and Ron Fawcett’s infamous Careless Torque (8A) at Stanage Plantation. He also made the first ascent of the eight-metre highball, Sign of the Devil (7C+/8A) at Howlerhirst Crag, which is currently awaiting a repeat.

“The Sign of the Devil meant a lot to me,” says Alex. “It had a bit of history to it even as a project. The wall that it’s on is properly spectacular and the climbing is some of the best I’ve done.”

“The Young was also fairly special,” he continues, “as Cal and I managed it ground up, which had become a sort of challenge in Northumberland. It’s also an excellent bit of rock and again has a good bit of history to it.”


More recently, Alex has turned his attention to hard trad climbing, and has climbed some incredibly bold and powerful test pieces, including headpoints of Dolphin Wall (E8 6c) at Spittal, The Keswickian (E8 7a) at Gouther Crags, Awkward Logistics (E8 6c) and The Ego Has Landed (E8 6b) at Eagle Crag, Nosferatu (E8 6c) at Burbage South, and Burn at the Stake (E7 7a) and Grievous Bodily Harm (E7 6c) at Reecastle; along with a flash of Live Fast, Die Young (E7 6b) at Wicket Gate.

In May 2022, Alex made news headlines across the country with his ascent of Longhope Direct (E9/10 7a) on Hoy, alongside Robbie Phillips. The adventurous route, established by Dave MacLeod in 2011, stretches for nine pitches up the towering sandstone cliff at St Johns Head, and includes an E10 pitch of French 8b climbing, a host of sea birds and some very dubious rock.

Alex’s years of highballing and trad climbing prepared him for the bold and technical climbing the route demands, but the rock quality and logistics of the Orkney sea cliffs tested his mental fortitude.

“In the early days on the route, I actually never stressed about the exposure or the logistics,” says Alex “even when I took a huge 30 meter-ish fall that broke gear and rock in equal measure. Later though, I was completely at my wit's end.

“The actual ascent took 12 hours and there were some incredibly dicey moments. By the time it was my turn to lead the crux pitch I’d been on the guillotine ledge for nearly two hours, was cold and tired and had only about 10 meters of easy climbing to warm up for quite a big fight.”

But the fight was on, and shortly after 10.30pm, in the rapidly fading light, Alex topped out the route, achieving what is undoubtedly one of the highlights of his climbing career thus far.

“I would do it all again for the enjoyment we squeezed out of it,” Alex told UKC, “but frankly, I'm glad I don't have to.”

Climbing is undoubtedly at the very core of Alex, and his appreciation for the sport runs through many aspects of his life.

“A lot of what I hold dear I have climbing to thank for in a way,” says Alex. “Friends, physical and mental health and well-being, motivation and aspiration. My job is much easier because of climbing, my interest in sustainable development is somewhat informed by climbing, etc. I think climbing has just had a great positive influence on many aspects of my life, I can’t help but love it.”

Alex, who now lives in Carlisle, shares his passion for climbing through his job as a care worker for traumatised youth.

“…the work can be incredibly rewarding,” says Alex. “The first kid I worked with got into climbing in a big way, which was the catalyst for a major change in his worldview. That was a pleasure to see and I hope he keeps it up and goes far.”

“Climbing and the world around it has always helped me out in good times and bad,” he continues, “and giving access to that to others has been very fulfilling.”

Alongside his care work and climbing, Alex—who has a BA degree in Outdoor Leadership—is studying with the University of the Highlands and Islands for a MSc in Sustainable Mountain Development.

“It’s been a fairly long process as its self-structured and self-funded,” says Alex, “but I’m just about to start my thesis in the coming weeks, which hopefully will be about land management and nature-led conservation.”

If there’s any time left amongst all of that, Alex enjoys reading, running and a good crossword. In the future he admits he’ll likely add road cycling to that list:

“I’ll probably take up road cycling, I don’t want to but that seems to be the way everybody goes so I’ll give in eventually.”