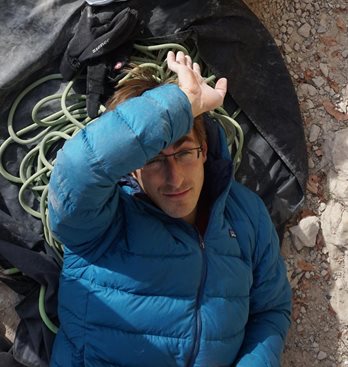 Felix is one of the best German sport climbers, a fact confirmed both by his recent ascent of the world famous test piece, La Rambla (9a+) at Siurana and the remarkable volume of French grade 8 routes he has climbed on crags across Germany, France and Spain.

Felix grew up close to Elbsandstein and was introduced to climbing by his father who is also a climber.

“When I was younger, I was brought nearly every week to the cliff," Felix recalls. "Of course at first I was more playing than climbing. Later on I started climbing and following the routes which my father had led.”

“The Elbsandstein is quite an old and traditional area. So the approach to climbing is very different than in other sport climbing areas. It is forbidden to use chalk and metal gear for protection. The protection on the routes ranges from ‘ok’ to ‘mortal/kamikaze’. Even the ‘ok’ routes are still quite exciting since there is a rule that the minimum distance between the ring bolts has to be a least 3 metres.”

This early apprenticeship gave Felix a strong grounding in the adventurous side of climbing, but his obsession really took hold when he led his first sport route during a trip to Valdurance in France. He started to climb more regularly, both outdoors and indoors. His fascination with climbing history also grew.

“I read all about the influential climbers, people like Kurt Albert, John Bachar, Patrick Edlinger, Jerry Moffatt, Ben Moon, Wolfgang Güllich and so on, and which routes can be considered as milestones," says Felix. "I developed a passion for finding out the possible meanings for the route names. Sometimes it is an analogy, for example, The Face [Stefan Glowacz’s famous route in the Frankenjura], and sometimes it is historical/provocative for example, Statement of Youth [Ben Moon’s classic 8a at Lower Pen Trwyn], Sometimes the meaning is unfathomable.”

As he trained more on the indoor walls Felix found himself drawn into the competition scene. He was good at it and in 2006 he came second in the World Youth Championship.

“It was a great time," explains Felix. "I enjoyed travelling and competing with friends. Onsight competitions depend on much more than pure strength. The mental aspect of being able to put all the energy of many hours of training and experience into one try, as well as having the necessary portion of luck to make the right decisions in the right moment attracted me a lot.”

Around this time Felix started studying at a serious level and found he did not have enough time to commit fully to competitions, so he quit and went back to his roots, focussing on the fun side of outdoor climbing. ‘Fun’ still meant climbing several 8bs in the Frankenjura, though.

With such a strong base to build on, a leap in standard seemed almost inevitable. Over the next few years the routes began to fall thick and fast, in fact he soon had ticked a few 8c routes, plus numerous other French grade 8s. Nonetheless, Felix credits his friend Alex Megos for the crucial shift in attitude that propelled him upward to a higher level.

“He showed me that hard climbing does not just mean pain and persistence," says Felix, "even if you climb in Frankenjura. By sending fast/direct and keeping it simple I was able to really start pushing my limit in rock climbing.”

Six months after this epiphany Felix managed to escape his home area of the Frankenjura and spend the winter studying in Spain.

"Living in Barcelona and climbing every week-end on the rocks boosted my motivation as well as my capabilities," says Felix. "I got in touch with a lot nice and partially fanatical people, and they made me learn a lot.”

Suddenly he started to tear through a succession of hard test pieces at Margalef and Siurana. The fruits of this purple patch were an extraordinary run of hard ascents, including several 8c+s, such as A Muerte and La Reina Mora. Things came to a head in March of 2013 when Felix climbed Estadao Critico (9a) and then topped it all almost immediately by redpointing the world famous, La Rambla (9a+) in Siurana.

Felix visited North Wales later in the year with the DMM European Team to sample some of the Welsh classics. One of the highlights was a very smooth ascent (albeit with the runners pre-placed) of the notorious Ron Fawcett route, Strawberries (E7 6b) at Tremadog. Upon reaching the top, Felix casually jumped off into the void and swung back into the belay.

Early in 2014 he continued to show great form, as evinced by his repeat of Markus Bock's Corona, a very fingery and powerful 9a+ in the Frankenjura.

Felix is currently back in Germany working on his Ph.D. designing electronical systems, making plans for more climbing in France and Spain and ticking off hard routes, like La Ligne Claire (8c) in St. Léger.

“For me, the interesting thing about climbing is to catch the day when things work perfectly and then… everything seems to be easy and natural, no matter how hard you've been trying," explais Felix. "The key is to be patient and keep trying. If there are set backs, then they're just a good starting point for improvements… and in the end ‘the journey is the reward’, so the most important thing is to enjoy trying.”