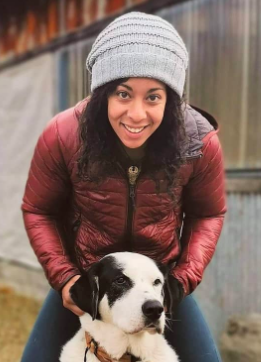 Genevive is an all-around rock climber, known for giving her all on every single climb. Utterly devoted to climbing, you could see Genevive clipping bolts, plugging gear or tussling above crashpads on any given day—but let her throw some heel hooks and knee-bars on a tufa-forested endurance roof, and she’s really in her element.

Genevive didn’t learn to climb until she was at college, but since then her love for the sport has influenced the course of her life, taking her to new places and new people. As recently qualified rock climbing instructor, Genevive is a passionate about sharing climbing with everyone, and using her qualifications and experience to encourage greater diversity in the climbing community.

“I want to bring a fresh perspective to the community,” says Genevive. “As a female and a climber of mixed races I’ve encountered several issues in the community along the years and feel like the best way to make change is from within. Through my skills and experiences I hope to create space for others to feel not only welcome but a part of the community, because we’re a family.”

After being introduced to climbing by a former boyfriend while at college in upstate New York, it took a few years for the climbing bug to take hold of Genevive, but when it did it didn’t let go. Climbing in the gym quickly shifted to climbing outside in the beautiful Shwanagunk Mountains, and led to Genevive buying a gnarly second-hand rack off eBay:

“I was made fun of constantly because all of my cams were rigid-stem Friends with slings that looked like they were from the 90s,” says Genevive, “but I was just excited to place my own gear so I didn’t care!”

After graduating college with a BA in Psychology in 2014 Genevive moved two states east to Rumney, New Hampshire, where she quickly sent her first 5.12 (7a+) sport climb, Social Outcast. The world-class sport climbing crags at Rumney proved to be a great training ground, and Genevive promptly set to work racking up more 5.12 routes without much trouble:

“I sent everything that year in four or five attempts and thought I understood the beauty of projecting!” says Genevive. “Then I started to try harder things and repeatedly got shut down on individual moves and sections. I began to think that I’d hit my limit but quickly found out that this was what projecting was all about! This was a humbling and pivotal moment for me; realizing that my body and mind were capable of more than I ever thought.”

It wasn’t just her sport climbing that was improving; her trad climbing was keeping pace and Genevive started hitting into the 5.11 grade range with ascents of the super-classic Carbs and Caffeine (5.11a) and the intimidating No Man’s Land (5.11b) in the Gunks.

With enough experience under her belt, and with an itch for travel that needed attention, Genevive started to look further afield for her climbing trips: to El Potrero Chico in Mexico, a two-month solo trip to Thailand, and road trips within the U.S. to iconic climbing destinations like Joshua Tree and Indian Creek. These trips cemented her love of travel, her desire to experience other cultures, and to meet fellow climbers from around the world. They also provided valuable confidence that empowered Genevive greatly.

Of the four months Genevive spent road-tripping solo in the south-west U.S. she says:

“Up until this point I’d felt dependent on others, mostly my boyfriend, to provide me with happiness, love, and self worth. And out of everything I gained on that trip the one thing I was most grateful for was my independence: making decisions for myself, putting myself first, and learning how to love myself fully”.

During that same trip Genevive found herself in Indian Creek, Utah, for the first time, and suffered the bitter beat down the sandstone splitters offer to almost all first-time visitors (“I couldn’t get two-feet off the ground the first day!”). But after three weeks of practising her jams she sent Incredible Hand Crack (5.10) and the 30-metre, hands-to-baggy-hands classic Supercrack of the Desert (5.10)—a superb effort as those with smaller hands often find this test piece particularly taxing. Subsequently, The Creek now ranks among her favourite climbing destinations.

“That’s what I like about climbing: constantly learning,” says Genevive. “If you’re just really good at everything and not learning it must be really boring!”

In 2018 Genevive packed up her life on the East Coast and headed out west in her Honda, not knowing that she wouldn’t return. A few months later she met her future fiancé and decided to settle with him in Denver, Colorado.

By this time Genevive had pushed through her repoint ceiling and was sending 5.13 routes, including the bouldery prow of Bigger Dog (5.13b/8a) in Clear Creek Canyon, Colorado; Thugara and STFU (both 5.13a/7c+) in Tensleep, Wyoming; and the endurance-testing Ultrasaurus (5.13a/7c+) in the Flatirons of Boulder, Colorado.

By mid 2019 the road was calling again and Genevive and her partner moved into their van. Their first stop were the steep sandstone walls of Horseshoe Canyon Ranch in Jasper, Arkansas, for 24 Hours of Horseshoe Hell. This notorious competition sees competitors saddle up to lead as many routes as they can in 24 hours. Genevive climbed a total of 177 routes and walked away with the female second place for most routes, and third place for highest point value. Genevive describes it as “a sufferfest, for sure, but worth every single second!”

Given that her introduction to climbing was on the Shawangunk’s famous quartz conglomerate, it’s no wonder that Genevieve holds trad climbing close to her heart. She undertook her Single Pitch Instructor training with an all-female cohort in 2018, and qualified in 2019. That autumn she ran her first trad climbing clinic at the Color The Crag Festival in Horsepens 40, Alabama.

Genevive passionately celebrates diversity within climbing, and wants to focus her work on facilitating access to the outdoors for underrepresented people and communities:

“It’s my way of taking my skills and connection with the POC community and giving something back,” says Genevive. “I want to focus on making [the community] accessible to lots of different people.”

“I want to enhance the ‘face of a climber—Not change per se, but include more faces,” she continues. “This isn’t just an issue in our community but society as a whole. Dealing with self-esteem issues growing up was sickening because there was nothing I could do to change certain features of myself to fit in. We all have our strengths, weaknesses, unique skills, and special techniques that make us who we are and they should be celebrated instead of unnoticed.”

“I’m really interested to get into it and see where it goes,” says Genevive of her developing career in the outdoors. “I’ve been focussed on travelling and climbing and training but the more people I’m meeting I realise I maybe can have an influence. I feel like I have this opportunity to maybe make a change. I’m just trying to figure out the tools that I have and figure out how I can use them to make a difference.”

You can learn more about Genevive’s experiences, and hear more of her thoughts on tackling racism, diversity, and representation in the climbing community, in an excellent Power Company Podcast, Black Voices Matter.

Outside of climbing Genevive loves petting all the dogs, playing a good, competitive game of tennis with her fiancé, and is a keen slackliner—although she’s ready to step that up to highlining sometime soon…