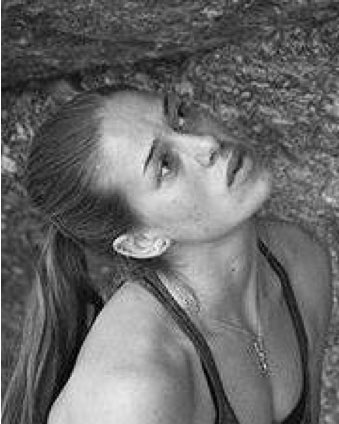 It can’t be easy being a climber in Denmark, a country that has been described as the ‘Kansas of Europe’ because it is so flat—the highest natural point is only 170 metres above sea-level—and within the confines of Europe has no crags aside from on the island of Bornholm.

For Michelle, born in 1991 and growing up in a small Copenhagen suburb, her first experience of climbing was as a 12-year-old at a local climbing gym during her school summer holiday. She quickly became hooked on it and quit all her other sports.

Her introduction to climbing outside was on a trip to Gorges du Tarn, France, in 2008, arranged by the gym-members. It made a big impression on Michelle.

"I still remember my first climb up a 6a," says Michelle. "It was a struggle finding my way, but it was love from the moment I pulled on the starting holds. On the same trip, I climbed my first multipitch route; four pitches up to 6c. I still remember us laughing, sitting at the top of the pillar thrilled about the climb, eating carrots and enjoying the beautiful view.”

Unfortunately, that same year she had a fall at the bouldering wall that left her with a shattered ankle and unable to climb for six months. The doctor thought she would never be able to climb again.

“At the time, climbing was everything to me," says Michelle. "To stop was not an option. As soon as I could fit my foot into the climbing shoe again, I went back to climbing, knowing I would be doing this for the rest of my life.”

In 2009 some friends invited Michelle on a three-week vacation to Les Actinidias—a family camping/climbing destination in southern France. She’d recovered well from her accident, although walking to the rock was hard and running was impossible.

Introduced to redpoint climbing she climbed her first 7c on the third day and after this her friends encouraged her to try her first 8a. Michelle recalls: “I often think back to this climb because I found joy in the process of trying it over and over again. Clipping the anchor on the last day of the trip left me feeling happier than ever. This made me the youngest female climber at that time in Denmark to pass the eighth grade, despite the doctor’s words.”

Since then Michele has travelled a lot, often by herself, meeting new people and teaming up with other climbers from all around the world.

“Meeting and climbing with others is a big part of my climbing life, and my travels have given me so many amazing memories and good friends,” says Michelle.

Her all-time favourite destination is Ceüse, France. She loves the crag's climbing style and even the long hike. Ceüse is where she has ticked her hardest climbs so far—spending the past four summers there, focusing on harder redpoints of the many classic routes with her first 8a+ being Face de Rat.

Preferring to go sport climbing when heading outside, Michelle had only bouldered indoors when training with friends, until one trip to Chironico, Switzerland, in 2015 when she was encouraged to try The Arête With The Pocket (8A). This problem became an eye-opener.

“On the second session, I had figured out all the moves and had some really good burns, linking the problem in two parts," says Michelle. "I realised that I was able to climb much harder than what I thought possible.”

This was a big motivator to boulder more outside and trips to Magic Wood, Sweden, Fontainebleau and Ticino soon followed. In 2016, she went back to the 8A in Chironico, worked out the moves again on the first day and found herself at the top on the second day after a good warm-up.“I couldn’t believe I’d achieved this goal of climbing my hardest so far in bouldering. It was amazing sharing this moment with good friends of mine.” recalls Michelle [Vid].

For Michelle, climbing has always been fun, even when fighting at her limit. When climbing, she describes it as feeling timeless.

“I can spend hours on the same route or problem—trying to figure out the moves, trying again and again," says Michelle. "Even though I keep falling off, something inside me keeps on fighting.”

At home, due to the lack of nearby crags, she only has the option of climbing on plastic. Luckily Michelle has always loved training, enjoying pushing herself and seeking constant improvements. Between 2015 and 2017 Michelle's training was focused on the European World Cups as a member of the Danish National Climbing Team. After a bad knee injury at the last world cup of 2017 she stopped competing to embark on a long period of rehab. Once recoverd she set off on a full-time climbing road trip of Europe with her partner.

“The decision to go traveling was the best choice," says Michelle. "It had been a long time since I’ve spent a longer period on rocks due to the competitions and training indoors. After gaining stability in my knee, I was still very afraid to take falls. Sometimes it has been a struggle, but I can’t imagine a better place to fight my fears and get back to climbing again, than outside in nature, where I love to be!”