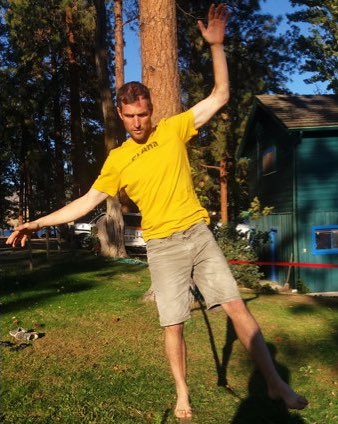 Born in Sheffield and brought up on the Peak gritstone crags by his dad, Pete acquired the technical skills required for hard climbing at an early age. As he grew older he also had the benefit of gritstone masters, such as John Allen, as mentors both on the crag and down the pub afterwards. He soon showed great promise and developed his remarkable climbing style.

"In the early days I climbed mostly on the grit with my dad and Graham Parkes, who both encouraged me to progress and gave me lifts out to the crag (and bought me beers afterwards)!” says Pete. “Later John Allen took me under his wing and we did first ascents from his back log of last great lines on the eastern edges. This was a brilliant apprenticeship."

A traumatic car accident as a teenager left Pete with restricted movement in his wrist and arm but this appears to have had little effect on his climbing, which has consisted of incredibly hard sport and bouldering achievements, as well as stout trad climbing ticks. Pete climbs quickly and uses his feet in extraordinarily inventive ways. One of his nicknames (he has many) is ‘Golden Heels’; this moniker was inspired by his astonishing ability to heel hook anything that comes in his path as he glides up routes.

After serving an extensive gritstone apprenticeship, which included ticking almost every climb on Curbar during guidebook research work, Pete moved to Llanberis in 1999 to study physical oceanography and mathematics at Bangor University.

Throughout his undergraduate degree and then his Ph.D., Pete became heavily involved in North Wales’ trad scene, onsighting many of the classic test pieces, such as Zero (E7 6b) on Suicide Wall in Cwm Idwal and Rumblefish (E7 6c) on Dinas Cromlech. He continued to journey over to the Pennine grit and fulfilled a number of life-long ambitions, including flashing End of the Affair (E8 6b) at Curbar and making a ground-up ascent of Master’s Edge (E7 6b) at Millstone; this latter achievement kick-starting a drive in Pete to get stronger and try hard.

After a bit of hard bouldering in Parisella’s Cave and trips to Fontainebleau, Pete began to steadily work his way through the hardest routes, adding a few of his own along the way, like The New Slatesman in 2008, a fierce 8b in the Dinorwig Quarries. He followed this shortly after with the first full repeat of the famous Johnny Dawes route, The Quarryman (E8 6c) in Twll Mawr. Later that same year Pete teamed up with Ben Bransby and made an extremely adventurous ground-up first ascent of Monkey Journey to the West (E7 6c) on one of the most impressive crags in the UK, Mount Sion West in Pembroke.

Long hard hours in Parisella’s Cave led to the second ascent of the phenomenal power endurance problem Silk Cut (8B). With this level of strength and fitness Pete was finally ready to do battle with the hard sport routes downstairs on Lower Pen Trwyn. The obvious target route was Jerry Moffatt’s Liquid Ambar (8c/+), which fell after many sessions and much effort in 2009. The following year Pete cleaned up yet more repeats on LPT, culminating in the second ascent of Ben Moon’s route Sea of Tranquility (8c+).

That autumn Pete returned to Parisella’s Cave and nailed the full version of The Incredible Bulk (8B+). The following spring he followed it up with arguably ‘the’ line of cave, Dorsal Stream, which connects Lou Ferrino into Bonnie and which weighs in at hard 8B.

In the summer of 2011 Pete was narrowly pipped to the post on the first ascent of Megalopa 8c+ down on LPT, but he made good by grabbing the second ascent shortly after and in the process completed the trilogy of 8c+ routes on this challenging crag.

2012 was another good year; in October he completed the stunning Diamond Dogs (8c+) on Little Orme and in the quarries he climbed the super-technical test piece The Dark Tower (8a+), while on Craig Ystumiau he flashed the first ascent of The Last Prince (E7 6c). Pete also started a very fruitful bouldering campaign in the Ogwen Valley, yielding a number of impressive highballs, including a desperate 8B called Isles of Wonder, and in early 2013, the first ascent of the most striking boulder problem in the valley: Snapdragon 8A.

During the summer of 2013 he continued to pick off the big lines on the Llandudno limestone. In June he climbed Pump up the Jam (8c), the infamous Pigeon’s Cave crack project and then in July he forced an outrageous line through the massive 15-meter-long central roof of Pigeon’s Cave before finally turning the lip: Dark Energy (8c+). In August a dabble with some deep water soloing on the Little Orme saw Pete make the first ascent of the Tide is High (8a+).

Being a true all-rounder there was no surprise when Pete joined forces with James McHaffie for a 'Super Sunday' on Dinas Mot in the Llanberis Pass, which resulted in four new trad routes, including Tropic of Cancer, a four pitch E7 7a.

Over the 2013/14 winter Pete turned his attention to the dolerite bouldering crags close to Porth Ysgo on the Lleyn Peninsula and made three stunning first ascents on perfect rock. First to fall was Speak of the Devil (8A), an immaculate line at Far Nefoedd. Pete followed this up with two impressive highballs: The Big Orange (8A) at Trwyn Talfarach and the Bytilith Wall(7C+/8A).

A burst of early spring sunshine prompted more new route activity from Pete on the Little Orme. The Runner Bean (8a+) and Triton& (8b) are both proud lines and great additions to the roster of classic eighth grade routes on the Llandudno limestone.

In June 2014 Pete developed Fedw Fawr, a superb limestone bouldering crag close to his new house on Anglesey. His best effort was the immaculate Mônster (8A). The following month he went on to complete the epic Ropes of Maui (8B) inside the Barrel Cave in the Llanberis Pass. The route-like proportions of this line left him well set for his next goal, a major sport project on the Diamond he had tried numerous times the previous year. This time it went down quickly and The Pink Star (8c+) was added to Pete’s ever-growing list of high-grade first ascents on the Llandudno Ormes.

In April 2015 Pete teamed up again with James McHaffie and the pair made the long-awaited second ascent of the three-pitch route Coeur de Lion (E8 7a) at Twll Mawr, 28 years after it was first climbed by Johnny Dawes in 1987.

In 2016 and 2017 Pete went on a boulder development rampage across North Wales, finding and climbing over 100 problems in the area, his hardest new additions being Hammerhead (8A+) at Fedw Fawr on Anglesey and Agent Orange (8A) on the Talfarach headland. This development spree was spurred on by the production of a new North Wales bouldering guidebook, which was published in 2017.

Pete was awarded his Ph.D. in 2008 and after several research positions is now a full-time lecturer in Physical Oceanography at Bangor University, where he conducts research in ocean modelling and marine renewable energy. He lives on Anglesey with his wife, Rachel, and continues to seek out new boulder problems and enjoy the world-class climbing North Wales has to offer.