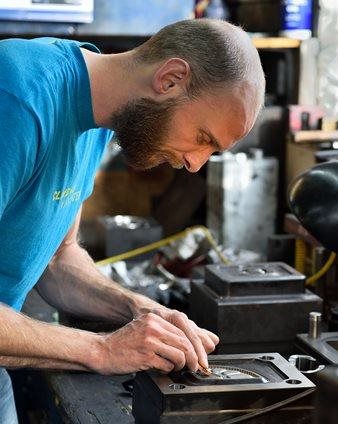 Peter is a boulderer of extraordinary talent and boundless enthusiasm. He is perhaps most famous for his first ascent of Unendliche Geschichte (8B+) at Magic Wood, Switzerland, but he has also been the Dyno world record holder and a successful bouldering World Cup competitor.

Peter was born in Stuttgart, Germany, in 1984 and lived there until aged eight. His family then moved to Kirchheim an der Weinstraße, close to Ludwigshafen, in the sandstone climbing area of Palatinate. It was here that he would start his climbing life in 1999 at the age of 15.

“I'd been in the mountains a lot with my parents but not really climbing," says Peter. "I started when I got a climbing course in a local gym as a birthday present from my parents. My first local climbing area was the Palatinate, a small but nice red sandstone area. Maybe that is why sandstone is my favourite kind of rock.”

“In the climbing gym where I started climbing there was a regional championship in 2000. I took part with some friends I was training with and ended up doing pretty good. I got 3rd place and enjoyed the comp. The next season I started in the German youth series.”

Soon enough Peter began to make his mark at a national and international level. In 2003 he came 15th in the Bouldering World Cup at Lecco in Italy.

“It was my first international competition," Peter remembers. "There was a hard qualification round and I did quite good because of a hard dyno problem I managed to climb, which only got a few ascents.”

In 2005 he won the German Boulder Cup at ISPO in Munich; in the same year he also came 9th in the Boulder World Cup in Moscow.

Three years later, in 2008, he famously broke the world dyno record with an unorthodox method (he stood up on the starting handholds). Unfortunately there is a strict ‘no feet on the handholds’ rule, which Peter was unaware of at the time, so the attempt was disallowed. He did subsequently hold the ‘official’ world record, along with Nicky de Leeuw, for a brief period after the Bouldering World Cup in Vienna in 2010 when he managed 2.725m. His current personal best in a competition is 2.77m.

Peter continued as a member of the German National Bouldering Team and in 2012 won the German Boulder Cup (in Überlingen) again: “I was really happy to win again seven years after my first victory at a National Cup.”

Yet competition successes are only half the story for Peter; he has also pursued a series of classic bouldering test pieces at climbing venues across the world. For his first 8A he chose one that suited his dynamic style: Circus Maximus is a very distinctive dyno problem in the Pfalz sandstone area of Germany. At the time (2003) Peter had avoided the multi-day, siege style common in hard bouldering, preferring instead to rattle through a high volume of classics.

In 2004 he changed tack, and in the process managed to leapfrog the 8A+ grade. The problem that inspired the shift in method was Cannibal Corpse, an 8B/+ at Arena Heidelberg.

"This was the first boulder I really projected." says Peter "It was in an area 30 minutes away from where I lived. I worked on it for 5 or 6 days. I did not care how hard it was graded or that I could not do some of the moves in the first sessions, I was just motivated to work the interesting moves and climb the line."

The highlight of 2005 was an ascent of the super classic, Dead Can’t Dance (8A) in the Grampians, Australia:

“After training a lot indoors and having a really good season in the World Cup I went on a half year round-the-world climbing trip with a friend," says Peter. "This was one of the classic boulders I really wanted to do on the trip.”

On returning home Peter moved to Stuttgart to study.

“I trained a lot in the gym for competitions and went on trips to other areas," says Peter. "Magic Wood was less then 4 hours away for example.”

His appetite for world travel continued though and in 2008 he went to Hueco Tanks, the renowned bouldering area in Texas, USA. The stand-out problem from the trip was Lee, Peter’s first 8B outside of Europe.

“It was kind of special to do something at the limit on a trip," says Peter. "Lee suited me perfectly; I was really happy to find something without heel hooks after tearing a muscle fibre in my leg some days before. I sent it on my last day in Hueco.”

The following year saw the defining act of Peter’s climbing life when he made the first ascent of Unendliche Geschichte, aka: Never Ending Story 1st + 2nd + 3rd (route) parts at Magic Wood. This extended finish to an existing 8B+ (i.e., parts 1 + 2, which were first climbed by Chris Sharma) required him to clip into a lead rope at the old finishing jug and then continue to the top of the boulder with yet more hard climbing. The overall difficulty of this extended boulder problem/route is 8B+, or around 9a.

“I was really motivated to do the whole thing after sending the lower parts," recalls Peter. "I checked out the upper undone part and brushed the top out. Finding out it was possible to climb all the way to the top instead of jumping down after the finish jug of ‘Never Ending Story 2’ made me even more motivated. I managed to send it after coming back for another two weekends. It was such a nice feeling standing on top of the boulder in that beautiful valley after doing the first ascent of the whole line.”

Other memorable ascents include Shosholoza (8A+) and Nutsa (8A), which both happened on the last day of a 2010 trip to Rocklands in South Africa, and Black Gold (8A+) at Red River Gorge in 2012. A trip to Macedonia early in 2014 brought the first ascent of the beautiful Sea of Clouds (8A+):

“A really nice line. I found it walking around in the mist, hoping for better weather. I sent it on a really nice day above the clouds and in the sun.”

Peter is not strictly a boulderer though; he often ties in when the opportunity arises, be it for sport, trad or multi pitch excursions. In 2013 (during a trip to the States with Alex Megos) he climbed the classic crack line, Desert Gold (5.13a) at Red Rocks and Riviera (5.13d) at Rumney in New Hampshire.

Since 2009 Peter has lived in Erlangen in the Frankenjura, although he baulks at the notion of being described as a limestone, pocket-pulling connoisseur: “

I would not call myself a real local for the Frankenjura," says Peter. "I still prefer sandstone or granite for bouldering.”

In 2018 Peter finished his degree in mechanical engineering (during which he undertook an intership at DMM!) and is now looking forward to more adventures around the world:

“What I like about climbing is that it is really complex," says Peter. "You always find new challenges. In competition bouldering every competition has its own new set of boulders and even if you try to do as many different moves in training as possible in the comp the boulder itself is a new one and you have to find a solution for yourself and do it.”

“Climbing outdoors I like traveling seeing different countries and bouldering areas and meeting nice people. I also like projecting and the process from seeing something you want to climb, finding a possible solution, training on a route/boulder and finally sending it.”