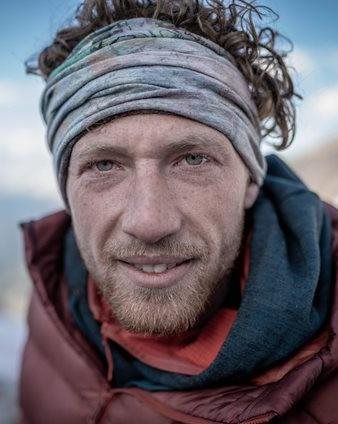 With values rooted in vision, perseverance and humility, and an aptitude for climbing honed since childhood, Quentin is has made a name for himself as an alpinist of excellent calibre. Whether forging new alpine routes, free soling committing winter lines or climbing with friends around his hometown of Canmore, he strives for excellence with good nature and without pretence. Despite being fuelled primarily by the complex demands of alpinism, he is an all-round climbing athlete, having climbed trad and sport routes up to 8b (5.13b) and boulders up to V9.

Growing up on the South Wales coast, in the picturesque town of Llantwit Major, Quentin was introduced to climbing by his parents at an early age.

“We lived right on the coast,” says Quentin, via email, “and I remember abseiling into the changing tides and top roping back out. I also remember hill scrambles in the north, dirty plastic holds, and old school gyms.”

Aged 13 Quentin and his family moved to southern Germany, where he was attended a school with an alpine climbing club. Under the mentorship of qualified or aspirant IFMGA guides, weekends in the Alps exposed Quentin to glaciers and soaring alpine walls that would captivate him fully later in life.

“The climbing club and distance running (running was the punishment for breaking the rules) saved me there,” says Quentin. “It was a fancy school, I didn’t fit in, and it sucked in almost every other way!”

In 2007, aged 15, Quentin’s family relocated again, this time to South Africa where he started sport climbing regularly, both inside and out. Under the guidance of some of South Africa’s strongest climbers, John Alexander and Hilton Davies, he was introduced to structure and training. It was also here that Quentin nurtured his childhood love of skateboarding and took up surfing.

After two years in South Africa, Quentin, who is Canadian on his father’s side, attended high school in Vancouver. He got his first rack—mostly DMM 4CUs—helped build a school climbing wall, started a climbing club and climbed indoors and out whenever possible.

“This was when I took climbing by the reins and dropped all other things,” says Quentin.

After finishing school Quentin climbed and scrambled his way around the Canadian West Coast, primarily in the Rockies where took some preliminary guiding courses. But after realising that climbing and guiding are not one and the same, he moved to Kelowna to study for a degree in Mechanical Engineering at the University of British Columbia (UBC), focusing on outdoor gear design.

“I studied a bit, but travelled and climbed more,” says Quentin of his time at UBC. “I had an incredible alpine climbing mentor called Chris Willie, who took me under his wing and took me on his expeditions.”

For Quentin, standout alpine achievements during his years at BCU include: the third ascent of Canadian Route (500m, 5.11+ C1) on Cerro Fitz Roy, Patagonia in 2016 with Willie; the first ascent of The Devil’s Reacharound (950m, M6 5.10 90deg) on Chacraraju Este, in the Cordillera Blanca, Peru with Alik Berg; and the first ascent of Hiding in Plain Sight (600m, WI5 M5) on Mt. Tuzo in the Canadian Rockies, again with Berg.

“I was learning to combine the separate skills and systems from a youth spent climbing into a cohesive blending of disciplines that could be employed effectively and efficiently in the mountains,” says Quentin.

During these years Quentin also started to free solo serious alpine routes, such as Regular Route  on the North Face of Edith Cavell in Canada. In Patagonia he made the first free solo ascent of M23 (300m, 5.9) on Aguja T48, fifty years to the day after the first ascent in 1916.

As well as hitting the alpine, Quentin was also bouldering, trad climbing, sport climbing and ice climbing both at home in Canada and abroad. Some highlights during his university years include the third ascent of Matt Segal’s notorious arête Air China (5.13d) in Liming, China; a one-day ascent of Moonlight Buttress in Zion Nation Park in the U.S.; Wings of Daedalus (5.13b sport) in Skaha; the first ascent of Fat Tug (M7+) at Mt. Stephen; the fourth ascent of Mythologic (WI6) in Okanagan; and boulders up to V8 in Hampi, India and V9 closer to home in Jasper.

Since graduating from BCU with his degree in 2017, Quentin has been pursing climbing with abandon. Initially working for a geotechnical engineering company in Vancouver, he later stopped engineering to pursue climbing full time, chasing dreams and objectives across the world.

“In the last years I’ve taken all the opportunity I can to travel and climb and explore,” says Quentin. “I’ve been all over the world and climbed new routes in places that I could only have dreamed of visiting. So incredible, and so lucky. I’ve been based in the heart of the Canadian Rockies and loving every moment. Training, climbing, travelling, and pursuing this passion.”

Of the many routes Quentin has climbed, both with partners and solo, since finishing college, a few stand out. The first was a free solo ascent of Striving for the Moon (1400m, WI6) on Mt. Temple, one of the biggest winter lines in the Canadian Bow Valley. Quentin first attempted the line in 2016 with Willie and Frank Cox. The trio made it to the crux pitch before having to turn back, but the attempt set Quentin dreaming of coming back to solo the line.

Another significant and poignant route for Quentin was Marc-André’s Visión (950m, 5.12b) on the East Pillar of Torre Egger, Patagonia, which he completed with Brette Harrington and Horacio Gratton in 2020 — a year after a first attempt with Harrington. The line, named for Marc-Andrés LeClerc who first spotted the line while soloing Torre Egger in 2016 but sadly passed away in a climbing accident in 2018, ascends the East Pillar before joining Titanic to the mountain’s summit. The route took the team four days in total. The day after getting down from Marc-André’s Visión, Quentin quested off on a free-solo ascent of Exocet (500m, WI5+) on Cerro Standhardt.

Two years later, again in Patagonia, Quentin undertook one of his most significant free solos to date: Torre Egger. Climbing alone up Spigolo de Bimbi to the summit of Punta Herron, then Espejo de Viento to the the 2,685m peak of Torre Egger, this was only the third ascent of its kind after Colin Healy and LeClerc each soloed the line in 2016 — LeClerc in winter.

“Roped climbing and soloing are similar in many ways, but soloing puts much more emphasis on the individual,” says Quentin. “Challenging yourself like that, alone in the mountains provides clarity. You see what makes you tick, what is important to you, and you confront your insignificance on this planet directly. That perspective is a powerful thing, and the result is pure gratitude. Gratitude for this passion, gratitude for your life, gratitude for the people in it, and gratitude for this planet.”

Quentin dedicated his solo ascent of Cerro Torre to friend Corrado "Korra" Pesce, the Italian guide and alpinist who tragically died after completing a new route on Cerro Torre the same day.

In early 2022 Quentin teamed up again with Berg and made the first ascent of a huge, completely independent line, Reino Hongo, on the East Face of Jirishanca (1100m, M7) in the Cordillera Huayhuash in the Peruvian Andes. The true summit of Jirishanca has seen very few ascents, and on his Instagram, Quentin described the line being “full of question marks” before he and Berg started up: “Steep complex snow, tricky mixed terrain, massive cornices, wild ice mushrooms, and a steep headwall at 6,000m”.

Later that same year, Quentin and Berg made the first ascent of the East Face of Mount Forbes (700m, M4 WI3). With a 17 mile walk in, the remote and formidable face on the tallest peak in Banff National Park was often talked about but hitherto unclimbed, earning Quentin and Berg more nods from the alpinist community.

Yet being celebrated for his achievements is far from what drives Quentin to seek excellence in alpinism.

“I’ve found nothing that helps me to understand myself better than climbing and alpinism,” says Quentin about his motivation for climbing and particularly alpinism. “Nor is anything so unquestionably motivating. I don’t need to justify it, the drive to pursue it is just there and it always has been.”

“I climb for the adventure and exploration of both the natural world, and the wilderness inside of us,” he continues. “I have always been fascinated by the legendary climbing tales; especially when the experiences forced strength of character. I think that is a huge part of what I love about climbing. It can be a pursuit that repeatedly requires a training of the self, and confrontation of the ego. This is true for all climbing, especially for alpinism.”

During the COVID-19 pancemic, Quentin trained as an arborist and worked locally in Canmore. Now he’s back to full-time climbing but is also exploring videography. When he’s not climbing, running, skiing or hiking, he still dabbles in skateboarding and occasionally has time to re-connect with his childhood love for playing music. He also never let go of his dream to design climbing equipment.

"[In 2032] I’ll be forty,” says Quentin when asked what the next decade holds. “I’ll have won the lottery, been Prime Minister, soloed the Rupal face, and be retired!”

Perhaps he’ll also be designing equipment for DMM. Who knows?