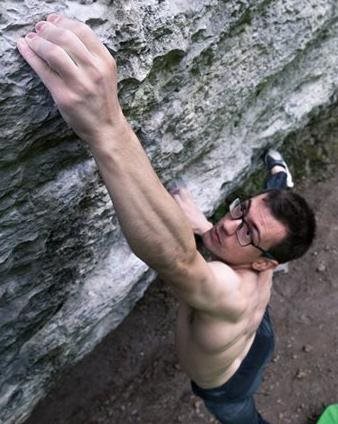 Will Bosi is one of the most highly accomplished climbers in the UK. He was the second Brit to climb 9b, the youngest to climb 9a, and in 2018 became the first male competitor to make a World Cup final in decades. Having already reached the upper echelons of climbing achievement, it’s exciting to think what may lie ahead for this committed and talented young climber.

Will, who hails from Edinburgh, Scotland, was introduced to climbing when he was six years old by his brother and says he was hooked straight away. By the time Will reached his teens he was making good progress through the grades, climbing his first 7c, 7c+ and 8a in 2012, when he was  just 14. That year he also qualified for the GB Junior Team and made finals at his first IFSC World Youth Championships, held in Singapore, where he placed fourth. The following year, alongside ticking his first 8a+, 8b and 8b+ routes, he also claimed two silver medals at European Youth Cup lead and speed events.

“Back then I had no idea really you could be a professional climber,” says Will, “but I definitely knew I wanted to climb as much as possible!”

Clearly, Will was starting to make a name for himself as one of Britains best young competition climbers, but his achievements outdoors were fast proving that the youngster was one to watch on real rock, too. His first landmark outdoor ascent came in 2015 when, at 16, Will climbed his first 8B+ (V14) boulder, Monk Life, at Kyloe-in-the-Woods, Northumberland. Impressively, it took Will only two sessions work out the moves before sending the boulder promptly on his third visit.

Little more than six months later, Will achieved another landmark ascent—and made history—by becoming the youngest Brit to climb 9a. Then 17 years old, Will took eight sessions to complete Steve McClure’s infamous Rainshadow at Malham Cove. According to Will this route constituted his first real project, taking eight days to achieve, whereas previous routes he usually climbed within two days.

“[Rainshadow] had been a goal of mine for so long,” says Will, “so the feeling of topping it out was amazing! However I definitely had other routes in mind so I knew it was a stepping stone.”

One of the “other routes” Will had in mind was Hubble at Raven Tor, and this was the the next seriously high-profile route he turned his attention to in the autumn of 2016. Since being upgraded from 8c+, the Ben Moon line from 1990, which contains a powerful 8B+ crux section on undercuts, is considered by many to be the first 9a route in the world.

“They are both very different routes style-wise, that’s for sure,” says Will of how the two 9a routes compared. “Rainshadow took eight sessions whereas Hubble took six, but I’m definitely more of a power climber, so Hubble suited me better.”

More tough routes fell in 2017, both at home and abroad. On a short, 12-day trip to Siurana, Will racked up a most impressive holiday tick list, including: a single-day ascent of Jungle Speed (8c+); a quick two-session repoint of A Muerte (8c+); a flash of El mon de Sofia (8b+); onsights of Cronica (8b), Memorias de Una Sepia (8a), Minimal Teckno (8a) and Anemone Nipapa (8a); and rapid ascents of Directa Cornualles (8c), V de Vendeta (8b+), Migranya (8b) and Cop de Cigala (8a+). Back in the UK it took just three goes for Will to tick Jerry Moffat’s rarely repeated and heinously crimpy Evolution (8c+) at Raven Tor, during a day trip out from training.

The following year, Will made the highly anticipated first repeat of Malcolm Smith’s Hunger, Scotland’s first 9a at the Anvil. The long and overhanging route took Will four days of effort—two of which were in prohibitively poor conditions. Then, later that year, in between international competitions, he sent his first 8C boulder, Practice of the Wild, while passing though Magic Wood in Switzerland.

“I hadn’t really tried any hard boulders since I climbed Monk Life, so I really didn’t know how I would get on,” says Will, when asked if he was surprised to have completed the V15 bloc in only two sessions. “I was really surprised on the first session when I got most of the moves down and realised I could do it.”

A few weeks later, at Kyloe-in, Will took three sessions to climb The Prow, Andy Earle’s 2003 test piece that tracks poor crimps and shallow pockets up an intimidating 12-metre arête, now given a highball boulder grade of 8A. Demonstrating his cool under pressure, 18-year-old Will sent the route after three successful toprope practice runs where he worked the moves and identified the no fall zone.

However, the biggest prize, and one of Will’s proudest achievements, came in February 2020, when he made history yet again by completing the fourth ascent of La Capella in Siurana, becoming only the second Brit ever to climb a 9b sport route. The route, which is only 15 meters long, was first climbed by Adam Ondra in 2011 and has two intense crux sections weighing in at around 8A.

“Lost for words,” wrote Will on his Instagram after completing to route. “One of my dream lines ticked off the list.”

Later in the year, during the post-lockdown summer, Will rapidly ticked off some seriously high-end local boulders and routes, including two 8A+ boulders at Griff's Buttress in Blackwell Dale, Bewilderness (8B+) at Badger Cove in just four attempts, the technical roof of Tomahawk (8B+) at Impossible Roof, Superman Sit Start (8B+) at Cressbrook, and the fingery sport route Eugenics (8b+) at Rubicon.

“I think because I don’t get much time outdoors I really try to make the most of it,” says Will, when asked why he thinks he manages to climb such elite routes and boulders so quickly. “I’ll spent a lot of time researching the route I want to try and watching any videos I can find. So when I get there I already know what I should be doing, then all I need to do is do it.&rdquo

Will, who is based in Sheffield, now has his sights firmly set on 9b+. And if his track record is anything to go by, it’s possible we could be celebrating him reaching his goal in the not-so-distant future.

What’s perhaps most impressive, is that during these years of staggering outdoor achievement, Will’s focus was actually very much on competition climbing and training. As a long-serving member of the GB climbing team he competes in a full suite of international competitions every year and plans his outdoor climbing and training around these events.

During his time on the GB Junior Team, between 2012 and 2017, Will made finals in numerous European Youth and World Youth competitions in lead, bouldering and speed, and claimed a total of four Bronze and two Silver medals. He also placed an impressive 4th at the Combined World Youth Climbing Championship in Innsbruck, Austria, in 2017.

In 2018 Will transitioned into the adult circuit and at the second lead climbing event of the year, held in Chamonix, France, he became the first British male to make an IFSC Lead World Cup final in an estimated three decades. Will came within three moves of the podium after climbing superbly throughout the competition rounds, and eventually placed 5th. This performance ranks as Will’s proudest in his competition career. The following year, back in Chamonix, Will placed 4th in the lead and speed event, and then 4th again at the following lead event in Bricançon, continually proving his place among the best in the world.

“I’m a very competitive person so testing myself against others feels natural to me,” says Will. “For sure the best bit is performing in front of a big cheering crowd, the feeling and energy you get from that is incredible. There are however a lot of downsides. For instance, usually comps are expensive and if you make a mistake all the training and time you’ve spent feels wasted—but these are definitely outweighed by the positives!”

Will is the current British speed climbing record holder, having repeatedly beaten is own time down to a current best (as of August 2020) of 7.07 seconds; a record he set at the in Chongqing, China in 2019.

“I love how measured [speed climbing] is, as you always know if you are improving or not with the time,” says Will. “Being really competitive I get really psyched to get faster.”

Much of 2020 was spent focusing on qualifying for the 2121 Olympics, whihc was disrupted by the Coronavirus pandemic.

“Lockdown [due to the Coronavirus pandemic] happened two weeks before the last selection event for the Olympics, so that was quite a big shock as my whole year was based around that competition,” says Will. “The competition was postponed until late November so I’ve just continued my training and I’m focusing on that.”

Unfortunately, Will's journey to Tokyo ended at the European Continental Championships in Moscow, in November 2020, where he missed out on the last available Olympic place, despite making the Combined Finals. The 2024 Olympics will no doubt already be in his mind.