Ever since people have needed to lift heavy objects, pulleys have been renowned for their potential to both exert amazing forces and also to baffle their users. Here George Smith attempts to explain some of those things you’ve always wondered about pulleys, but were afraid to ask.

It’s a configuration of ropes, pulleys and connectors that enable a person to pull… er … more than a person can pull. They tend to have a fixed end joined to an anchorage, and a moving end joined to what we’ll call the movable object. In between a number of rope turns share the load to provide mechanical advantage; the only disadvantage being the more turns - the more rope to be pulled.

If the chosen system is over-engineered it will cause unnecessary hauling. If too many turns are put in the friction will off-set the mechanical advantage grinding things to a miserable halt. Mind you; so will an under-engineered system…

There will be other considerations too: can the selected rig be easily learned? Can it go unexpectedly wrong? What if YOU are the load?

A. No. It’s a system with a pulley! And very handy it is too. A kind of cheap see-saw; it is the basis of the ‘stirrup hoist’ used in rope-access rescues, enabling one person to easily lift another. It’s just a rope through a fixed high-point via a pulley (as good a pulley as you can get your hands on).

Q. How does it work?

A. Well, you place an object on one end and counter-balance it with bodyweight on the other.

A. Nothing to be honest! But then, if you also exert a lifting force on the rope supporting the object, it will come up a short distance with surprising ease (fig 2).

Q. Any other use?

A. Yes sometimes it’s useful to raise an object by pulling in a particular direction, but beware, this puts a lot of strain on the pulley / deviation point, so make sure it is strong enough (fig 3).

What do they involve?

A. It’s essentially a loop of rope with a pulley at the mid-point. One end is anchored and the other can be lifted or lowered (fig 4).

Q. How does it work?

A. Well, if you suspend an object at the pulley, its mass is divided evenly over the two lengths. When you pull on the lifting (or belaying) end you are only ever dealing with approximately half that mass, as the other rope continues to hold the other half. However, it’s not magic as the pay-off is that you have to pull twice as much rope to move the object.

Q. Does that matter?

A. No. You just need to pull more! Or you might want to lower; this system halves the load on any belay, so it’s even useful when you are only paying rope out. 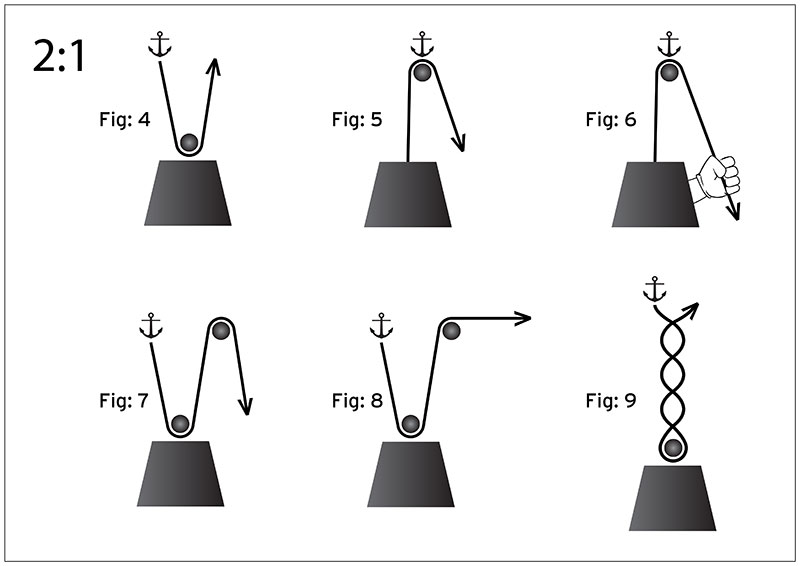 Q. What if you turn it around and suspend an object via a pulley at the high-point (fig 5)?

A. We’re back to the 1:1 ‘stirrup’ with no actual mechanical advantage.

Q. What if the ‘object’ is a person pulling on the moving rope (fig 6)?

A. Ah. Now you have shared the load across two ropes again, so this is another, less well known type of 2:1 pulley (it could be a winch rather than a person.)

A. Just less efficient types of 2:1. But again, handy if you want to use weight to pull down (fig 7), or pull from a different direction (fig 8).

Q. So what could possibly go wrong?

A. Ooh… back to the ‘loop of rope’ we started with. Now, if the system twists over any distance through spinning of the suspended object the whole thing will grind to a halt, due to monstrous friction. If this is likely, put a swivel in between the load and the pulley. Worse still; as the system operates, one rope moves whilst the other remains still. So if the moving one crosses or even touches the other, it can cause a melt, and so, a generally bad day (fig 9).

Q. Any other down-sides?

A. Exhaustive tests have shown that with 50m of rope in a 2:1 configuration you will only reach… 25m!

Q. Do you actually need the pulley itself?

A. No! Strangely a carabiner will still provide crude mechanical advantage, but it involves much more friction. Sometimes a pulley is inconvenient; here a Revolver carabiner would come into its own.

A. Weirdly - no. Not if you are lifting something that is round - like a log - as you can just rotate the object. The commonest example would be a ‘parbuckle’ which is a way of rolling someone into a boat using a couple of long slings.

Q. Neat for fishing loggers out of a river?

A. Yes; at least they will appreciate the principle behind their extrication.

Q. Is that the mechanical advantage; or the odds of it working?

A. It is the mechanical advantage when an object is suspended by a rope (fig 10), with the rope returning to the object a second time. Or as shown in fig 11; where the rope passes through a rope-lock and heads back to the anchor. 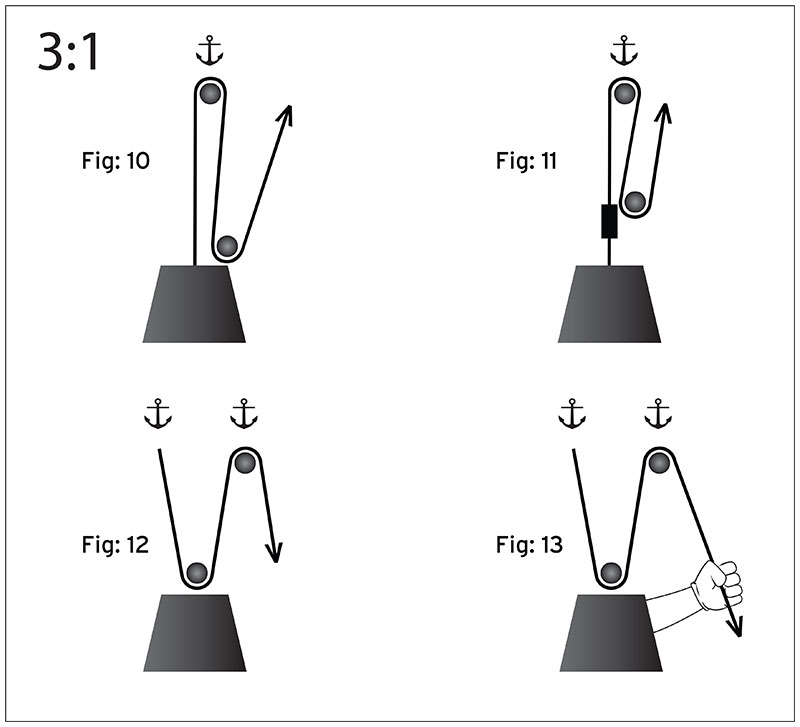 A. Well it is the most versatile and easy-to-learn system around and it can be applied even after the object is out of reach by using a movable rope-lock (to keep pulling the object you will need to frequently re-adjust it by adding an auto-locking belay system at the anchor.)

Q. What if it spins in suspension?

A. It’ll be rubbish, so avoid this or obtain a swivel.

Q. What if it runs over an edge?

Q. What if this proves difficult?

A. Either hang your head in shame, or consider the possibility of gearing up…

A. They both entail a rope being passed through a set of double pulleys but they have very different functions.

The 4:1 can be suspended from an anchor so that the exiting rope is pulled downwards or sideways by the operator (fig 14). The anchorage is bearing the mass of the lifted object plus the additional force exerted by the pulled rope. Watch out - if the anchorage is a tripod you may exceed the rated capacity or you may simply pull it over! 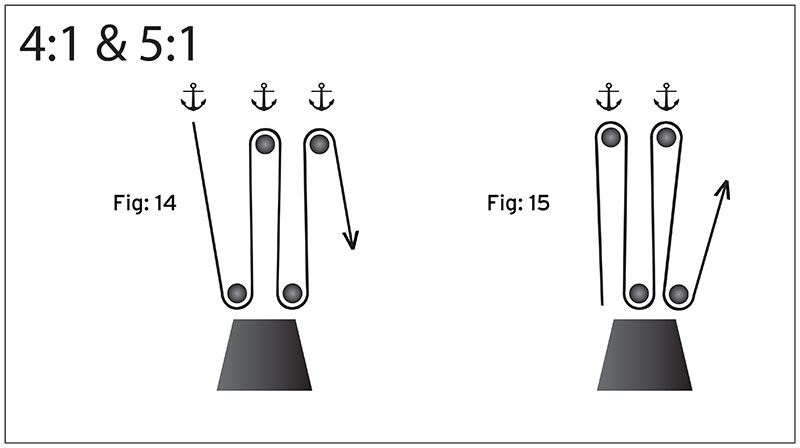 A. Well it lifts more. It also places less force on the anchor because a fifth of the lifted object’s mass is supported by the operator when they pull on the exiting rope (fig 15).

The downside is that if you are near an edge (eg. the top of a shaft) that the exiting rope may be running over it. Oh and needless to say 50m of rope only gives you 10m of lift.

Q. What else could possibly go wrong?

A. Either system could twist so that the ropes rub against each other. At best this will cause friction, at worst a melt.

Q. How does a rope passing through all these pulleys know what damn ratio it’s in?

A. Oh no; we’ve hardly started. Here is a way to generate huge advantage by applying one 3:1 to another. The first pulley will need an auto-locking capability, but the system enables you to lift an object with relative ease, even a distant one (fig 16). 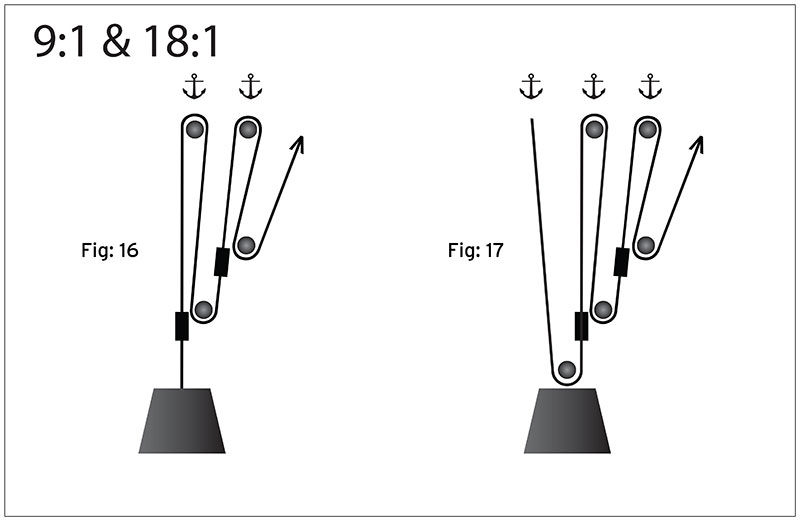 Q. It looks easy to learn, any disadvantages?

A. Only that you have to keep adjusting the rope-locks, particularly on the smaller 3:1.

A. Yup… Resistance is Futile!

George Smith is a member of the tutor team at Outreachrescue based in the UK. He has twenty years experience working with emergency services from many different parts of the world. His specialisms are the delivery of work at height and rope rescue applications along with water rescue systems. He has also spent an unspecified number of years hanging from ropes, as evidenced by his long involvement with DMM over on the climbing side. In 2008 he co-directed the award winning film Upsidedown Wales.