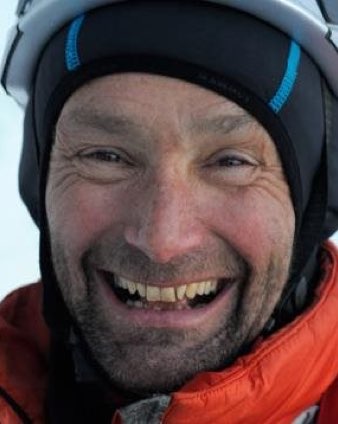 Nick is a ball of energy, constantly on the move and striving for a lifestyle uninhibited by commonplace and boredom. As one of Britain’s most accomplished climbers his list of hard trad ascents, new rock routes, ice climbs, Scottish winter ascents and high-alpine expeditions is borderline excessive, and it’s clear his motivation is far from dwindling.

“My climbing is dictated by the seasons and my motivation,” says Nick. “If it's cold I wear gloves and several jackets and climb ice or go out in the hills… if it's warm I wear shorts, a chalk bag and go climb rock… And if the bird restrictions are off I go climb cheese and talc and slither in guano at Gogarth.”

Nick, who grew up in Cheadle, Staffordshire, started climbing in 1993 while working as a Physical Education instructor in the prison service. The demanding job equipped Nick with important skills to cope with the harshness of modern alpine climbing and ultimately propelled him forward into an extraordinary climbing lifestyle. Nick left the prison service in 2003, by which time he was already fully immersed in the climbing scene.

When not away on expeditions, Nick bases himself in North Wales. The location suits his preference for exciting traditional routes and he has amassed an impressive head count of E7s, especially on the North Stack wall at Gogarth where he has climbed almost all the famous E7 6b test pieces, including The Bells! The Bells!, The Hollow Man, Flower of Evil, Demons of Bosch, The Clown and A Wreath of Deadly Nightshade.

He is also a prolific first ascentionist, particularly on scary sea cliff “death choss”. His routes in North Wales include, among others, All the Pretty Horses (E6 6b), Cities of the Plain (E6 6b) and No Country for Old Men (E5 6a/b), all on the Equestrian Walls at Porthllechog, and Blood Meridian (E6 6a) on the infamous Stigmata Buttress at Craig Dorys.

In 2011 Nick made the first ascent of Frumious Bandersnatch (E7 6c) at Rhoscolyn and then managed to repeat Stevie Haston’s notorious Melody, a heart-stoppingly serious HXS/E9 at Craig Dorys. Nick revisted his taste for Dorys choss in 2018 and made his own serious additions to the sea cliff: Pushing for Rail (E8 6b), which climbs the steep wall immediately left of Melody, and The Zither Player (E7 6a), which climbs a steep wall and shallow arête. He also made the second ascent of another Haston line, Requiem for a Vampire (E8 6b).

A partnership with Guy Robertson proved particularly fruitful. Highlights for this formidable team included the first ascent of Godzilla (IX 8) on Beinn Bhan in 2011 and in 2013 the second ascent of Mort (IX 9) (with a third team member, Greg Boswell) and first ascent of Nevermore (X 10), both on Lochnager. In February 2014 Nick climbed Crème de Violette (IX 9) on Beinn Eighe with Tim Neill and described it as “one of the most sustained and fulfilling outings ever.”

Nick has also spent a lot of time playing on steep icefalls around the world, ticking off numerous WI6 routes, such as Sea of Vapours in the Bow Valley, Canada, and Dame du Lac near Morzine, France. In early 2013 he climbed a slew of impressive thin ice routes in New Hampshire and a trip to the Canadian Rockies with Greg Boswell at the end of the year saw Nick climb some excellent mixed routes, including the thin, trad-protected crack, Victoria’s Secret Deviation (M7++), Rocket Man VI M7+ WI5+), Man Yoga (M8) and The Maul (M7).

Yet it is on the bigger routes in the high alpine that Nick has really shown his class. His alpine record is exceptional, particularly in the Chamonix valley where he made the first ascent of Border Line (ED3, VII 8) on the Sans Nom and the first free ascent of Omega (ED3, VIII 8) on the Petites Jorasses, as well as a whole host of repeats, such as Beyond Good and Evil (ED3) on the north face of the Pelerin.

Nick has been on over two dozen expeditions to places as far flung as Peru, Nepal, Pakistan, India, Tibet and Alaska, bagging first ascents, including Fear and Loathing (ED3 VII 6+ A2) on the southeast face of Jirishanca and Central Buttress Direct (ED2 VII 7) on Quitaraju, both in Peru, and in a five-day alpine-style push the ED+ Central Spur of Chang Himal in Nepal. His first ascent of the North Buttress of Nyainqentangla South East (7046m) in Tibet (ED+ 1600m) with Paul Ramsden, which the duo climbed over seven days in October 2016, was honoured with a prestigious Piolet D’Or in 2017.

In 2012 he made a rare repeat—only the sixth ascent ever— of the technical and committing Slovak Direct (WI6 M6+ A2) on Denali, Alaska, with Andy Houseman in an 84-hour push in challenging weather conditions.

Of all of Nick’s endeavours, his prime time in the sensationalist mainstream media came in November 2015 after he and fellow alpinist Greg Boswell survived a terrifying grizzly bear attack on Mount Wilson in the Canadian Rockies during which Boswell was badly bitten by the animal, who thankfully abandoned its attack. Nick describes the frightening ordeal in the article Worst Nightmare: Grizzly Attack in the Cold Wilds.

In 2018 Nick teamed up with Ramsden again on an expedition to a remote region of Tibet to attempt a new route on the south buttress of the 7,500-metre Minya Konka. On his blog Nick wrote: “After Tibet in 2016 I said never again, but there is very little in my life that stirs my imagination more that entering a deserted valley that hardly anyone has visited, and the thought of finding a line on a massive unclimbed face, that nothing is known about, and no one has ever attempted, is such a creative and life enhancing experience for me, it’s almost impossible to say never again.”

And despite what you’ve read here, Nick’s life is not all climbing; he still finds time for drinking cheap red wine and for writing, and has received international recognition for his written work.

In 2012 Nick published his first book, Echos: Once Climber’s Hard Road to Freedom. This debut publication received widespread acclaim and was shortlisted for the Boardman Tasker Prize and the Mountain and Wilderness Literature category at the 2013 Banff Mountain Book Festival. It also launched Nick into the broader realm of mainstream media, as evidenced by his appearance on Midweek, the popular BBC Radio 4 show.

In 2017, Nick's essay Threshold Shift, published in Alpinist magazine, won the Mountaineering Article category at Banff Mountain Book Festival. The following year his widely anticipated second book, Tides: a climber's voyage, was again nominated for the Boardman Tasker Prize and won the Mountain Literature (non-fiction) category in the Banff Mountain Book Festival. When the news was announced, however, Nick was on the Minya Konka expedition and did not learn of the book’s success until his return.

Nick also writes an entertaining, thought-provoking and regularly updated blog with musings on his latest adventures, be it on the crag or up a big mountain in a faraway country.