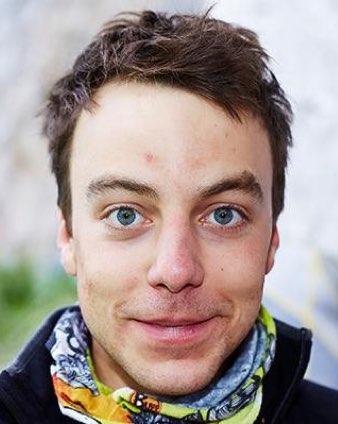 Andy is one of Switzerland’s most prolific sport climbers, with an impressive tick list of over 300 eight-grade routes, over 50 of which are graded 8b+ or above. But it’s not just about the numbers; the beauty of the crags and the creative aspect of new routing are very important to him, too. To this end he has made numerous top quality first ascents, significantly expanding the canon of classic sport routes in Switzerland.

The roots of Andy’s climbing life began during his childhood. He spent a lot of time enjoying the natural environment with his parents. This initial contact with wild places piqued his interest in the outdoors and before long he was taken in by the lure of the rocks.

“I made my first steps into climbing while on holiday in the south of France," says Andy. "I was surrounded by flavoursome herbs and a nice landscape. On the limestone I tried to reach the top of a wall. The following year I was able to try another route, which was a bit harder. Happy about this progress I was touched by the sport.”

Andy was captivated by the sight of other climbers out on the crags:

“From the early beginning I was inspired by these athletes who were climbing with an amazing flow on the rock with their tight lycra-pants. Almost like dancers. Such as the competitor, Francois Legrand.”

In 2001, aged 12, he started to train regularly for climbing. Even at this tender age he adopted a very methodical approach.

“I have always documented every hour of training since the start," explains Andy. "So there is a nice collection of small books with notes. One sort of perfectionism, which I am still making.

Despite an early interest in training and progress, Andy was still very much enchanted by the beauty and ambience of the crag environment.

“It was still the experience of a nice day in nature which was really motivating me," he says. "There were some crags which were near my home. So I could often go outside. Places like the Jura. The routes were mostly vertical, short, with poor footholds and a bouldery crux.”

During his teenage years he was a regular participant in national competitions, but over the years his enthusiasm for indoor competitions waned.

“I didn’t really have the spirit of a competitor," says Andy. "Beating others to be the best doesn’t suit my character. It soon became less important to me than real rock climbing.”

Out on the crags his standard had started to rise. In 2006, at the age of 17, he climbed three 7cs and three 7c+s. The following year he broke the magic 8a grade, climbing five routes at this standard, three of which were first ascents. Andy then topped it all by redpointing his first 8a+ at the Swiss crag, Twann.

2008 saw him break into the 8b grade with Darth Vadar, again at Twann. He also managed to tick eleven 8as and nine 8a+s during this year, including the first ascent of La Choucroute du Gab at Das Boot.

“I began to bolt routes and do first ascents," explains Andy. "A necessary way because there are not so many steep and hard routes in the Jura.”

In 2009 Andy’s arc of improvement continued to soar upwards with a breakthrough into the 8b+ level and an escalating number of grade 8 routes: twelve 8as, nine 8a+s, two 8bs and three 8b+s! He also climbed his first 7C+ boulder problem: Luciano at Valais.

Andy’s preference for endurance routes was well established by now. His flexibility and static, controlled style suited the long, stamina test pieces. He also built up impressive levels of fitness, which allowed him to make repeated attempts after less-fit climbers had packed up and left the crag.

2010 saw yet more 8b+s, but it was 2011 when Andy really raised his game, redpointing three 8cs, onsighting 8a+ and racking up an astonishing number of ascents: twenty 8as, eighteen 8a+s, eleven 8bs and two 8bs, one of which was a first ascent.

During 2012 Andy focussed more on the upper grades, ticking four 8cs, five 8b+s and eleven 8bs. His taste for the creative aspect of new routing remained strong, for example, one of his 8cs and three of his 8b+ redpoints were first ascents, including the immaculate looking La Face Cachée du Mur.

The years that followed were less frantic, but still the impressive numbers of eighth-grade routes continued, including Nordic Flower (8c+) in Flatanger, Norway, and in 2016 Andy ticked his first 9a, Jungfrau Marathon  in Gimmelwald, which was his focus for several years.

“I like the classic way of working on a route for a long time, even though this is often very difficult mentally," says Andy ."I never give up and that’s one of my strengths, I think. It’s always a project which captures me. Then it can’t be thrown out of my head until it’s done—even if it takes weeks or years.”

In 2017 he climbed Ras le Bol (8c+) in Syratu in only two weekends— evidence of progression in achieving hard routes faster. This was evidenced again later that year when he climbed Manana es Mejor (8c) in Syratu on his second go. Also in 2017 he bolted and made the first ascent of Fado (8c/+) in Lehn.

Looking to the future Andy hopes to keep on progressing and staying injury free, as he has done throughout his climbing life. Although he has climbed a lot in France (and is a fluent French speaker) he is keen to travel more to some other climbing areas around the world.

Andy works as secondary teacher for maths, sport, science and art in Bern. He also provides some training for the regional cadre and dabbles in route setting. When he's not climbing Andy spends time with his girlfriend and enjoys nature, camping, hiking, cooking and art.