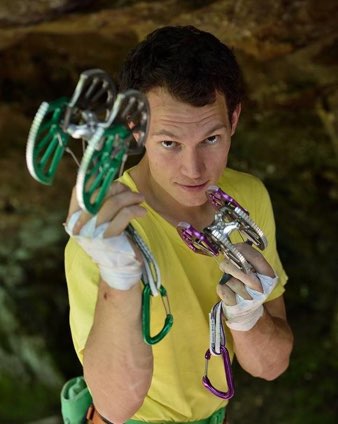 Recognised for his composure when headpointing top-end trad routes and for his sport climbing strength, Angus is a rising talent on the UK climbing scene. Driven by the challenges of climbing and a genuine love of the outdoors, Angus, who is a MIA-qualified outdoor instructor based in North Wales, has climbed several E9 trad routes, sport climbed 8c and has chosen to dedicate himself to a life of climbing.

“In the past few years I’ve immersed myself even more in the climbing world,” says Angus, “and found that I prefer it to the real world; those ‘moments of escape’ have become days or weeks of getting away from it all.”

Growing up in Wellington, Shropshire, Angus learned to climb on the soft sandstone of Nesscliffe after being introduced to climbing at 14.

“I was always climbing stuff as a kid—chairs, tables, trees etc.,” says Angus, “but when I was fourteen my parents decided I should go and have a session with a climbing instructor (this turned out to be Trevor Massiah, who I’ve started working for recently) and after spending half a day with him I realised I was a climber.”

Shortly after this first taste of climbing Angus received his first pair of climbing shoes and began “sketchy climbing with a mate from school”. The following year he led his first trad climb, Batman (HVS 5a) at Nesscliffe, which he describes again as “very sketchy”. His first 7a sport climb came in 2008 and the next month he met fellow Shropshire climber Ed Booth and the climbing legend Nick Dixon at Nesscliffe and “got really inspired”.

As it turns out, when Angus Kille gets inspired it means business, and within two years of this motivating encounter Angus was ticking E7 and E8 routes at Nesscliffe, including Tombola (E6/7 6c) and My Piano (E7/8 6c).

After finishing school in 2010 Angus took some time out from climbing to travel, heading to New Zealand via Southeast Asia. Upon his return to the UK, after two years of not climbing, he started working at a bouldering wall and applied himself to “climbing as an adult”, which he describes as a “big step forward”. It didn't take long for Angus to get back into climbing shape and in early 2014, which turned out to be a big year for Angus in terms of climbing milestones, he sent his first 8a, Anabolica, in Siurrana. This was shortly followed by summer ascents of Right Wall (E5 6a) and Resurrection (E4 6a) on his first trip to Dinas Cromlech in North Wales, and Angus achieving his Summer Mountain Leader Award. A trip to Céüse was the push Angus needed to start putting climbing and travelling first and shortly after he set off to India for four months. In Hampi he sent his first 8A boulder The Middle Way.

“The Middle Way was a big one,” says Angus. “I would try it once a week in Hampi and inch my way closer. First of all the only thing I could do was jump for the first move and fall to ground slightly slower.”

In 2015 Angus fell off 1000 Setting Suns (E9 7a) at Nesscliffe. Despite a nasty fall Angus ticked his first E9 the following day: the bold and technical arête of Rare Lichen (E9 6c) at Clogwyn y Tarw in North Wales. His sport climbing was keeping stride with his trad and later that year, on a trip to Geyikbayiri, Turkey, he climbed his first 8b and flashed 8a.

In 2016 Angus moved to Llanberis, in Snowdonia, to work as an outdoor instructor and to immerse himself in the climbing scene. He quickly totted up routes, such as Lord of the Flies (E6 6a, onsight), Overlord (E8 6c) and his second E9, Gribin Wall Climb (E9 6c), where he messed up his sequence on the dangerous crux after the lead ropes got in the way.

“I chose to improvise instead of down-climbing,” says Angus, “which was a bit mad but a really memorable moment. After you finish the crux, you run it out to a ‘glory’ size 3 RP. On the picture, you can see that I didn’t place it—I was so relieved I just forgot!”

Early the following year Angus flashed his first 8a+, the Colonel, again in Geyikbayiri, before returning to summertime North Wales to tick more classics, including making the fourth ascent of Steve Mayer’s Nightmayer (E8 6c), which he climbed using someone else’s kit after a chance encounter with Nick Bullock at the base of the climb meant he could try the route on the last day of a good weather window. It was also in 2017 that Angus gained his Mountain Instructor Award, a big professional landmark after years of hard work.

Later that year, in the Frankenjura, Angus climbed his first two 8b+ routes and then onsighted numerous 8a routes, both in Geyikbayiri and in Chulilla, Spain. In March 2018 he reached new heights by sending Mind Control (8c) in Oliana, which he described as the culmination of three winters of sport climbing.

“Indian Face is not the hardest trad route in Britain but it’s perhaps the most infamous”, wrote Angus in his article on Evening Sends. “It was the UK’s first E9 and the wildest thing I had heard of when someone described it to me at the age of fourteen. Failure on the route, an insecure 150-foot face climb with barely anything to protect it, is thought to be fatal, although no one has yet taken the big fall. The notion of climbing something so outrageously bold just blew my little mind.”

Angus, who openly claims to have been infatuated by the route and unable to justify the risk climbing it posed, sent the route in July while Johnny Dawes and Nick Dixon, the first and second ascentionists, looked on.

Two months later Angus sent Leo Holding’s Trauma (E8/9 7a) on Dinas Mot, in the Llanberis Pass. On Angus’ first multipitch excursion in 2008, he and a friend climbed past Trauma and the route quickly became Angus’ definitive image of hard climbing in The Pass.

“Working in a climbing shop back in Shropshire I kept putting on the DVD of Committed to see James Pearson and Dave MacLeod climbing it,” wrote Angus in his DMM article on his ascent. “Sometimes it's your climbing heroes that make a route what it is, sometimes it's the iconic venue or often just the moves. This route has all of that.”

Being driven by both climbing and travel Angus is increasingly drawn to bigger challenges overseas. A big wall new routing trip to uncharted terrain in Brazil with James Taylor, Twid Turner, Steve Long and Rob Johnson in spring 2018 was ultimately unsuccessful in terms of establishing a new route—the team ran short of time and gear only a few pitches shy of the summit—but gave Angus important insight into big wall first ascents and helped shape his goals for the coming years.

As well as climbing, Angus enjoys reading and is an excellent writer. He is also a capable paraglider—although he is too obsessed with climbing nowadays to find time to fly—and is really interested in good quality chocolate.