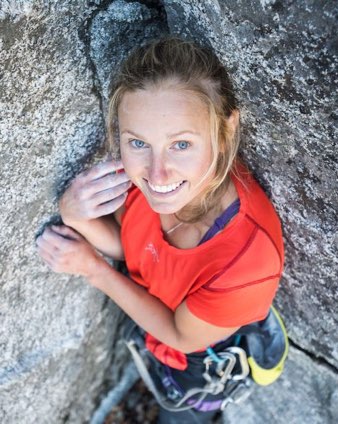 Brette Harrington is an all-round mountain athlete. An expert on skis, rock and mixed terrain she is a master trad climber, free soloist and alpinist. Increasingly known for her impressive mountain first ascents, Brette is a member of a cohort of young athletes at the top of the game in several climbing disciplines. So much so, she was named one of the top women to watch in sport by Forbes Magazine in 2017.

Born in California in 1992, Brette grew up on the shores of Lake Tahoe in the Sierra Nevada Mountains. With her skier parents, Brette was on the slopes at the age of two and started competing in slalom skiing aged five. In 2008 Brette moved to New Hampshire to attend boarding school and joined the school climbing team through which she started to climb both outdoors at New Hampshire crags like Catherdral Ledges, White Horse and Rumney, and to compete indoors.

In 2010 Brette enrolled at the University of British Columbia in Vancouver. Initially, Brette continued to ski competitively but following an accident in which she broke her neck when she was 20 she decided to shift her attention to backcountry skiing and climbing around Squamish. It was during her years in Squamish that her climbing skyrocketed.

“I lived in Squamish and commuted to Vancouver for school,” says Brette. “During this time I climbed as much as possible around Squamish, then Marc-André and I would go alpine climbing on weekends. Through alpine climbing I learned about soloing. Together the two of us soloed many mountains. We also went on separate solo adventures, but would meet at the summit, or back at the base afterwards. After learning more about the soloing headspace from mountain climbing I eased into free soling on the Chief and around Squamish”.

The summer before she graduated Brette demonstrated her climbing finesse on technical and committing lines around Squamish, including the second female ascent of the The Shadow (5.13a) and the first ascent of the mixed line Vanguardia (5.12+). She also made short work of multi- and single-pitch trad test pieces in the U.S., such as Silverback (5.12+) in Zion, Astroman (5.11c) in Yosemite, The Optimator (5.13b) in Indian Creek and Solar Flare (5.12d) on the Incredible Hulk.

After graduating in December 2014 Brette travelled to Patagonia for the first time and in February 2015, aged 23, leapt to climbing stardom by making the first ever free solo of the 760-metre 5.11a route Chiaro de Luna on Saint Exupery in the Fitz Roy Massif. After climbing the route once with her partner, the late Canadian alpinist Marc-André Leclerc, Brette soloed the route’s 20 pitches in three hours becoming the first woman to solo any route on the Fitz Roy Massif and gaining international notoriety as a climber.

Later that year, back in the U.S., Brette claimed the third ever ascent and first female ascent of Edge of Pan (5.13b R) in Squamish, made the second female ascent of Grand Illusion (5.13b/c) at Sugarloaf, California, and made an all-free team ascent of the 33-pitch Muir Wall (5.13c) in Yosemite, which she spent over a month working with Leclerc and British climber Alan Carne.

As well as ticking off established routes Brette was also always seeking out new routes both in North America and abroad.

“I first started establishing new routes in Squamish in 2013 when I joined my partner Marc-André on the Tantalus Wall to help him on a project,” says Brette. “[…] After that experience my eyes were keen on finding new lines.”

In summer 2016 the couple and friend Joshua Lavigne travelled to the eastern fjords of Baffin Island and over thirty days established two new lines on Great Sail Peak: the mixed aid/trad line Northwest Turret (5.13a A2, 22 pitches) and the West Buttress of Great Sail Peak (5.12 C1). Later the same year, over eight days, Brette and Leclerc established Hidden Dragon (5.12b, 11 pitches) on the formidable Chinese Puzzle Wall in the Nesakwatch River Valley, British Columbia and the following year they established Aurorophobia (5.13+) in the Wiaparous River Valley, Alberta.

In February 2017 Brette joined climber Mayan Smith-Gobat in Patagonia to attempt Smith-Gobat’s project of making the first free ascent of the big wall route Riders of the Storm on the Central Paine Tower.

“Mayan and I planned on free climbing Torre Central but when we arrived the face was entirely snowed up for the first two weeks making it impossible to free climb,” says Brette. “We realised our objective was not going to be possible so we changed our goals and expectations to fit the situation. Through our persistence and flexibility I learned more about technical mixed and winter climbing than I could have ever imagined. Although this was not what I had originally wanted from this trip it is was what I was given and I am so thankful for taking that opportunity”.

Brette’s winter climbing is as admirable as her rock climbing and she and Leclerc made numerous hard ascents in British Columbia, including the first winter ascent of Ledge Mountain’s north face via the Walter/Zenger summer line and, in early February 2018, the second ascent of The Theft (M7 WI6+, 240m) in the Bridge River area with Steve Janes.

In that same month Brette ticked her winter project: leading every pitch during a four-day first ascent of Jupiter Shift, a 200-metre M5+ on the north face of Station-D, near Mount Slesse in British Columbia with Leclerc.

As 2018 progressed Brette continued to undertake exciting projects and established numerous new routes in British Columbia and Alaska, the first being Life Compass (IV 5.10a M4+) on Mount Blane, which she established with Rose Pearson and dedicated to Leclerc who was lost in an avalanche, along with fellow alpinist Ryan Johnson, the month prior after completing a new route in the Mendenhall Towers, near Jeneau, Alaska.

“Life Compass was like a gift to me during the very deepest low of my life, the month after Marc-André’s passing,” says Brette. “During that time I needed to escape into the alpine and climb something big. It was a great adventure with a great partner.”

In June Brette went on to establish two routes and a ski descent in Alaska with Swiss alpinist Caro North, with whom she has climbed in the U.S. and Patagonia: a 500-meter 5.10b M5+ route on Southern Duke Tower in the Jeneua Ice Field and a five-pitch 5.10+ on the west face of the Taku Towers.

A few months later Brette returned to Jeneau with Gabe Hayden to make the first ascent of a line she spotted during her June trip with North on the West Face of the Devil’s Paw. The pair named the 1300-metre 5.11a route Shaa Téix’i, meaning Heart of the Mountain.

In her spare time Brette likes to read, write, do yoga, run, surf and play tennis, although the mountains will always take priority for the adventure they hold.