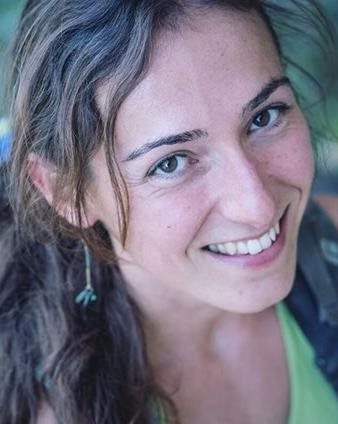 Carole is one of the highest performing French sport climbers, having climbed multiple routes of grade 8c and 8c+. Aside from being a top climber, she is also heavily involved in protecting climbing sites through Greenspits—a charitable organisation of which she is president—and has bolted about twenty routes throughout France and Spain. If that’s not enough she is also juggling hard sport climbing, bolting and charitable work with her job in midwifery.

Born on Reunion Island, in the Indian Ocean, Carole started climbing at the age of 12 and quickly started training and competing with the “Climbing First” club. Climbing was intuitive to her and she improved quickly, reaching second place in the French Schools Championship in her second year of climbing.

“I was probably as physically as strong as I am right now,” says Carole, “but my mental [game] was bad.”

At 18 Carole moved to Montpellier, France, to undertake the competitive entry exams to study midwifery at university.

“While studying to become a midwife I had to take a two-year break from the sport in order to pass the first year of medical school,” says Carole. “I then began climbing again, this time outdoors on the rock of southern France.”

After passing her entrance exams Carole focused her attention on climbing outdoors and her performance skyrocketed. In 2014 she climbed several 8bs and then her first 8b+, Aimar, in Oñate, Spain, in early 2015. This was quickly followed by her first 8c, the 50m-traverse Spanish Caravan, at the Ramirole in the Verdon in August.

“[Spanish Caravan was] the first 8c that I tried, and perhaps the route that opened the floodgates and inspired me to try other impressive and legendary projects,” says Carole. “It is an immense traverse on a 50° overhanging wall with very physical movements in an exposed, aerial atmosphere suspended over the Verdon.”

Carole didn’t stop there, and before 2015 was over she had climbed her first 8c+, the imposing 50m arête, La Rubia, in Villanueva del Rosario, Spain.

“[La Rubia] made its mark on me because I don’t know if I will ever be able to climb another route as beautiful!” says Carole. “I fell in love with this 50m diagonal journey through grey and orange tufas in the Chilam Balam cave. This was my first 8c+ and it look me 15 days of hard work to finally clip the chains.”

In June 2016 she made two more 8c ascents: Sex After Climb in Otiñar, Spain and La Pas Si Sage Femme at Ramirole in France. A few years later, in January 2019 came another, Guère d’Usure at Claret, France.

But don’t be fooled, the intervening years were not without considerable success, as Carole climbed a number of eighth-grade routes, including—but not limited to!—C.T.N. (8b) in Buoux, Lou Merzeou (8b+) at La Saume, Twin Power (8b+) in  Ramirole and Transworld Depravity (8b+) in the Red River Gorge.

“My personal investment in my own progression is focused on regular outdoor sport climbing rather than a vigorous training regime,” says Carole. “I am always on the look out for good energy and I try to give everything I’ve got every time I climb. Overcoming both my physical and mental limits is for me the best way to progress, both physically and technically. I do not impose any barriers on my projects - If I like the look of a route, I'll put quickdraws on it!”

After 15 years of climbing Carole is now focused on sharing her experience with others and in promoting good preservation ethics at crags. She is currently the principal editor and president of Greenspits.

Greenspits, a charitable organisation created in 2015, is focussed on the preservation of climbing sites by addressing environmental and access issues and promoting responsible use of climbing areas. The organisation does this through events, including conferences, workshops, clean-up days, re-bolting efforts, crag-maintenance programs, and by creating videos promoting good practice at crags.

“I have always been involved in the development of our sport because I realise that the continuity and popularity of climbing in the natural environment is due to the investment of climbers who go above and beyond the usual patterns of simple consumption,” says Carole.

Carole currently lives in Cadenet, a pretty village in Luberon:

“Cadenet is the perfect place to settle down for a climber,” says Carole. “It’s really close to climbing areas like Buoux or Lourmarin [and] you can reach St Léger-du-Ventoux, Céüse, Les Calanques, Montpellier and Nice Crags in less than 2 hours.”

“I’m also interested by philosophy and spirituality,” says Carole. “Climbing is for me the best way I found to train my mental strength or letting go. I would like to develop even  more my skills in this field and share it with others climbers in events, workshops or just at the bottom of the crag… mental commitment is for myself the key to perform in sport climbing!”