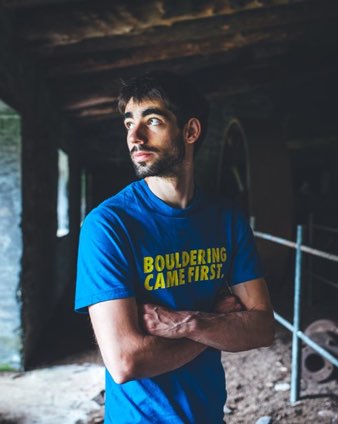 Ignacio is fanatical about climbing and route development. The Spaniard averages an incredible 235 days of outdoor rock climbing a year, using real rock as his training ground. And with sport ascents up to 9a, 8c trad climbs and 8C boulders under his belt, he is evidence that you don't have to spend time training on plastic to climb hard.

Ignacio was born in Madrid and introduced to climbing at a climbing wall when he started university at 18 years old. He was instantly addicted and soon found it hard to balance studying with his drive to get outside on rock.

“Every time I was going to climb, I wanted to go more and more,” says Ignacio. “That made university and climbing incompatible, and of course I chose climbing.”

Only a year after he started climbing Ignacio broke into eigth-grade sport routes. Rapid progression followed and soon Ignacio was ticking routes up to 8c+ and bouldering up to 8B+. In August 2015 Ignacio climbed his first 9a, making the first repeat of Pablo Barbero’s Clandestino at Teverga, Asturias. Just six months later he climbed his first 8C boulder, Nacho Sanchez's Entropía, at Castillo de Bayuela.

Ignacio is also a slab aficionado and has made a number of jaw-droppingly impressive ascents of technical slabs, including Pata 6 Baldosas, Inuït and El Tragador Oficial, all 8b+. In April 2017 he made the first ascent of Territorio Comanche in La Pedriza, which he graded at 8c+. Involving a total of 35 metres of tenuous granite climbing on gear and bolts, Territorio Comanche starts with a section of 7c+ climbing with no handholds, followed by a boulder problem through a roof before a desperate upper slab, and is certainly one of the most difficult slab climbs in the world.

Shortly after his successful redpoint of Territorio Comanche Igncaio saw the video of James McHaffie climbing Meltdown, in the Dinorwig slate quarries, and says that instantly “it was like an obsession to want to go do it”.

A short visit to North Wales in 2017 solidified the obsession, as Ignacio got to try the moves on Meltdown with James McHaffie and Jonny Dawes. In May 2018 he returned for ten days to work the route, but bad weather limited his time on the rock. Nevertheless, by the end of his trip Ignacio was just a few moves away from sending the line and decided to miss his flight while his climbing partner flew home. The decision paid off and after a few days Ignacio found a belayer and made the second ascent of this extremely technical 8c+/9a line.

“The truth is that the movements [on Meltdown] are very crazy,” says Ignacio. “You have to have a lot of imagination to understand the sequence. I had it easy because this work was already done by Caff and Johnny and I used almost the same sequences that appear in Caff’s video.”

Back home in Spain Ignacio had also started free climbing classic aid routes from the late 1960s and early 1970s at La Pedriza, resulting in seriously high-end free ascents up to 8c in difficulty, including Lucas (8c), Techo Peña Blanca (8b+/c), Francisco Prieto (8b+), Biafra (8b) and Garaje Hermético (8b).

As a prolific route developer Ignacio is constantly seeking out hard new routes and boulders, particularly at his local climbing area of La Pedriza, but also further afield in Albarracin and in Rocklands, South Africa. In recognition of his contributions to Spanish climbing, including his free trad ascents and slab climbs, Ignacio was awarded prizes by the Spanish and Madrid Climbing Federations in both 2016 and 2017.

“I'm always thinking about climbing things,” say Ignacio. “When I'm not climbing I like to go and look, equip new routes and blocs and maybe one or two days a month, if I like to be calm, belay a friend.”

“The truth is that it is a very simple question but very difficult to answer,” says Ignacio when asked why he is driven to climb. “I don't know why I climb. I only know that I do it and I can only think about it. There is nothing rational about it and it is a kind of madness. Maybe I should go to the doctor.”