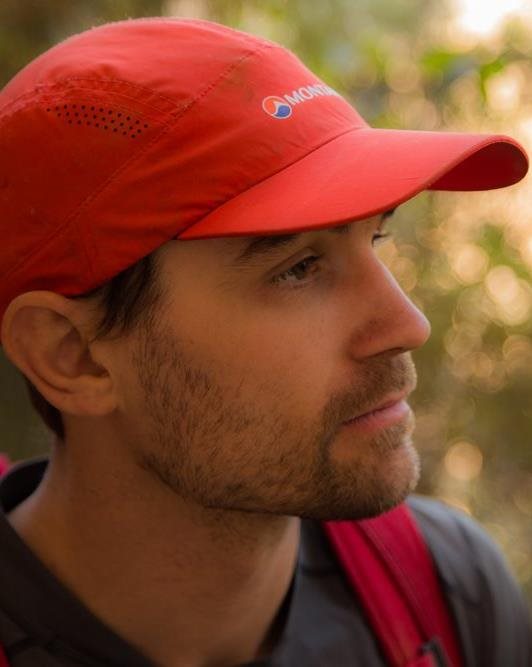 Jesse is a blind climber, suffering from a genetic defect which has affected his eyes since birth. He is best known for his trad climbing, having on-sighted E2 as well as iconic British test pieces such as The Old Man of Hoy and The Sloth, coining the phrase "non-sight" to describe the style of his ascents. He has winter alpine first ascents in Greenland to his name as well as leading ice routes. Jesse is part of the GB paraclimbing team, British champion in his category and currently ranked 4th globally in IFSC competitions.

Jesse suffers from the genetic condition rod-cone dystrophy, as well as astigmatism and cataracts. As a child Jesse had approximately 20% central vision and his sight continued to decline into adulthood.

His blindness has never been an obstacle to his climbing however and Jesse has three decades' worth of climbing under his belt since being introduced to the sport by his father at the age of two. A childhood of trad climbing throughout the UK and bouldering in Fontainebleau, France, led to Jesse completing his first trad lead aged 11, by which time his sight was limited to about 20% blurry central vision and no peripheral vision.

Upon leaving home Jesse headed to the University of Bath to study for a four-year Master’s degree in Chemistry and joined the Mountaineering Club, continuing his love-affair with climbing every weekend and evening that weather and study allowed. During university his sight began to deteriorate more rapidly and by the time he was studying for his Ph.D. in materials chemistry he could no longer read.

“It began to be difficult to place gear as I could no longer see whether it was properly seated,” says Jesse. “I also stopped being able to pick out the holds at indoor walls. However this didn’t stop me climbing, I just learnt to adapt with the support of my friends.”

It was during his time in Bath that he met Molly Thompson, his partner both in climbing and life. Molly acts as Jesse’s sight guide when climbing and the pair have climbed in some extraordinary places together.

“Molly supports me by acting as my sight-guide, which means she helps me to find the holds when I'm climbing,” says Jesse. “She will call out instructions to me based on what she can see. This is really quite obvious for indoor climbing at the wall, but her experience and skill really shows itself when we climb outside. She will look at the route and work out where she thinks the critical holds and gear placements are and then direct me to these as I'm climbing up (assuming she can see them/me). I will then use whatever holds I think are best, usually these are the ones Molly spots for me, but obviously sometimes there are hidden holds or you just can't tell which is the ‘good bit’ by looking at it from the ground.”

“Often the climbing isn't the whole story, guiding a blind man over the approach is also tricky,” Jesse continues. “Imagine trying to tell a blind person where to put their feet/hands as you cross a boulder field on an approach!”

In short Molly is critical to Jesse’s climbing:

“We are a team and work amazingly together,” says Jesse. “It is always a joint effort to work out the most effective way to solve each problem. Molly is excellent at route reading and coaching me, she is a strong climber in her own right and couldn't be nearly as good a guide for me if this was not the case.”

In 2017 Jesse and Molly joined a four-week climbing and skiing expedition to the Stauning Alps in a remote part of Greenland, involving at 100km circular ski route in temperatures that reached -28oC. On the expedition Jesse became the first known visually impaired person to complete first ascents in the Arctic when the team established Katalice (1,100m, AD) on Boughfell and Sequoia Spire Route (800m, PD) on Sue’s Spire, both in alpine style. During the trip the team also repeated measurements of the Roslin Glacier and installed a network of ablation stakes to observe the impacts of climate change.

Some of Jesse’s trad on-sight leads include stiff gritstone classics like Flying Buttress Direct (E1 5b) at Stanage, Sloth (HVS 5a) at The Roaches and Great Western (HVS 5a) at Almscliff, as well as multi-pitch test pieces like the five-pitch Copper Dragon (E1 5b) at Great How Crag in the Lake District. He has also led up to AD+ on the Grand Fourche in Chamonix, ice climbed up to WI5 (single pitch) and led sport climbs up to 6c and seconded 7a.

In June 2019 Jesse completed his most adventurous trad climb to date: the classic East Face Route (E1 5b) on the Old Man of Hoy in Scotland. Guided by Molly, Jesse led all six pitches on-sight, so to speak, and placed all his own gear on lead.

For many of these expeditions and adventurous climbing trips, Jesse says that the hardest part is foreseeing the difficulties and working out the solutions ahead of time.

“For Hoy we spent a reasonable amount of time reading different route descriptions to try and work out if Molly would be able to see me for the traverse section,” says Jesse. “I can climb unaided, but obviously it is much harder for me so I am more likely to come off if the difficulty is near my limit. If it's easy for me I can just hold on and feel around until I work it out for myself. On Hoy Molly couldn't see me for the crux, but that didn't really matter, as it was a jamming section.”

Having completed this adventurous challenge, Jesse now has a few other E1 trad routes on his wish list, including Cenotaph Corner and Cemetery Gates in North Wales, and wants to break into leading E2 (“I've got my eye on a couple I think would be good for me”). Ice climbing and more first ascents are also on the cards.

“I'd love to get some first ascents in Antarctica,” says Jesse. “I think I'm the first blind person with FA's in the Arctic, it would be great to complete the set.”

2019 was equally successful, with Jesse winning Blocfest, coming second at the World Paraclimbing Masters in Imst and 4th in the World Championships in Briançon. Currently Jesse has absolutely minimal light perception in an extremely restricted field of vision and so competes blindfolded in the Visually Impaired category, B1.

Jesse lives in Loughborough and works full-time as a Senior Patent Engineer for a clean-energy technology company that makes hydrogen fuel cells. When he’s not climbing or training he enjoys Brazilian Ju Jitsu.

“It's a sport where not being able to see isn't as much as a disadvantage as for other sports,” says Jesse. “BJJ and climbing complement each other quite well, the grip strength and core stability are applicable to both. Unfortunately I don't have time to train BJJ anymore, just not enough hours in the day.”