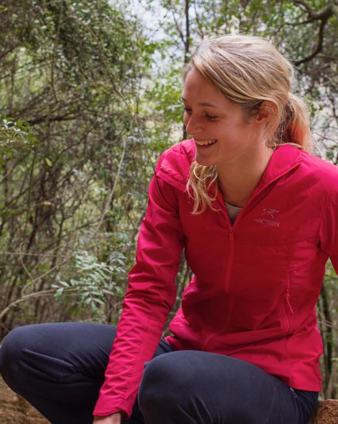 Katy Whittaker is one of the UK's top female climbers. She has excelled in a number of different climbing disciplines, from indoor competitions, to bold grit routes and hard sport lines.

“I like climbing best where you have to think and use technique and balance rather than your arms,” says Katy. “I also love big days out in the mountains, testing your ability to just keep going. Not necessarily hard climbing but long days where you come back to the campsite totally done in. In America I enjoyed the epics and suffering in a weird way, they have more of an impact/ lasting memory on me than say sending a hard boulder/sport climb.”

Katy was born in Burnley, but grew up in Edale in the Peak District. Her introduction to the outdoor life came early with an abundance of family holidays focussed upon walking, scrambling and climbing.

Katy did her first lead on an indoor wall at the age of eight and started doing BRYCCS competitions a few years later. She got onto the junior team aged 12. Competitions suited her and she kept a place in the British Team for most of the following decade, taking regular podium positions along the way.

In 2007, her first year as a senior competitor, she won the British Bouldering Championship.

“That was pretty cool,” says Katy. “It definitely put a big smile on my face and made all the hard work and stress of comps seem worthwhile.”

Katy continued to compete in the Boulder World Cups on and off but could never really fully commit to indoor climbing, saying “Training on perfect grit days didn’t make any sense.”

Her love for climbing on real rock snowballed after a course at Plas y Brenin in North Wales.

“I went on a trad climbing course with my brother (Pete) when I was about 13,” says Katy, “and then just did a load of mileage in the lower grades whilst we were younger.”

A combination of family support and sibling rivalry encouraged Katy to make quick progress, but the big push came when she started working with Dave Binney, the British Team coach:

“He taught us the fundamentals when we were quite young but made it fun,” Katy reminisces. “He then taught me how to train and wrote me training plans for a good few years whilst I was competing as a junior.”

An important early ascent on the grit was triggered by the news that her brother had just climbed his first E6.

“That was a big eye opener,” says Katy. “I had never even considered or thought E6 was possible. Encouraged by Pete I went out and headpointed Life Assurance [an E6 6b at Burbage South]. This was the start of my love for grit, I think. I have obviously climbed it all my life but climbing hard techy smeary stuff was fun and you didn’t need to be strong!”

Katy went on to climb a succession of gritstone test pieces; a major highlight was Braille Trail (E7 6c) at Burbage South.

“I love the name and how well it relates to the climb,” says Katy. “I found this the hardest and scariest out of all the E7s I have done as the gear is so weird and it is so easy for your feet to pop!”

Her ascent of Masters Edge (E7 6b/c) on Millstone Edge was also a big deal that felt at her limit at the time. The emerging style on gritstone was for ground-up ascents done above bouldering pads, essentially turning some of the shorter gritstone routes into highball boulder problems, albeit rather scary ones! This marked a step away from the ‘Hard Grit’ headpointing style and Katy embraced it whole-heartedly. Soon enough she was ticking off ground-up ascents of established classics, such as Desperate Dan (E6 6b) at Ilkey, Narcissus (E6 6b) and The Mint 400 (E6 6b) at Froggatt. One of her proudest moments was a flash ascent of Shirley’s Shining Temple, John Allen’s ultra technical E5 7a at Stanage.

A trip to Black Rocks saw more impressive ground-up action. Katy followed an ascent of Jumping on a Beetle (E7 6c) with success on its harder neighbour, The Angel’s Share. This faith in friction challenge was originally given E8 7a by Johnny Dawes, but with bouldering pads highball Font 7C is more appropriate. Regardless of the grade, Katy’s ground-up ascent showed off her exceptional slab climbing skills and cool head.

Another important ground-up ascent, done in March 2013, was Toy Boy, a desperate E7 7a at Froggatt first climbed by Ron Fawcett.

“This took me the longest out of all my grit ascents,” says Katy. “It’s edgy, not smeary, so I found it hard and had to work hard to figure it out.”

During the autumn months of 2013 Katy continued to pick off a series of difficult and bold gritstone headpoints. First to fall were The Bad and the Beautiful (E7 6b) at Millstone and Paralogism (E7 6b/c) at the Roaches. Both these routes were confidence boosters for what came next: Gaia (E8 6c) at Black Rocks. A couple of sessions on it earlier in the year meant that she was more than ready for it, and on the day, despite getting worryingly pumped placing the gear, the ascent went smoothly on first lead attempt.

Next on the grit hit list was Knockin on Heaven’s Door E8 6c at Curbar. This ascent followed a similar pattern: two preparation sessions then a successful first lead attempt on the third day. The route is considered hard for the grade and Katy’s lead was the first by a woman.

Katy is also keen on sport climbing. She climbed her first 8a at the age of 18 and then went on to climb various eighth grade routes, including Chimes of Freedom (8a+) at Raven Tor and Love Amongst the Butterflies (8b) in Cheedale. In March 2014 she became the fourth British woman to climb 8b+ when she redpointed the 35m endurance route China Crisis at Oliana in Catalunya.

Returning home Katy spent the rest of the spring attempting the classic test piece Mecca (8b+) at Raven Tor. She got close but deteriorating conditions forced her to postpone further attempts until the end of August. After another sustained effort the successful redpoint eventually came in October. Katy was the second woman to have climbed Mecca, following Mina Leslie-Wujastyk's ascent in 2012.

As for travelling, she has spent time in the US, climbing in Tuolumne Meadows, Yosemite Valley, Joshua Tree, the High Sierra and Bishop. Highlights included Positive Vibrations (5.11a) on the Incredible Hulk:

“I thought the Incredible Hulk in the High Sierra was awesome and I loved the bouldering in Bishop, although it does trash your skin!”

In Europe Katy has climbed a lot in Spain and has had a few trips to the Frankenjura, Céüse and Magic Wood. One of her favourite places is Skye in Scotland where she recently did the Cuillin Ridge with her parents, describing it as “such a hard 18 hours!”

In 2012 Katy graduated from Hallam University in Sheffield with a First Class degree in Graphic Design. She currently lives in llanberis with her husband Alex and their baby Pippa.