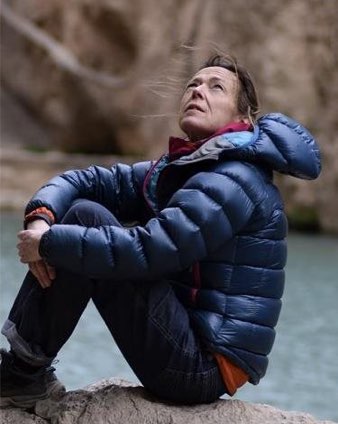 Libby is one of the most respected climbing improvement gurus in the UK. She writes regular articles for the climbing press and is the author of Rock Climbing, Essential Skills & Techniques - the official handbook of the Single Pitch and Mountaineering Instructor Awards. She is also part of a select elite of British climbers who have qualified as International Mountain Guides, and Libby was the first woman to do so.

Rock climbing and mountaineering have played a central role in Libby's life. She has climbed all over the world, sampling all aspects of climbing from bouldering to high-altitude mountaineering and everything in between.

Libby grew up in Cornwall, and then later, Bristol. (Strange fact: she went to the same school as Lucy Creamer!)

“I vividly remember my mum once dragging us out of bed and up a hill to watch the sun come up, it was very special; every alpine sunrise still reminds me of her. Climbing started in the Avon Gorge as preparation for going on a British Schools Exploring Society expedition, I loved just being in the mountains then but started climbing properly as a student.”

In 1985 a fall from Us, a relatively obscure E2 in Avon Gorge, brought about a shift in Libby’s attitude to hard climbing: “I realised that runners do work, and even though I sprained my ankle in the fall I discovered I loved pushing myself.”

A trip to Chamonix in the same year cemented her connection with the mountaineering lifestyle.

“I did a ‘six weeks on 50 quid’ type of trip; no uplift, no huts, etc; must have been so fit! Did classic alpine stuff, nothing hard but all memorable in that novice, totally clueless kind of way.”

After that first trip to the alps Libby was hooked and spent as much time as possible in the mountains. She worked as an instructor in the UK and gained the ML, MIA and MIC awards before deciding to become a Guide.

In 1990 Libby lead her first E3, Edgehog in Glen Nevis (even though it was actually given E4 at the time) :“This was my first time on a bold route. I realised then that I loved the feeling of being high above runners. I still often climb better once there’s no option of any more gear so you just have to get on with it.”

Libby continued to pick off classic mid-grade extremes throughout the nineties and noughties. In 2005 Libby was still improving; during one remarkable week she broke through into the E5 grade with an onsight ascent of Right Wall (E5 6a) on Dinas Cromlech, followed by Warpath (E5 6a) at Rhoscolyn, Run Fast, Run Free (E5 6a) at Gogarth and The Axe (E4 6a) on Cloggy.

“It suddenly all came together and gave me hope that it wasn’t all slipping away. I was climbing a lot with Nick (Bullock) at the time and he just believed in me and encouraged me to get on with it.”

More recent highlights have included taking a big lob off King Wad (E5 6b) in 2010 and onsighting the alarmingly bold Byzantium (E4/5 6a) at Craig Dorys: “This was virtually off-the-couch so was a proper psyche up. Again it was with Nick and he was – ‘yeah, you’ll be fine’, but I was halfway up with really poor gear not sure if I was up to it. A couple of times I rested my head against the rock, breathed hard and wished I was somewhere else!”

During the nineties Libby climbed a number of big wall routes. Her first proper big one was The Nose, El Cap, Yosemite in 1992: “I did it with friend Kathy Murphy who’s also a guide. We were so hopeless at aid climbing, hauling and crack climbing that the whole thing felt well ’ard, but we had such a laugh. The following year Lynn Hill freed it and I was just blown away.”

Other stand out routes were the Lotus Flower Tower in the Cirque of the Unclimbables in 1995 and in 1998 the first ascent of Ramchikor, a 650m E3 A2 on Sotal Pa Peak, Nangma Valley, Pakistan.

“It was such a happy trip with good friend Louise Thomas," says Libby. "We were climbing in the sun on perfect granite in this wild place—amazing.”

Libby is a keen winter climber and living in North Wales leaves her perfectly poised to grab the big routes when they come into condition. In 2004 she climbed Devil’s Appendix (VI 6) on Clogwyn y Geifr with Jude Spancken (this was Jude’s second ever ice climb!): “It was a sociable day (there’s always a queue) and I had to run off to make it back to the child-minder in time.”  In 2006 she joined Nick Bullock on the first ascent of Traversty (VIII 8) on Clogwyn Du.

These days Libby lives in Dinorwig (a mere stone’s throw from the slate quarries) with her two daughters, Zoe and Ruby. She runs Llanberis Guides with fellow mountain guide Ric Potter. Libby has also produced (in collaboration with Neil Gresham) Get Out on Rock, an instructional film—check out her personal website where you can buy a copy of this: www.libbypeterclimbing.co.uk.

“I guess the most significant ‘recent’ influence is having children. Logistically it’s far harder to contemplate longer trips to the bigger mountains now, but more importantly I just hate being anywhere dangerous, I have these ‘What am I doing here!?’ moments. Luckily I love rock climbing and there’s plenty of safe places to go for that!”