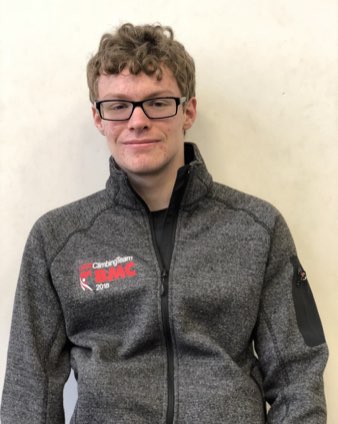 Matthew Phillips is one of the UK’s top paraclimbers and a World Champion to boot. During his first two years on the GB Paraclimbing Team Matthew took home five gold and two silver medals at IFSC World Paraclimbing Cup events and in 2018 became World Champion at the World Paraclimbing Championships in Innsbruck. At home in the UK he has claimed nine gold medals at top-end competitions, proving himself as a force to be reckoned with on the modern comp scene.

Matthew, who was born without his right lower arm, started climbing seriously when he was 14 after he grew bored with national competitive swimming. He entered his first paraclimbing competition in 2013 and placed top five, despite having had no formal training. This gave the teen the nudge necessary to start taking his climbing more seriously and in April 2015 he starting working with a professional coach.

In September the same year Matthew performed for a home crowd at the World Paraclimbing Cup in Sheffield and took gold once more. 2017 and 2018 were equally successful and Matthew took two golds and a silver medal at World Cups in Sheffield, Briançon and Edinburgh, respectively. Then, in September 2018 and in front of a buzzing crowd, Matthew headed off stiff competition to become World Champion at the World Championships in Innsbruck.

“This was an unbelievable experience,” says Matthew, “and the support from the crowd when I topped the final route was out of this world.”

Matthew, who is know for his dynamic style and daring leaps on the bouldering wall, also has an impressive outdoor record, including onsights of Poodle Traverse (Footless) (6C+) at Dinas Rocks and Toxic Shock (6b) at Cheddar Gorge, and sends of Chapeau Chinis (haute version) (7a) in Fontainebleau, Slopey Traverse (6B) at Bonehill, Green Travserse (7A) at Stanage and Mr Gymnasia (7a) in Portland.

“I find the climbing community extremely supportive and friendly,” says Matthew when asked why he is motivated to climb. “I have made some great friends from all over the world [and] I love the challenge each new route provides.”

Matthew is in his final year of school and is currently completing his A-Levels. In November 2018 he passed his CWI Qualification and started teaching at his two local climbing walls, sharing with others his passion and motivation for climbing.