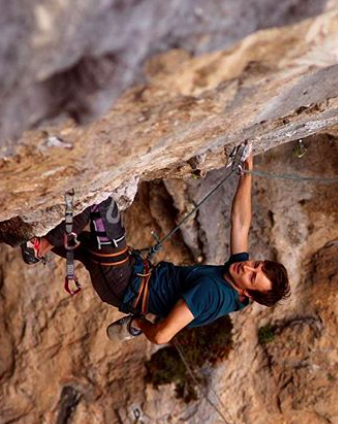 Oli Grounsell is a low-key and unassuming climber who doesn’t take climbing too seriously but still has one of the most impressive résumés around, including trad routes up to E9, sport routes up to 8c+ and boulders up to 8B.

Oli was first introduced to climbing when he was 10, at a party at The Edge climbing centre in Sheffield.

“I really enjoyed it,” says Oli, “so I started going indoors regularly.  After a few years I was introduced to the outdoors by my friend’s dad, Jon Cowley.”

Oli quickly started to ratchet up experience outdoors on the local Peak District grit and by the age of 16 had onsighted E5, his first route of that grade being White Wall at Millstone. Other impressive routes followed, including a flash of Masters of the Universe (E6/7 6b) and a smooth ascent of Offspring (E5 6b) at Burbage South, and an onsight (in the semi-darkness) of London Wall (E5 6a) and the second ascent of King Ellmore (E6 6a/b), both at Millstone the day before he turned 18.

Other notable ticks included Fat Slapper (E7 6c) at Eastwood Rocks, Shine On (E7 6c) and Wall of Sound (E6 6b) at Stanage and a flash of Cool Moon (E7 6c) at Curbar. Oli’s first E9 headpoint was the desperate and fingery The Zone (E9 6c) at Curbar, which he sent in early 2013, taking a number of falls onto skyhooks before his successful ascent.

In the autumn of 2013 Oli left Sheffield to study Sport Science at Bangor but he continued to make the most of climbing throughout his degree, building on his already notable list of trad, sport and highball bouldering ascents.

Shortly after arriving in North Wales Oli started ticking off hard boulders during the cold winter months, like Roctrocity (7C) and Hatchotrocity (8A), both at Parisella’s Cave. Once the warmer weather arrived he was out making the most of the trad scene, ticking routes like Heart of Stone (E7 6c) in the Ogwen Valley, Lord of the Flies (E6 6b) in the Llanberis Pass, the bold arête of Rare Lichen (E9 6c) on Gribbin Facet and making the second ascent of Night Stalker (HXS/E8) at Craig Dorys.

He also gave some attention to North Wales’ limestone, enjoying routes like Walking Mussel  (8b+) at Lower Pen Trwyn and The Brute (8b) at The Diamond. In 2015 Oli jumped two grades and climbed his first 8c+ with the fourth ascent of Megalopa at LPT.

“I think Megalopa was a good milestone for me, as I jumped from 8b+ to 8c+ and realised what you could do with a little persistence,” says Oli. “It was the first time I had properly got into the redpoint process.”

Later that year Oli put his sport climbing fitness to good use with an ascent of the infamous prow of Divided Years (E9 6c) in the Mourne Mountains. The following summer Oli added yet another E9 to his growing tally by making the third ascent of Mission Impossible (E9 7a), a Neil Carson route in the Ogwen Valley.

“I think Mission Impossible was perhaps one of my favourite routes due to a multitude of factors,” says Oli. “General aesthetics of the situation, big walk in, difficult to get in good condition, hard climbing on an inspiring wall. It just felt like a route that wasn’t easily given away, so was great to get done.”

In August 2016 after graduating from Bangor with a First Class degree, Oli travelled to Canada, sampling climbing in Squamish and the Bugaboos before travelling to Mexico where he climbed some big walls, including making the first free ascent of Pau (7c+, 15 pitches) on the Pico Tatewari with Liam Postlethwaite. Finally Oli landed in Australia, where he spent 2017 working random jobs—including a server in a doughnut shop and a door-to-door oil painting salesman—and enjoying climbing in the Grampians and in Tasmania. Some favourite routes from his time Down Under included Eye of the Tiger (29/8a) in the Grampians and the Totem Pole in Tasmania.

2018 for Oli began in China, sport climbing in Getu and then crack climbing in Liming. Highpoints were onsighting Another World (5.12d) and the 250-metre chimney/offwidth horror show The Lost World (5.11+). He returned to the UK psyched on sport climbing and subsequently climbed Bat Route (8c) at Malham, followed by Pati Noso (8c+) and 2x30 (8c) in Siurana in early 2019.

Oli works as a coach for Lattice Training developing personalised training plans for climbers around the world. He climbs for fun, the cool places and the people and, in his own words, “quite enjoys going to parties”.

You can follow Oli via his regularly updated blog.