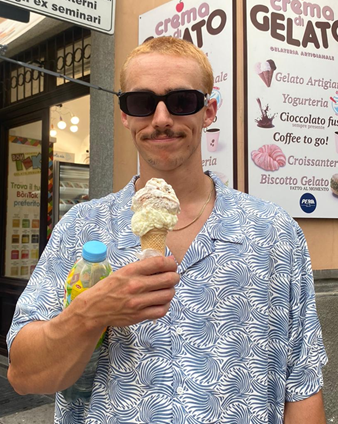 Obsessed with hard movement and highly motivated to reach his potential, Rhys Langlands is a young Scottish climber who lives and breathes climbing. Nurturing a passion for powerful bouldering, but with a capacity for hard sport climbs that many dream of, Rhys is certainly one to watch in the coming years.

Hailing from a climbing family, Rhys could be found swinging around on a rope and charging around the mats at the local Inverness climbing wall from just three years old. With an elder sister who climbed—and later two younger brothers—this became a standard childhood activity and at age nine Rhys competed in his first Youth Climbing Series competition. Over the next few years, frequent competitions and an introduction to real rock led to achievements inside and out, including sport climbs up to 7b+, boulders in the seventh-grade and competitions podium.

Rhys’ first jaw-dropping milestone, which landed him the front pages of UKC news, was his 2015 ascent of The Force (8b) at Brin Rock, south of Inverness, which he managed between regular competition commitments. In total, it took 14-year-old Rhys only five sessions to reach the chains of the notoriously steep and burly route, having had to rework his beta during his second session after a hold broke. Prior to this, his hardest sport route had been The Fear (7b+) at Moy Rock.

As if skipping a handful of grades and climbing your first 8b at 14 wasn’t enough, seven months later Rhys also ticked his first 8A boulder problem: Keyser Söze also at Brin Rock. It took Rhys only four attempts tackle the burly bulge and series of ratty crimps and ignited an internal drive to see what he was capable of in bouldering.

“I am obsessed with bouldering,” says Rhys, “and watch all the videos to feed on and consider myself a fan of bouldering even more so than a boulderer.”

Over the following years, while still attaining impressive competition results—including coming second in the British Boulder Championships in 2016 and becoming Youth Series Champion in 2018—and managing a lingering finger injury, Rhys ticked more eighth-grade Brin Rock boulders, including Keyser Söze – Left Exit (8A), The Saharan Wind (8A) and The Bullworker (8A+). Then, in April 2021, Rhys climbed his first 8B. Keen Roof at Raven Tor is a benchmark for the grade and took Rhys only two sessions.

“I always had imagined that breaking the plateau would be a siege over sessions and the best form of my life,” says Rhys. “However, sometimes you just need to be on the right bloc at the right time.”

Motivated by hard climbing and powerful movement, Rhys went on to repeat and develop some seriously high-end boulders, primary in the Scottish highlands, in what he describes as the best run of form of his climbing career so far. This includes his 8B bloc, Big Chief, which Rhys describes as his proudest ascent to date. The process of climbing Big Chief, a proud overhanging boulder at Brin Rock, took Rhys more than a year.

“The grade debate is tough to get right,” wrote Rhys on his Instagram. “However I feel due to the time it’s taken me to do plus having sent established boulder of similar difficulty and having a good run of form recently, it feels like 8B or quite possibly harder would 0noy be appropriate. It would be interesting for this to see a repeat from some fresh eyes, which may have a different opinion of grade, of which I’m open to and welcome.”

Following this impressive first ascent, Rhys repeated problems up to 8B+, including Zero (8B), Below Zero (8B+) and Phantom Limb (8A+) at Ruadha nan Eallachan, Monarch (8A+) and Side Hussle at Queen’s Wave, Sanction (8B) at Dubarton Rock, XXXX (8A) at the Bowderstone and Sean’s Roof (8A+) at Blackwell Dale.

A fruitful trip to Magic Wood in September 2022 reaped a bounty of hard problems, including Rhys’ hardest bloc abroad, Steppenwolf (8B), and hardest single-session ascent, High Spirit (8A+/B). Not bad for a first climbing trip abroad.

“I understand a lot of climbers are driven by adventure and the outdoors, of which I am also interested, but I thrive on difficult moves and hard climbing which is probably why bouldering intrigues me most,” says Rhys. “I can be motivated to climb on any material (rock, wood, resin etc) and in any environment as long as the climbing is difficult and aggressive.”

For Rhys, who has a Bachelors in Sport and Fitness from the University of the Highlands and Islands in Inverness and has worked as both a coach and a route setter, is currently focused completely on his climbing. With a determined mindset and aspirations to climb 8C+, we foresee exciting things ahead for this young Scot.