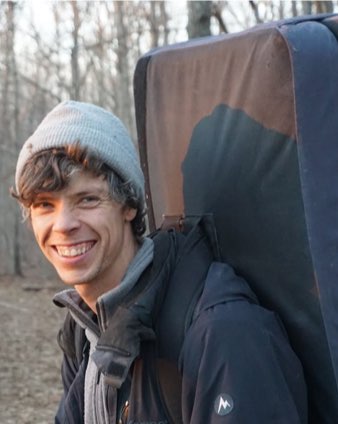 Belfast-based Ricky Bell has been the undisputed star of the Irish climbing scene since he broke through in the mid-noughties. He has dabbled with most climbing styles but is a trad climber at heart and his track record of over sixty repeats and first ascents in Ireland of routes graded E7 to E9 shows this in spades.

Ricky started climbing in 1994, having already been inducted into an adventurous lifestyle by his mum and dad. Family holidays consisted of camping trips ("a Ford Seirra, a little trailer tent and wee black dog") to some of Britain and Ireland's best climbing locations, namely North Wales, Scotland, the Lakes and the Peak. Closer to home Fair Head, the Mourne Mountains and The Burren became regular destinations and Ricky led his first trad route, Crooked Chimney (HS) in the Mournes when he was 11.

“I was lucky to have had a good apprenticeship early on,” says Ricky. “I went climbing with my family, and that's the best way to start. My mum used to give me beta all the time for the routes she could remember leading. Looking back on this now I think it's lovely.”

As Ricky got older he was taken under the wing of some of the big faces in the Irish climbing scene:

“Phil Holmes took me up harder routes and taught me some valuable skills,” remembers Ricky. “Ali Moles and Ron Browner encouraged me onto the harder routes. With these two I onsighted my first E5 and clipped my first 8a.”

While some of his peers (Si Moore, for example) left Ireland, tempted by the Pennine crags and training facilities of Sheffield, Ricky stayed in Belfast and studied Engineering at university. Any spare time was spent exploring the delights of Fair Head and the Mournes.

During the following years Ricky became ever more absorbed in hard trad climbing, exploration of new lines and building relationships within the climbing community.

“I'd met one of my best friends, Craig Hiller, photographer and fellow rock cleaner, and we found an amazing partnership in our love for running around the Mournes finding new lines and listening to electronic music,” says Ricky.

Divided Years, John Dunne’s remarkable route on Buzzard’s Roost in the Mournes remained the biggest challenge. Ricky saw the line when he first started climbing and had vowed to himself that he would climb it one day. At that time Dave Birkett and Dave McLeod had repeated the route but no Irishman had done the deed. In 2008, and after some epic, sweeping falls, Ricky became the “first Guinness drinker”, as he puts it, to climb the route. Originally given E10, the route has now settled to E8, but regardless of the grade it remains a major highpoint in Ricky’s climbing life.

In the following years Ricky continued to pick off extraordinary first ascents. Highlights included The Big Skin (E8 6c) at Fair Head, The Thing in the Forest (E7 6c) in the Cooley Mountains, (which he did ground up), and Sleazy Lover (E8 6c) on the spectacular East Face of Lower Cove in the Mournes.

In 2011 Ricky produced his finest new route when he succeeded on the magnificent prow of the Rathlin Wall at Fair Head: The Rathlin Effect (E8 6c):

“It's probably the hardest, and in my biased opinion, the best route in the country,” says Ricky. “It took about six sessions to actually find the line and clean it before I could climb on it. It runs through some really steep terrain so I had to aid climb the bottom section and clean it that way."

Ricky has travelled widely and climbed at many high-profile venues in France, Spain, Italy, Switzerland, Sweden, Canada and the U.S. and lists number of classic trad routes in America as holding the finest memories for him. That list includes Positive Vibrations (5.11c) on the Incredible Hulk in the High Sierra and various Yosemite routes, such as The Alien (5.12b), The Bachar/Yerian (5.11c X), Astroman (5.11c), The Regular North West Face of Half Dome (5.12a) and The Nose on El Capitan.

Ricky is also a keen boulderer and has visited Fontainebleau almost every year since he was 16. Back home in Ireland he has made numerous first ascents on the impressive Fair Head boulders, such as Carbide (7A) and Just Chew It (7C), and then, in 2012, the big, steep arête of Spindle (8A).

During 2013 Ricky was dogged by a bad finger injury but over the following winter he clawed his way back to full strength. Subsequently, 2014 featured some very exciting exploration and development that resulted in a number of excellent first ascents. Highlights included An Empty Book (E7/8 6b), an impressive corner feature at Fair Head, and The Big Black (E7 6c), a bold arête line in the boulders below the Fair Head crag. At the nearby Potato Cave in Cushendun he climbed an epic bouldering traverse line, La Potato Potato (8b), while at Spellack he made the first ascent of the blank and desperate Peace Donkey (E7 6c/7a).

There was time for some classic big routes, too. During a trip to Red Rocks, Nevada, he climbed the superb Rainbow Wall (5.12a) with his old friend Si Moore and did the West Face of El Cap (5.11c) in Yosemite.

2015 was equally productive with Ricky making the first ascent of Buddha Sits (8B) in the Cooley Mountains and The Gentleman’s Arête (8B) at Fair Head. These were accompanied by some pretty special trad first ascents, including Peace Time (E8 6c) in the Mournes and Long Runs The Fox (E9 6c) at Fair Head, which he climbed solo.

The following year Ricky shuffled off to the US, this time to Tennessee, where he climbed the intimidating roof crack of Hands Across America (5.12, trad), made the second ascent of Clarions Cheery (V11) at Stone Fort and sent The Jackel (5.14b) at Laurel Falls and Apes on Acid (5.13d) at Castle, both second go. Upon returning home he made another addition to the Fair Head boulders, Big Daddy (8A+), before trotting of to Fontainebleau to complete The Big Five: Big Boss (7C), Fourmis Rouge (7C), Tristesse (7C), Big Golden (7C+), and Atrésie (8A).

In 2017 Ricky continued to establish routes, starting with the serious Mirage Club Dancer (HXS) in Donegal, along with a few sport climbs graded 8a+ to 8b. His 2018 contributions were again a mix of trad and sport routes, highlights being Bumble In The Jungle (E8 6c) in the Mournes and then Red and Green (8b) in Inishmor.

“The past few years I’ve been focused more on developing some sport climbing,” says Ricky. “We’ve got the rocks and it feels like an exciting time to be climbing in Ireland.”

When he’s not climbing Ricky does a mix of rope access work and route setting to pay the bills. He also runs a coaching company with his old friend, and Ireland’s top boulderer, Michael Duffy. Ricky abandoned a fixed abode in 2013, preferring to live out of his van, creating enough money and time to travel abroad and spend time climbing in Ireland.

“I’ve been lucky to climb a lot around Europe and North America,” says Ricky. “I travel somewhere new or special every year to find adventures and meet old and new friends. This is one of the things I love most about climbing. But climbing in Ireland is still the thing that I’m most fond of.”

No doubt the future holds many more wild climbing adventures for Ricky, but whatever happens his passion for new routing in Ireland remains undimmed.