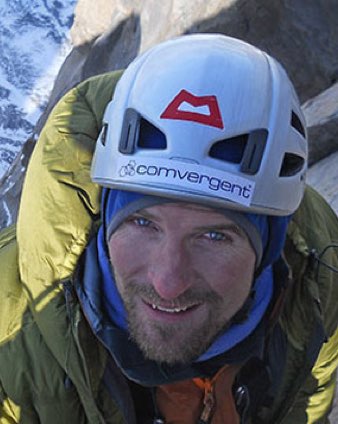 Stu is one of the best alpinists currently operating from the UK. He is also a true all-rounder, just as happy throwing laps on Jerry's Roof (V9/7C) in the Llanberis Pass as he is on the most adventurous alpine terrain.

Stu grew up in the Lakes and spent his formative years developing an obsession with climbing. By the time he was 18 he had fixed his eye upon the goal of becoming a mountain guide. In the early 00s he moved to North Wales and started working at Plas y Brenin, the National Mountain Centre in Capel Curig. In 2008 he completed the gruelling three-year training scheme and got his guide badge.

Climbing for Stu was so much more than a job: it was a lifestyle, and one that he dived into with total commitment. His record of alpine ascents is impressive and includes The 1938 Route (ED2) on the North Face of the Eiger, the Matterhorn North Face, the Piz Badile North Face, The Shroud on the Grand Jorasses, and Beyond Good and Evil (ED3) on the Aguille des Pelerins.

In 2003 he did the first ascent of the Supa Dupa Couloir on the Citadel in Alaska with Twid Turner and Olly Sanders. This 1200m ED4 route was nominated for the Piolet d'Or. The following year he was back in Alaska climbing the first ascent of The Perfect Storm E4 A2+ on Mount Nevermore's East Face.

In 2005 he climbed the first free ascent of Omega VIII on the Petites Jorasses with Nick Bullock. Two years later he did the first ascent of The Good, the Bad and the Ugly A3+ E3 on the South Tower of Paine in Patagonia.

On the rock he has onsighted numerous E6s and has pushed into the E7 grade with ascents of Wreath of Deadly Nightshade (E6/7 6b) and Flower of Evil (E6/7 6b). He also recently climbed his first 8a, the powerful Mussel Beach at Lower Pen Trwyn.

Stu has done a long run of winter seasons in Scotland, and in the process has built up an extensive roster of winter ascents, including repeats of routes such as Sioux Wall (VIII 8) on Ben Nevis.

In 2010 Stu joined Twid for another expedition, this time to climb a big wall on Baffin Island. The ascent of Arctic Monkeys VI A4 V+ involved 18 consecutive nights on portaledges. And more recently, in January 2013, Stu climbed Ragni, a spectacular ice and mixed route on the West face of Cerro Torre in Patagonia.

Llanberis remains home for Stu where he spends time with his son, Elliot. Of course, the next expedition is always on the horizon—a manic text from Twid arrives and the planning process begins again…

"I am strangely attracted to the art of suffering and most of my expeditions have taken me to the wildest, remote parts of the world. Most of these climbs or attempts have at some point taken extremes to the limit and often close to the edge. It's just the very nature of pushing it on hard unclimbed territory. Part of the challenge is managing the risk and surviving. Baffin ‘Arctic Monkeys’ last year was one of my greatest adventures. A real winter big wall epic, we often found ourselves pushing everything to the limit and further at times! To me the best bit about adventure climbing around the world is coming home, Llanberis"