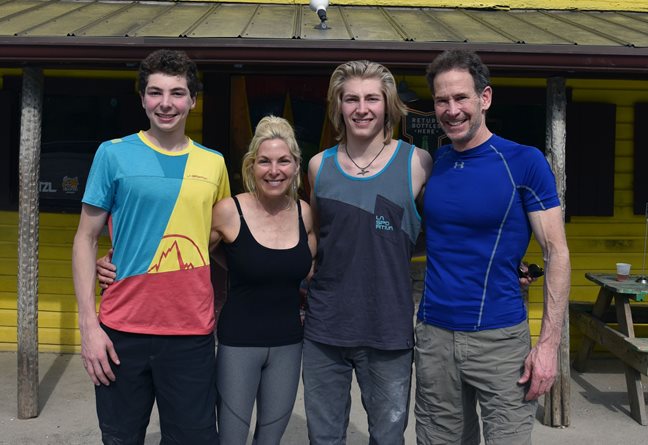 The Hörsts are a remarkable climbing family. Eric and Lisa Hörst, have created, through their enthusiasm and love for the sport, the perfect platform for their two sons, Cameron and Jonathan, to rise to the top of the current generation of young climbers.

Eric was introduced to climbing at age 13 by his brother Kyle on their hometown crags of Lancaster, Pennsylvania. He was immediately hooked on the sport and began exploring methods of training to increase performance. This would be a theme throughout Eric’s life, and a passion that would develop over the course of time.

Throughout the 1980s and 1990s Eric continued to push the boundaries of the sport, repeating the hardest routes along the east coast, as well as putting up cutting-edge routes of his own. A prolific new router, Eric has established over 400 routes across the U.S.

Alongside this, his fascination for training led to an ever greater focus on the performance and coaching aspects of climbing. This has resulted in Eric becoming the most widely published climbing coach in the world, selling hundreds of thousands of copies of his books, such as the best selling Training for Climbing, and having them translated into several different languages.

With a father like Eric, it was perhaps inevitable sons Cameron and Jonathan would be drawn to climbing from an early age. Their introduction to the sport came from playing on the family home training wall around age 2, and quickly progressed to outdoor climbing with the encouragement of Eric and Lisa. As a sign of things to come, the boys were leading their first easy sport climbs by the time they were 7 years old. This early grounding, along with Cameron and Jonathan taking every opportunity to climb throughout the U.S. during family holidays, led to a meteoric rise in the boys climbing standards.

Milestones for Cameron include leading 5.13a (7c+) by age 9 and redpointing three 5.14a (8b+) routes at age 11. Jonathan shares his brother’s ability on rock: cranking out 5.12d (7c) first ascents by age 10 (Schooled by a 10 Year-Old in Maple Canyon, Utah), and in March 2013 he became possibly the youngest person in the world to climb 5.14a (8b+) in his tenth year with an ascent of God’s Own Stone in the Red River Gorge, Kentucky.

On a trip to the Frankenjura in June 2015, Cameron and Jonathan were in fine form. Cameron sent Raubritter, his first 8c, as well as onsighting Hitch Hike the Plane (7c+) and flashing Die Zwei Muskeltiere (5.13b/8a), while Jonathan also onsighted Hitch Hike and sent six other 8b climbs, among other ascents on the trip. Describing Raubritter, Cameron says the line was “hard from first move to last, you could fail on any one of the 20 or so moves to the top.”

Recognition of the Hörst brother’s achievements came in 2013 when Climax magazine awarded them their 'New Kids on the Block' Olga Award. Cameron was also awarded Climbing magazine’s Golden Piton in 2012.

Since then the boys have continued to thrash out high-end sport routes, including two 8c+ routes by Cameron: Pain Makes Me Stronger, Everyday (5.14c) in the Frankenjura and Lucifer (5.14c) in Red River Gorge.

While climbing occupies a huge part of the Hörsts lives, they still find the time for other interests. Both Cameron and Jonathan take time out of climbing in the autumn to focus on American Football, and of course there is the small matter of school!

Eric credits a balance of interests to his longevity in climbing, saying: “climbing has always been a big part of my life, but it has never been my whole life.” With this approach, coupled with their extraordinary abilities, we expect to be seeing a lot more of the Hörsts in the future.