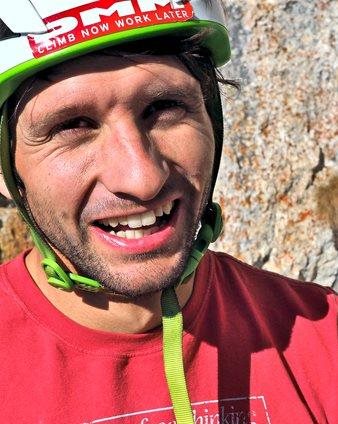 With a climbing resume listing over 100 sport routes between 8a and 9a—including 8a onsights, 8b flashes and a 9a first ascent—boulders up to 8B, E6 British trad onsights, 8a multipitch rock routes, infamous Yosemite big walls and a broad array of mountaineering and alpine routes, it’s easy to deduce that Thomas Dauser is a dedicated all-round climber. It wouldn’t be apparent, however, that this prolific German climber also holds a Ph.D. in astrophysics and works as a full-time scientist conducting cutting-edge research into black holes.

Thomas, who grew up in the southern Frankenjura, was introduced to climbing as a child by his father and began climbing regularly with a kids group when he was 10. At 12 he started competing and came 6th in the German Lead Championship when he was 15. At 16 he climbed his first 8a sport route and subsequently realised that competitions no longer motivated him. After school he moved to Erlangen for university and began to discover his full potential outdoors.

Forced to balance climbing with studying for a duel degree in physics and astrophysics—and later a Ph.D. in astrophysics—Thomas chose to climb for the joy of the sport, rather than chasing hard routes. Nevertheless, he steadily consolidated his grades, amassing an impressive tally of 8a to 8c sport routes and hard boulder problems, some highlights of which were flashing the bouldery 8b route Ramadan in March 2013 during a trip to Suirana, climbing his first 8c, Klondike Cat in the Frankenjura, and climbing four 8A boulders (Walker on Earth, Miss Schweiz, Arête With a Pocket and Teamwork) and an 8A+ boulder (Freak Brothers) during a three-day trip to Ticino, Italy, in early 2015.

In 2016, back in the Frankejura, Thomas climbed another 8c, Odd Fellows. In September 2017 he sent The Last Rights (8c+) and then, two months later, his first 9a, Markus Bock’s fierce 30-move Elder Statesman. In spring the following year Thomas claimed a second 9a, The Essential, on his sixth try of the day.

Shortly before his second 9a, in November 2017, Thomas visited Ulassai, Sardinia, and made the first ascents of several new sport lines, ranging from 7a to 8a, two of which he cleaned and bolted. It was also on this trip that an open project caught Thomas’ attention.

A year on and no one had claimed the route. Thomas returned to Ulassai in December 2018 and, building on his efforts the previous year, made the first ascent of Un gusto della liberta. He graded the route 9a.

“In the beginning I felt the pressure of my expectations and also everyone watching,” says Thomas, “but soon I simply was enjoying every section I climbed and every serious try I did. I think it was a major part of the success that I did enjoy the process and the climbing a lot and forgot about everything else for a moment. And then everything came together and I was at the anchor and just realized then what I achieved in the whole process.”

In recent years, alongside his impressive sport climbing and bouldering ascents, Thomas found himself increasingly drawn to the high mountains and the alpine, enjoying famous mountaineering lines like Innominate Ridge on Mont Blanc and the Watzmann East Face in the Bavarian Alps, and committing alpine routes such as American Direct (ED1) on the Petit Dru and an onsight ascent of Voyage Selon Gulliver (ED2 7b, 12 pitches). He has also climbed numerous routes in the Tre Cime, including Phantom der Zinne (7c+, 18 pitches) on the Cima Grande North Face, which he climbed onsight apart from the crux, which he fell on and didn't have time to try again. He also climbed the eight-pitch 8a,Via Italia, in redpoint style. Thomas also dabbles in ice and winter climbing, enjoying routes such as Ruby Tuesday (M6, 11 pitches) on the Rubihorn North Face.

“I like a lot the different variations of climbing [but] I also like to go with the seasons,” says Thomas. “While I started out with sport climbing, which I am still doing most of the time, I also [do] a lot of bouldering in winter. In the recent years I have been more and more focused and motivated for alpine climbing, which adds a whole new dimension with nature, mountains and also the mental aspect. After some adventures in the mountains, I'm certainly (even) more motivated for sports climbing.”

Thomas complete his Ph.D. in 2014 and works as an astrophysicist at the Remeis Observatory in Bamberg where he conducts research on black holes, specifically testing general relativity by modelling and interpreting relativistic reflection features from these regions of spacetime.

“Working as a scientist offers some flexibility,” says Thomas when asked how he balances work with climbing. “I usually start early and on some days focus on work, and others I can then leave work earlier to train or go climbing. During the week I usually manage to go climbing outside one day of the week and otherwise I'm training at home or in the gym. Actually, I feel like climbing and training for it is a good counter-part to my work where I'm mainly sitting in front of a screen.”

Besides climbing and work Thomas skis, hikes, windsurfs and road and mountain bikes. He is also interested in photography and now tends of pack his good camera when heading out for those picturesque alpine climbs.