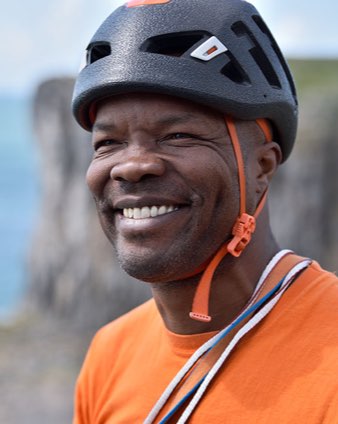 Trev Massiah has decades of climbing and instructing experience, working and climbing around the world. During his climbing career, which spans over three decades, Trev has guided and coached tens of thousands of climbers around the UK and abroad. Likewise, his list of first ascents and new routes—up to 8a sport and E6 trad—is exceptional and spans the globe from the UK to Thailand, China, India and Australia.

Trev started his career in the outdoor industry over three decades ago when, as a 17 years old, he was introduced to climbing through an outdoor centre in Pembrokeshire as part of a six-month work experience placement:

“My first climb was a HVS 5a, Dreamboat Annie, at Porthclais, wearing a fetching pair of white basketball boots. I remember being lowered into the tidal sea cliff in the pouring rain, waves were crashing in, all I was thinking at the time was “this is a bit grim, need to get the hell out of here!” So I did. The guys were surprised I got up it so easily. I didn’t think I had any other options.”

Trev says that he is still “very proud of surviving my first few VDiffs and Severes” and admits that he made all the typical mistakes that teenagers make when starting out on trad:

“I remember looking down to my belayer on several routes only to see that all my runners had fallen out, soloing to the top rather than wasting time placing rubbish gear!”

Trev quickly learned how to place gear properly and led his first E1, Catholics at Avon Gorge, within 12 months of starting climbing and within a couple of years was climbing E2s—many of which were later upgraded to E3.

This progression continued and by the end of 1991 Trev had onsighted numerous E3 and E4 routes throughout the UK. Memorable favourites include Yellow Edge (E3 5c) and Amanita Muscarina (E4 6a) in the Avon Gorge.

The following few years were spent traveling and working abroad in India, Australia, South East Asia, China, New Zealand and the U.S., and in this time Trev sport climbed up to 7b+ and onsighted trad up to E5. It was also during this time abroad and in discovering the rock climbing potential in places like India, China, Thailand and Australia that Trev uncovered the joy of new routing. Subsequently, over the past 25 years, Trev has put up hundreds of new sport routes up to 8a and made many onsight ground-up first ascents of trad routes up to E6. It is this extensive new development of routes and crags, particularly in places like Tonsai, The Keep and Lao Liang in Thailand that really make Trev stand out within the climbing community.

“I was running regularly,” says Trev, “doing hundreds of push ups, pull ups and sit ups every day. I got pretty strong and light but ultimately failed due to poor climbing technique. At about that time, I was starting to develop a keen interest in coaching. During the next five or six years, my technique improved greatly due to the amount of coaching I was doing. I managed to climb my first 8A at the age of 49, undoubtedly heavier and much less strong than when I was 39.”

For the last eight or nine years Trev has focused on developing coaching programs for outdoor sport climbing and developing his business, Rock and Sun, as a leading international tour operator for climbing and bouldering holidays. As a result, Trev’s personal climbing continues to improve and he doesn't seem to show any signs of slowing down.

In his spare time Trev enjoys fishing, poker, cooking and kayaking (he is a BCU Level-3 accredited kayak instructor). He also dabbles, when the opportunity arises, in ice climbing and mountaineering—he has summited Amadablam, in Nepal—and he boulders a few times a year, in Albarracin or Fontainebleau.

“Climbing is the greatest waste of time ever invented,” says Trev. “I love the people you meet, the places it takes you, as well as the physical and mental challenges it brings.”