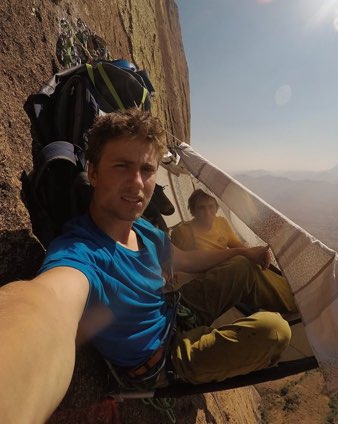 Born to be in the mountains and with impressive bouldering, trad, sport and first ascents to his name, Calum is a rising talent on the UK climbing scene.

Among his list of achievements are 8b sport climbs, including Amazonas (8b/+) in Voralpsee, Switzerland and the first ascent of The Force Direct (8b) at Brin Rock in Scotland, and 8A boulders, including Shallow Cave in Rocklands, South Africa. Over the last couple of years he has turned to bigger multipitch objectives, including a 15-hour speed ascent of five towers of the Tre Cime in the Dolomites and a very close attempt on End of Silence (8b+, 11 pitches) in the Berchtesgaden Alps. Most recently he established Blood Moon, a 13-pitch 8a+ big wall in southern Madagascar, with Alan Carne and Robbie Phillips.

Born in 1997 and raised in a climbing-orientated family in Ullapool in the Scottish Highlands, Calum was introduced to all aspects of climbing by his parents. Adventurous family holidays to climbing locations in Europe, the U.S. and at home in the UK ensured that Calum and his brothers, Eadan and Duncan, were competent all-round climbers by the time they entered their teens.

Calum recalls his first hard trad ascent when he was 11 years old, an E2 at Reiff called The Executioner:

“I was rushing and unsure of my gear,” says Calum. “I remember Mum and Dad at the bottom being really scared for me!"

The Cunningham youngsters were introduced to route and boulder development young, travelling out to the Scottish Summer Isles with their parents and developing new trad lines during the summer holidays. Calum’s hardest trad ascent to date is the first ascent of an E6 6b on the Summer Isles called Bobby Goes Down, which he cleaned and established when he was 16.

Without a local wall, Calum and his brothers would go out searching for boulders after school, wandering their local hills and enjoying the landscape.

“I enjoy just walking in the hills as well,” says Calum. “I like being out in cool places, climbing just adds to that."

The boys would use the rainy days to scout for potential boulders and then go back on dry days to clean and work them. As such, Calum has dozens of bouldering first ascents to his name and is well versed in navigating unexplored rock.

This experience has served Calum well and in recent years he’s been pushing into more adventurous territory, capped in 2018 by Blood Moon, a technically demanding, 13-pitch 8a+ big wall climb he established with Robbie Phillips and Alan Carne in the remote Tsaranoro Valley in Madagascar. The team took six days to bolt the route on lead and then Calum and Robbie made the first ascents over three days, running out of food and water along the way.

“It's hard to summarise the trip in a few words,” Calum said shortly after returning from the trip, “but this expedition has definitely been the most epic and rewarding so far.”

You can read about Calum’s experience on Blood Moon in his DMM article.

Calum is currently studying a three-year course in Forestry Management at Inverness University of the Highlands and Islands and finding time to climb around his studies.